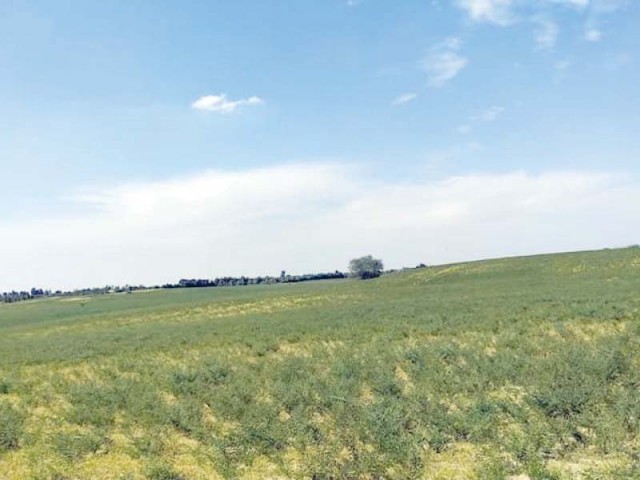 NOORPUR THAL: Around 90% of the population of Noorpur Thal is dependent on agriculture and waits for rainfall to harvest crops.

When sufficient rains occur during the season, the farmers cultivate chickpea in their fields, which is ready to harvest in five months.

The produce harvested per acre fills two sacks. After the crop is harvested, the farmer fulfils the dietary needs of his own family for a year from it. If rains during the season are insufficient for harvest, the quantity of production decreases, because of which farmers barely recover their investment from the crop.

Moreover, many local people reportedly get trapped in bank loans because of a shortage of revenue from crops.

The main reason for this situation in the area is the absence of industries causing unemployment in the area.

If there are normal rains, the tehsil offers a lush green view for around eight months each year.

The people of Noorpur Thal are also very hospitable. “Any outsider visiting the area will always be welcomed with the best food, including a breakfast of desi chicken and pure dairy products,” a farmer said.

It is spread over a 1.2 million acre desert and has a population of 300,000. In summers, the temperature rises up to 52 degrees Celsius because of hot sand dunes and warm winds.

Chickpea produced here is free of fertilisers and pesticides.

The biggest market for the crop is in the provincial capital, where there is a high consumption of chickpea and gram flour.

Mohammad Shafiq Waghara, a farmer from Noorpur Thal, told The Express Tribune that local farmers are exploited when the crop is harvested. “Traders in the market pay Rs7,000 to Rs8,000 per sack to farmers but get Rs15,000 from the market.”

So far, the rate of chickpeas has not been fixed by the government, said Rana Mohammad Saleem, another local farmer. “The government should fix the rates for chickpeas like wheat and other crops.”