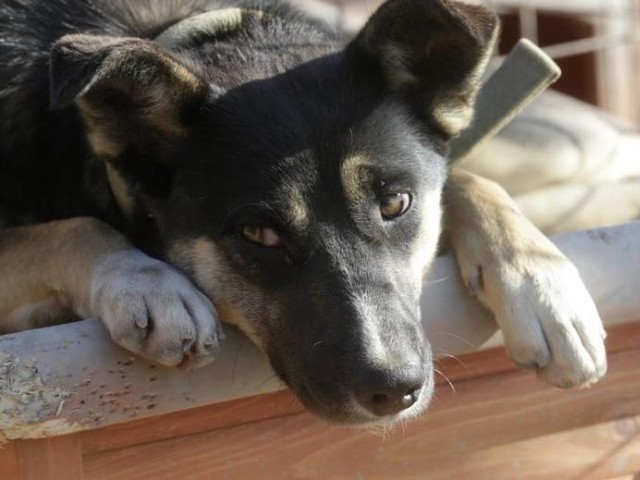 KARACHI: At least 72 people, many of whom were children, were attacked by stray dogs across the metropolis on Saturday.

While health officials denied any shortage of vaccines, they expressed the worry that the rising number of dog-bite incidents might soon create a critical situation if measures are not taken to manage the city’s population of stray dogs.

The highest number of patients was reported at the Indus Hospital, with Muhammad Iqbal Gohar, the manager of the hospital’s Rabies Prevention Centre, confirming that a total of 30 cases were brought in on Saturday.

“The number has increased this month,” Gohar told The Express Tribune, claiming that 30 to 40 new patients arrived every day at his facility alone. He stated that on average, the hospital treats 100 patients – including follow-up cases – in a single day.

However, he gave reassurances that there was no shortage of anti-dog bite rabies vaccines at the centre, adding that the hospital also had sufficient stock of the rabies immune globulin shot.

Meanwhile, 16 patients came to Dr Ruth Pfau Civil Hospital Karachi after being attacked by stray dogs on Saturday. Hospital management said that over 80 dog-bite victims were being treated at the hospital.

“The number of patients has been growing recently; we have been receiving over 20 new patients a day for the last couple of weeks,” a senior doctor at the hospital confirmed to The Express Tribune. “There has been a tremendous rise, but fortunately, we have enough vaccine stock.”

Separately, Jinnah Postgraduate Medical Centre (JPMC) executive director Dr Seemin Jamali, speaking to The Express Tribune, said that 15 new dog-bite victims were brought to the hospital on Saturday, while a total of 106 patients were being treated for such injuries there at present.

Dr Jamali too said that there was no shortage of the necessary vaccine, but pointed out that the rate of such incidents was rising every day. If the trend continues, she feared, there were chances of a shortfall in the immune globulin vaccine. “Many of the hospitals refer their patients to JPMC,” she added.

According to Dr Jamali, most of those attacked by stray dogs are children, while the majority of cases are reported either early in the morning or late at night.

Meanwhile, Indus Hospital CEO Dr Abdul Bari said that over 7,000 dog-bite patients were treated at the hospital last year. “We do not just treat patients from within the city, but also from outside of Karachi, including from Balochistan,” he said.

“The risk factor goes up if patients are delayed in reaching the hospital and receiving treatment too,” he explained, adding that many hospitals failed to properly manage cases where patients were suffering from animal bite injuries. He claimed that the Indus Hospital was also involved in training other medical professionals in how to treat such patients.

Dr Jamali stated that the city’s stray dogs should be controlled through a multi-sectoral approach. “Vets, medical doctors and animal rights organisations will have to find a way to manage the issue.”

In November, the Sindh government had decided to launch a massive drive to control the problem of increasing stray dogs. An official from the Sindh local government department informed The Express Tribune that the campaign is expected to begin next month.

“Normal dog culling is underway,” he shared. “The government is aware of the severity of the matter, with dog-bite cases being reported across the country.”

He said that the project had been approved, while a helpline was also being established. “It is a medium-term programme, which will help us get rid of the problem once and for all,” he claimed.

According to the official, the first year of the campaign would see 70 per cent of the stray dog population being vaccinated, followed by 20 per cent in the second year and the remaining 10 per cent in the third year. He added that the levels of aggression in the dogs would drop after they received the vaccinations.

“The other provinces have also reached out to us and want us to share the programme with them,” he maintained.

At SPSC meeting, Dr Kaleem Imam’s transfer remains the elephant in the room