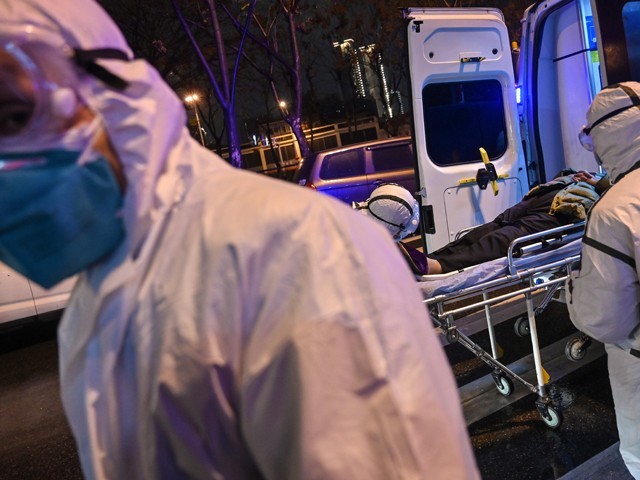 In this photo taken on January 25, 2020, medical staff wearing protective clothing to protect against coronavirus arrive with a patient at the Wuhan Red Cross Hospital in Wuhan. PHOTO: AFP

Quashing rumours that Pakistani nationals were in any imminent threat of contracting coronavirus, the Foreign Office on Sunday said that over 500 students and other community members in Wuhan, and in other parts of China, are all safe.

China has expanded drastic travel restrictions to contain the viral contagion that has killed 56 people and infected nearly 2,000, as the United States and France prepared to evacuate their citizens from a quarantined city at the outbreak’s epicentre.

China has locked down the hard-hit province of Hubei in the country’s centre in an unprecedented operation affecting tens of millions of people to slow the spread of a respiratory illness that President Xi Jinping said posed a “grave” threat.

“This ministry and the Pakistan Embassy in China are actively monitoring the situation of Corona virus outbreak in Wuhan, China. The Embassy in Beijing and other sub-Missions in China are also in touch with the Pakistani community as well as Chinese authorities,” FO spokesperson Aisha Farooqui said in a statement.

Coronavirus: How to stay safe

“Over 500 students and other community members in Wuhan, and in other parts of China, are safe. There is no report of infection in any Pakistani community member thus far.”

The statement said that the Pakistani diaspora has been reassured of full support and requested to follow health protocols issued by the Chinese authorities and stay indoors. “The current situation calls for greater patience and perseverance,” it added.

Noting the increase in the number of cases and its human-to-human transmission, the Ministry of Health of China has put additional measures to reduce the risks associated with the viral infection. “We laud the resolute efforts of Chinese authorities in dealing with the outbreak of the virus,” Farooqui was quoted as saying.

Students and community members have been advised to regularly visit the Embassy’s website www.pakbj.org. Those who are not yet registered are also being encouraged to register with the Embassy, online.

For information and assistance, the following numbers can be contacted:

Earlier today, Minister of State Zafar Mirza had also confirmed that no Pakistani student in Wuhan City had contracted coronavirus.

In a tweet, Mirza reassured families of over 500 Pakistani students in the Chinese city where the virus had originated. “No case of coronavirus among them [Pakistanis students] and our Embassy is actively in touch with them.”

Originating in Hubei’s capital of Wuhan, the virus has spread throughout China and around the world, with cases confirmed in around a dozen countries as distant as France, Australia and the United States.

The World Health Organisation puts the number of confirmed cases reported from mainland China at 1,975. “This includes 324 severe cases and 56 people who have died,” the WHO added.