Woman dies as US Embassy SUV rams into car in Islamabad

Woman dies as US Embassy SUV rams into car in Islamabad

Police arrest driver of the vehicl­e which drove into a privat­e car in federa­l capita­l
By Iftikhar Chaudhry
Published: January 26, 2020
Tweet Email 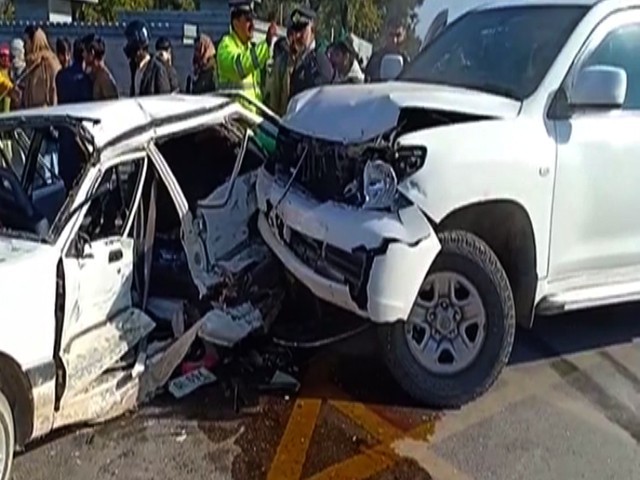 Police arrest driver of the vehicle which rammed into a private car in Islamabad. SCREENGRAB

ISLAMABAD: An SUV belonging to the US Embassy drove into a car on a main artery of the federal capital on Sunday, killing a woman and injuring five members of her family, police said.

The deadly accident happened on Margalla Road near Faisal Avenue Chowk when the speeding Toyota Land Cruiser of the US Embassy hit the Suzuki Khyber car from behind, killing the woman on the spot, Farrukh Rashid, senior superintendent of the Islamabad Traffic Police, told the Xinhua news agency.

One of the vehicles involved in the accident might have driven through a red light, according to police who wouldn’t identify the errant vehicle. The police arrested the Pakistani driver of the US Embassy, named Amjad Zaman, and registered a case against him at Margalla police station.

The casualties were driven to the Pakistan Institute of Medical Sciences (PIMS) Hospital, where medics said one of the injured was in a critical condition. The deceased woman has been identified as Nadia.

Usama Ashfaq, son of the deceased woman, told the police that he was informed about the accident while he was travelling to his shop in Sector E-11/3 of Islamabad. He rushed to PIMS, where medics told him that his mother had already expired while his father, Ikhlaq, was being treated for his critical injuries.

Usama told the police that his cousin Sahkeel Ahmed was on the wheel when the accident happened. He accused the driver of the US Embassy vehicle of reckless driving.

Shakeel’s wife and his two minor daughters also sustained injuries in the incident, he added. “One of the girls is said to be in a critical condition.”

Accidents involving vehicles belonging to diplomatic missions, especially the US Embassy, have been frequent in recent years and in most cases the drivers got away unpunished by invoking diplomatic immunity.

In July 2010, an officer attached to the US Embassy’s Force Protection Department hit and killed a young man riding a motorcycle on 7th Avenue.

In 2011, a CIA contractor, Raymond Davis, caused countrywide outrage after he killed two persons when he ran over a motorcycle in Lahore. The deadly incident had strained ties between Washington and Islamabad. Davis went scot-free after paying blood money to the families of the victims.

With additional input from agencies.