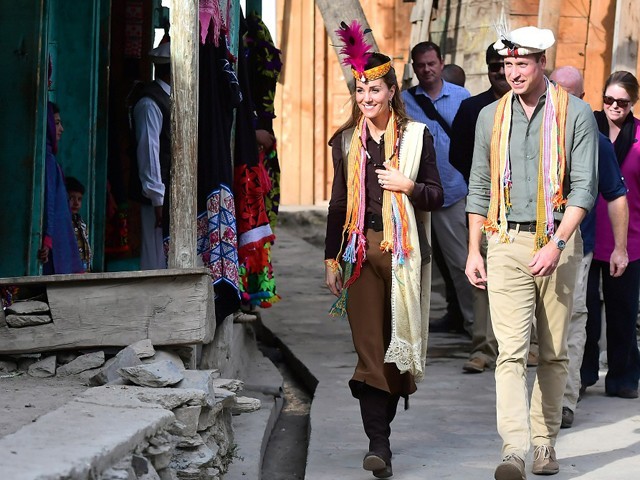 William and Kate visit a settlement of the Kalash people in Chitral. PHOTO: REUTERS/FILE

ISLAMABAD.: More than six months after British Airways resumed operations to Pakistan, the United Kingdom on Friday relaxed its travel advisory for the country in a major step welcomed by Islamabad as “great news”.

The UK changed its travel advice for Pakistan in almost five years, allowing its citizens to travel by road to the north of Pakistan as well as the scenic Kalash and Bamboret valleys, the UK High Commission in Islamabad said on Friday.

The first major update of the travel advice by Britain’s Foreign and Commonwealth Office (FCO) since 2015 is the result of a comprehensive review of Pakistan’s security situation based on a wide-ranging assessment of the country’s security situation.

Pakistan has made tremendous strides towards bettering the internal security situation. In June, British Airways resumed operations to Pakistan after 11 years of suspension, when the airline’s Boeing 787 Dreamliner touched down at Islamabad International Airport.

In October, Pakistan rolled out red carpet for the Duke and Duchess of Cambridge, as the royal couple undertook an array of engagements over five days, which took them as far as Chitral district of Khyber-Pakhtunkhwa.

A statement issued by the British High Commission on Friday mentioned the return of British Airways to Pakistan and the visit by Prince William and his wife Catherine, as major milestones in the “improved security situation” in Pakistan.

“The improved security situation allowed for the return of British Airways to Pakistan in June 2019 and the visit by The Duke and Duchess of Cambridge in October 2019,” it said. “Among other changes, the advice now allows for travel by road to the North of Pakistan as well as the Kalash and Bamboret Valleys,” the high commission said.

The announcement follows the arrival of Dr Christian Turner, as the new high commissioner to Pakistan. “Following my arrival in December 2019, I made this review of the travel advice a priority,” the statement quoted Turner as saying.

“It is great credit to the hard work of the Government of Pakistan in delivering improved security over the past five years. I am delighted that British nationals will be able to see more of what Pakistan has to offer,” he added.

However, Friday’s update reduces the restriction on section of the Karakoram Highway between Mansehra and Chilas alone. “Travellers may bypass this section by taking the alternative route through the Kaghan Valley and Babusar Pass,” it said.

Friday’s announcement was warmly welcomed by the Pakistani leadership, who described it as a major step towards the government’s efforts to boost tourism, attract foreign investment and further strengthen relations with the UK.

“This is great news as it will address two most important economic issues facing Pakistan today: employment & our current account deficit, by bringing in tourism & investment which in turn will provide employment opportunities especially for our youth,” Prime Minister Imran Khan tweeted.

This is great news as it will address two most important econ issues facing Pak today: employment & our current account deficit, by bringing in tourism & investment which in turn will provide employment opportunities esp for our youth. https://t.co/8iQI6wKnwz

Foreign Minister Shah Mehmood Qureshi also lauded the announcement. “This change in travel advice is encouraging … [and] will further strengthen Pakistan-UK relations,” he wrote in a tweet.

“Pakistan; land of peace and progress with incredible natural beauty, warmth & hospitality. This change in travel advice is encouraging, the first major update to the UK’s travel advisory to Pakistan since 2015. This will further strengthen Pakistan-UK relations. Welcome to Pakistan.”

Earlier, Foreign Office spokesperson Aisha Farooqui said in a statement that the government and the people of Pakistan welcomed the FCO’s announcement of relaxing its travel advice for the British nationals for Pakistan.

“A positive step forward, forging even stronger and closer people-to-people links between Pakistan and the UK,” she said on Twitter. “Look forward to welcoming more tourists, investors, academics and other visitors from the UK.”

“Pakistan is now open to the world, with peaceful and welcoming environment,” she said during the meeting. High Commissioner Turner said the travel advisory revision would pave the way for enhanced travel and connectivity between the two countries.

“I have been to the UNESCO sites and amazed to see the tourism potential of Pakistan,” Turner said, adding the credit went to the government of Pakistan under the leadership of Prime Minister Imran Khan for ensuring better security conditions in the country.

The FCO provides travel advice based on objective information to help British nationals make better informed decisions about foreign travel. In 2018, there were an estimated 484,000 visits by British nationals to Pakistan. There are 22 weekly direct flights to the UK.