Comment: What Pakistanis can learn from 15-year-old Coco Gauff

Comment: What Pakistanis can learn from 15-year-old Coco Gauff 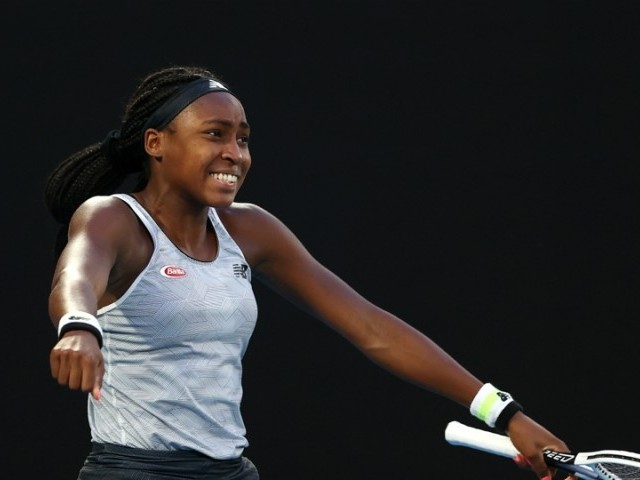 Hailing from America, Coco Gauff defeated former world number one Japanese tennis star Naomi Osaka at the Australian Open on Friday. The 15-year-old — who has now landed herself amongst some of the best tennis players in the world — was taught by her father, Corey Gauff and didn’t always have the best facilities to train.

Regardless, she started working at the age of eight and seeing her determination, her parents gave up their careers so they could focus on her tennis training.

She was later sponsored by Serena Williams’ coach, Patrick Mouratolglou to receive high-level training. But isn’t that the story of many other sports stars in the world? Everyone fights adversity, but with a little help they blossom into something the world has never seen.

While everyone has their own fair share of struggle, there is a lot that one can learn from Gauff, especially us Pakistanis.

One of the first things that Gauff’s story teaches us is the importance of getting girls into sports. In a country like Pakistan, girls are more often than not pulled out of schools, let alone receive proper sports training. Moreover, everything else which is not spelled cricket (or men) receives nearly no attention.

And if the girls, somehow or the other, do tend to succeed and earn a medal for the country, they are forgotten in a matter of a few days or something other than their sporting abilities become the topic of the town. Case in point: Sahib-i-Asra. The 21-year-old Pakistani sprinter not only won the first international medal for herself during the 2019 South Asian Games but helped in improving the country’s tally in athletics with three medals.

The media flocked her when the story of her having a cleric father surfaced, but nearly no one welcomed her at the airport when she did something in athletics for Pakistan. Let alone recognition, she was not even given a plane ticket to travel back to Faisalabad after returning from the South Asian Games, and had to travel by bus from Lahore to her hometown.

Back to reality: Sprinter Asra unfazed by lack of recognition after 2019 SAG heroics

Also, the problem in Pakistan does not only lie in the government or responsible authorities for not doing enough, but the mindset of the society also halts girls’ progress in sports.

Many communities across the country do not even let girls go to school after they’ve hit puberty. Unlike Gauff’s parents, a Pakistani girl’s parents are more worried about her marriage and dowry preparation, instead of her education when she enters her teens. And if she is somehow an athlete, her skin colour may become a problem for the groom’s family since she trains in the sun.

The attire for certain sports in also a problem since whatever the girls wear is termed “un-Islamic”. Most families consider a girl learning how to cook, sew and take care of children as achievements — achievements that usually go unappreciated— but landing amongst the top of the world in sports is somehow “disgraceful”. On the other hand, if their son does it, it brings immense pride.

At the end of the day, a 15-year-old — be it Gauff or any other Pakistani girl — is a teenager trying to find meaning in life through sports or education or maybe something else because sooner or later the real life is going to hit them hard.

Sports training, or any extra-curricular activities for that matter, is essential for the growth of a human, male and female both, as it helps them in building their own individual personalities. It gives the young minds the courage to face the world on their own, helps them conjure nerves of steel and prepares them to take on the best in the world without any fear — just like Gauff.