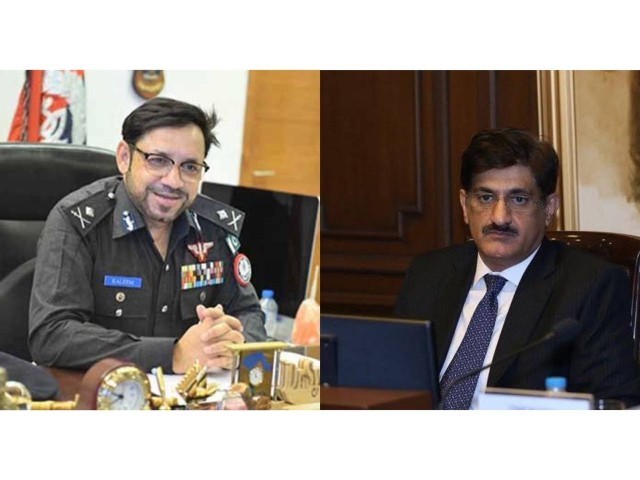 KARACHI: Levelling serious allegations against Sindh police chief Dr Kaleem Imam on the floor of the Sindh Assembly on Thursday, provincial chief minister Syed Murad Ali Shah said that the Sindh government and entire cabinet wanted to get rid of the “incompetent” Inspector General of Police (IGP) who had failed to deliver, but he was “stuck to his position” and was receiving “dictation” against the ruling party.

“I know very well with whom he talks on the phone, and [I know] he is partisan,” said the chief minister. “No one will be allowed to violate the rules. Only those officers will remain in Sindh who toe provincial policy.”

“If you [police officials] become partisan because of the IGP, then the situation will become worse,” he warned, adding that the allegations against the Pakistan Peoples Party (PPP) ministers were baseless. “This is a political move to target the ministers.”

Briefing the house, Shah said that some time ago, he had received information that police officials would lodge cases against people in the Sindh government. “I asked the IGP to conduct an inquiry into it, by assigning an honest officer to look into it, but he ignored it,” claimed the CM.

Shah also brought up a statement issued by a target killer, saying, “A terrorist, who was given media access while in police custody, alleged that he had held meetings with me.” Claiming that he had publicly denied the allegations and offered to launch an impartial inquiry into it, he added that it was an effort to defame him.

He stated that SSPs were appointed in the province after consultations between the CM and the IGP, disclosing that Imam had recommended Khan for the post of Shikarpur SSP. “But after his posting, there were frequent complaints against him. Later, an AIG inquired into the matter and submitted a report saying that Khan was not as honest as stated by the IGP,” he went on to say. “The inquiry report was submitted to Imam, who did not disclose it.”

The CM said that Sindh Energy Minister Imtiaz Shaikh also drew Imam’s attention to complaints against Khan, but no one paid heed to them because he was a favourite of the police chief.  “The police have become a party, conducting politics, but we will not tolerate this in our province,” he maintained.

“Why did the police not arrest Shaikh and [Sindh Information and Archives Minister] Saeed Ghani if they were criminals?” he asked, adding that a two-year-old “fabricated” report had now emerged with accusations against Ghani. “Enough is enough. We cannot afford incompetent and biased officers in the province. Action will be taken against any person who works against Sindh’s mandate.”

Shah pointed out that four IGPs had been transferred in Punjab, but nobody had created an issue about it. He further reiterated that he had taken Prime Minister Imran Khan into confidence over the transfer of the police chief. “Not just once, I talked to the prime minister three times about this issue. He assured me it would be resolved, asking me to send him three names [for Imam’s replacement],” he said, remarking that he did not have to inform opposition leaders about his conversations with the PM.

Adding that the transfer was a matter involving Sindh and the federal government, he said the Sindh government reserved its constitutional right to appoint the police chief. He added that he had been informed that the PM would take action in this regard on his return from the World Economic Forum.

Meanwhile, PTI’s parliamentary leader in the Sindh Assembly, Haleem Adil Sheikh, said that the PPP government had always tried to dictate to police officers, but on failing, it would transfer them.

“They are now calling Imam dishonest,” he said, talking to the media outside the Sindh Assembly. “I want to know why the Sindh government recommended his name for this coveted post then.”

The opposition leader added that the Shikarpur SSP was being “punished” for telling the truth and taking action against criminals and the mafia.

The house again passed a law to empower the CM to appoint the provincial ombudsman as well. The law was previously passed to transfer the power from the Sindh governor to the CM, but the governor refused to give his assent.

On Wednesday, the Sindh cabinet had given its nod for the reconsideration of the bill, expressing concern over the governor’s refusal. With the bill being passed again, it will now become an act even without the consent of the governor.

The session was prorogued for an indefinite time.