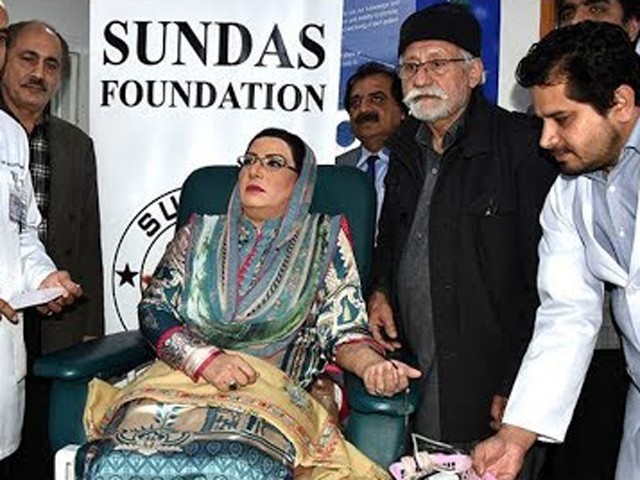 Information minister was filmed while ‘posing’ to donate blood for thalassaemia patients. SCREENGRAB

Special Assistant to Prime Minister on Information and Broadcasting Dr Firdous Ashiq Awan’s attempt to raise awareness about thalassaemia patients through a ‘symbolic’ blood donation backfired with social media users accusing her of ‘faking it’.

Pictures and footage of an event organised by Sundas Foundation in Lahore on Saturday went viral on social media, in which the SAPM can be seen sitting on a chair surrounded by medical staff while posing as if she was donating blood.

I am a blood donor & every time I donate blood, it brings me more good physical health and n immense mental pleasure that I am saving a life
I am disgusted to see this blood donation stunt by Dr. Firdous Ashiq Awan, what was the need of this drama?#Shame
pic.twitter.com/plDUMgXJiS

An infusion set without needle was placed on her arm, other side of which was connected to an already filled blood bag, giving an impression as if it was donated by the PM’s aide.

“I have donated blood to the Sundas Foundation 22 times in the past, in addition to today’s one,” she told APP after the event. “It is nothing short of a reward if someone’s blood saves anyone’s life,” she said and added that Prime Minister Imran Khan appreciated social work a lot.

Firdous Ashiq Awan caught faking it. Special Assistant to PM was raising awareness about thalassaemia patients and was shown donating blood, which she didn't.
pic.twitter.com/h97FOgP6eM

Awan later expressed her displeasure over “wrong dissemination” of pictures and footage of the thalassemia awareness event by a section of media, terming it highly condemnable.

In a tweet, the SAPM said that the event was about media coverage for creating awareness in public regarding importance of donating blood for thalassemia children. However, the footage and pictures of the event were wrongly presented in the social media, she added.