Clean water is an expens­ive commod­ity in the city and an added burden for the poor
By Syeda Sana Batool
Published: January 18, 2020
Tweet Email 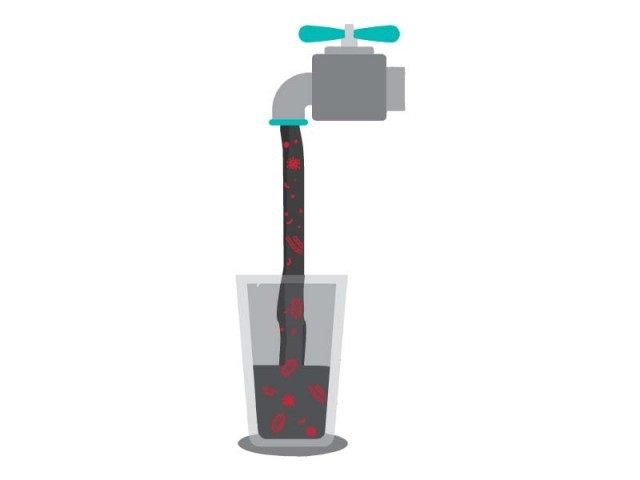 KARACHI: The great American poet WH Auden famously observed, “Thousands have lived without love, not one without water.”

Had Auden lived in Karachi, he would have seen in truth how many die from lack of access to potable water. The country’s economic hub is slowly but surely poisoning its own population with its dire water shortage, be it natural or manmade, as some claim.

In the metropolis, access to clean water is directly dependent on where you live. For the privileged, paying a premium for clean water has become the norm. For the less fortunate, clean water is yet another burden on their pocket – one they can ill afford.

One thing is for certain, though. If you live in Karachi, you do not simply turn on the tap to get yourself a glass of water. In this great city of over 20 million people, whether you live in one of the upscale localities or a shantytown, you usually have to buy water from tankers. Sometimes you even stay up all night waiting for the tanker to turn up. After all, business is thriving, thanks to water contamination and the lack of infrastructure – and, of course, the ‘water mafia’ that controls the tankers.

The larger debate, however, is not that of scarcity. According to experts at the Pakistan Medical Association, over 30,000 people die here after consuming contaminated water each year, most of them children.

The high prevalence of waterborne diseases here is directly related to contaminants such as municipal sewage and industrial waste mixing into the potable water lines. These diseases include diarrhoea, cholera, typhoid and hepatitis A and E.

According to the Pakistan National Conservation Strategy report, over 40 per cent of disease outbreaks in Karachi can be attributed to unsafe drinking water. Another report, meanwhile, states that more than 36 per cent of the potable water in the city contains deadly pathogenic bacteria. The presence of faecal material in water samples is another cause for alarm, spreading diseases such as typhoid.

Dr Naseem Salahuddin from the Indus Hospital explained that the salmonella typhi bacteria, which causes extensively drug-resistant typhoid, is present in polluted water as well as food cooked with contaminated water.

“When a person has typhoid, this is present in the patient’s stool and eventually it enters the sewage system. If the sewage contaminates fresh water and this water is consumed without boiling or filtering, the illness is transferred,” she said.

The contaminated water is rooted in several factors: the illegal supply of water by the water mafia, pipelines punctured for illegal connections, illegal sewerage lines and manholes, decaying pipelines, political rivalries and so on. In the western and southern parts of the city, the areas that are worst affected are Ibrahim Hyderi, Landhi, Shireen Jinnah Colony, Akhtar Colony and Kashmir Colony.

For Hassan Abbas, a resident of Akhtar Colony with three children, life became even more difficult when he had to switch to bottled water. Not only did this add to the financial burden on his shoulders, it also shattered his dream of educating his daughter.

“I had to pull my daughter out of school. My monthly income is Rs20,000; I pay Rs8,000 in rent for our house, and now drinking water costs us at least Rs2,500 each month,” narrated Abbas. “No matter how hard I try, I will never be able to send her to school.”

His wife chimed in, saying that the tap water dried their skin out when they bathed in it. “When my children take a bath with it, it feels like there is a layer of dirt all over their body,” she said. “I tell them to rinse off with a jug of filtered water to remove the impurities of the tap water.”

Even the water supplied by tankers is often yellow in colour. In the streets of Akhtar Colony, young children carrying water bottles to nearby shops are a common sight. These shops, they say, provide filtered water, often in “sealed containers.” The shop owners claim that the water they sell is clean and safe to drink.

“We have our water tested at a private hospital. It’s clean,” maintained Shahzad, the owner of one of these shops. He said that each bottle costs Rs30, with three bottles a day being enough for a small family if they use it for drinking and cooking.

Dr Salman Shah, who runs a private clinic in the colony, revealed that a large number of his patients have diarrhoea, fever, ulcers and gastritis. The majority of them are women and children. “Areas deprived of proper sanitation and sewerage systems fall prey to these diseases, which can be fatal,” he added.

Nearby, in Kashmir Colony, the situation is similar.

“Sometimes, the water in the taps is black and has a strange odour, like sewerage,” said Shakeel, who lives there. “It takes a lot of time to clean our water tanks because of this, and again, we need a lot of water for that too. We have stopped taking water from the main lines and now buy it for almost everything, from drinking to cleaning. What’s the use of a water supply when it’s filthy most of the time?”

Jahanzeb, the prayer leader at a local mosque, claimed that when water is supplied to their houses, the first ten minutes see only dirty, reeking water come through the taps. After that, it clears up but remains extremely salty.

“Sometimes, doing ablutions at the mosque is very difficult because of how foul the water is,” he said, adding that seeing insects crawling in the water was a frequent occurrence.

Children here often fall sick due to water consumption, with fever, gastritis and measles being common in the colony.  And it is not only humans that are at risk from this water. Residents of Kashmir Colony no longer give unfiltered water even to their livestock, maintaining that it is hazardous for the health of their animals.

Water is usually supplied here on donkey carts carrying small water tanks – the narrow lanes in the neighbourhood are inaccessible to the much bigger tankers.

Munir Khan, who runs one such service, said he buys water from a municipal supply service near Korangi Road. “One tank costs Rs2,500 – a family needs at least three such tanks a month,” he stated, adding that they checked the water before supplying it to houses, while providing it for free to the mosques and madrassah.

The Karachi Water and Sewerage Board (KWSB) is responsible for the municipal water supply as well as for controlling wastewater and sewerage in the city. However, its aging system is unable to handle the demand for clean water and sewerage management. It does not have the capacity to distribute water, fix its decaying, rusted pumps, reduce water theft, mend its leaking supply lines, curb the power of the water mafia and prevent the mixing of potable water with waste.

Syed Mohsin Raza, the KWSB People’s Labour Union general secretary, conceded that the body was mismanaged. According to him, the mixing of sewerage with fresh water is due to the aging infrastructure here. “The pipelines are rusted, and since the water board is drowning in loans, it does not have the capacity to build new infrastructure and install new pipelines,” he explained. “The infrastructure can only be developed when people start paying their dues and stop filling their pockets.”