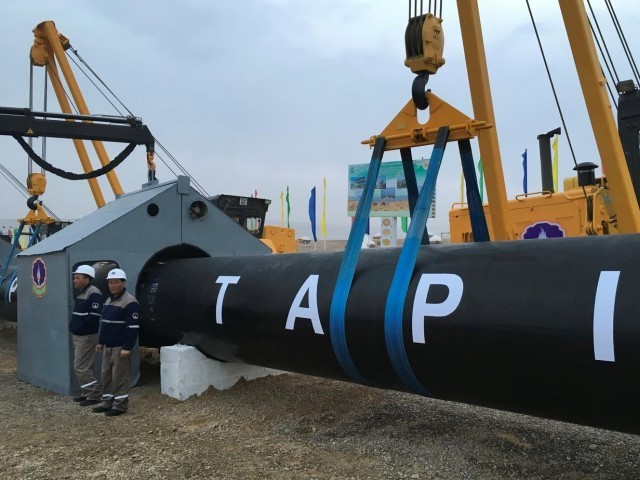 ISLAMABAD: Certain lobbies appear to be working to delay the Turkmenistan-Afghanistan-Pakistan-India (Tapi) gas pipeline project, sparking worries about the country’s energy security and upsetting the government of Turkmenistan, officials allege.

Officials in the Petroleum Division are trying to delay the Tapi project in a bid to create a level-playing field for liquefied natural gas (LNG) imports, they allege.

Sensing such moves, officials of the Turkmenistan government recently visited Pakistan and held meetings with high-ups of the Petroleum Division, Foreign Office and top brass of the military to convey their concern.

Pakistan’s top civil and military leadership has already given assurances to Turkmenistan that Pakistan is committed to executing the strategic Tapi pipeline project in order to ensure energy security.

However, according to officials, certain lobbies are active that want to import more LNG, though many sectors are not ready to consume the imported LNG.

Being the major consumer of LNG, the power sector has already conveyed to the government that it will not take LNG deliveries beyond 2025 when a long-term agreement for gas import from Qatar will be taken up for review.

Owing to the reluctance of power and other sectors to consume expensive LNG, Pakistan LNG Limited (PLL) was compelled to scrap a 10-year LNG supply tender a couple of months ago despite pressure from the Petroleum Division to open financial bids.

Still, officials of the Petroleum Division are allegedly insisting and urging the prime minister to import an additional 200 million cubic feet of LNG per day (mmcfd) from Qatar. “These lobbies are working to delay the Tapi pipeline project by feeding half-cooked information to the country’s economic managers,” an official remarked.

According to sources, Special Assistant to Prime Minister on Petroleum Nadeem Babar told the country’s economic managers in a recent meeting of the Economic Coordination Committee (ECC) that the Tapi pipeline gas would be 10% expensive compared to imported LNG.

However, officials pointed out that it was contrary to fact and a summary seeking the constitution of a Tapi price review committee was tabled before the ECC without any analysis by comparing prices of Tapi gas and LNG.

Babar has also been a strong advocate for additional LNG imports and believes it is an ideal time for Pakistan to strike more LNG contracts this year.

Officials stressed that Tapi gas was still 9% cheaper compared to LNG. According to an analysis, Tapi gas at Pakistan border will cost $8.268 per million British thermal units (mmbtu) compared to re-gasified LNG price at Pakistan port of $8.982 per mmbtu based on three-month average Brent crude price. However, the ECC was kept in the dark in that regard, they said.

When contacted, Special Assistant to PM Nadeem Babar said five years ago LNG was more expensive than Tapi gas. Now, he said, the LNG price had come down whereas the Tapi price formula had not been revised and it became more expensive.

“Reopening or renegotiating international contracts or sovereign commitments is not a simple thing. In case of Tapi, there is an option to reopen it once. We have exercised it. In case of Qatar, the price reopening option can be exercised after 10 years, so after 2025,” Babar said.

Petroleum secretary and Petroleum Division spokesperson did not directly respond to requests for comments.

However, according to a news report on Thursday, the Petroleum Division said the Tapi gas pipeline project was progressing as per the timelines agreed among member countries and “there is no delay in the project”. “The planned flow of non-compressed gas from the Tapi pipeline is December 2023,” according to an official document available with APP news agency.

Earlier, a senior official privy to petroleum-sector developments informed APP that Pakistan was in the process of renegotiating gas price with Tapi Project Company Limited (TPCL), following which groundbreaking ceremony would be held for Pakistan section of the multibillion-dollar trans-country pipeline in Chaman.

“We are keen to have a new compatible gas price under the Tapi project. Accordingly, renegotiation will take place with TPCL before groundbreaking of the project in Pakistan.” He was confident that Pakistan would complete phase-I of the project within 30 months after initiating work on laying the pipeline from Chaman to Multan via Quetta and Dera Ismail Khan.

The project comprises two phases. In the first phase, there will be free flow of gas in the pipeline, which will be completed at an estimated cost of $5-6 billion while in the second phase, compressor stations will be set up at a cost of $1.9-2 billion.