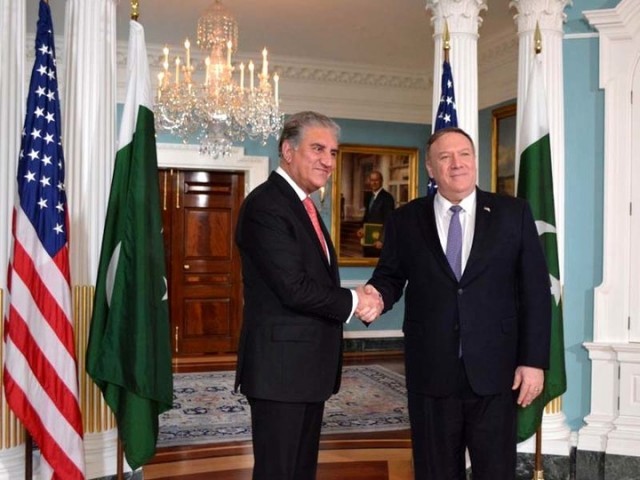 FM Qureshi meets his US counterpart in Washington. PHOTO: PID

US Secretary of State Mike Pompeo on Friday appreciated Pakistan’s support for a political solution to the conflict in neighbouring Afghanistan where US-led coalition forces have been fighting a deadly Taliban insurgency for close to two decades.

Pompeo’s comments which he made in a meeting with Foreign Minister Shah Mehmood Qureshi came as the Afghan Taliban offered to stand down their fighters for 10 days, in an effort to resurrect peace talks with the US that were abruptly scrapped last year by President Donald Trump.

The ceasefire proposal was given to Trump’s top aide Zalmay Khalilzad on Wednesday. According to Britain’s Guardian newspaper, the US, which has been pushing for a ceasefire to pave the way for new talks, is still evaluating the insurgents’ offer. President Trump is eager to pull out more than 12,000 troops remaining in Afghanistan, seeing the war as no longer worth its cost.

VIDEO: US Secretary of State Pompeo welcomes Pakistan's Foreign Minister #Qureshi to the State Department. The men are set to speak about momentum towards a deal between the US and Taliban, as Qureshi warned the US not to allow the neglect of Afghanistan, as seen after 1989 pic.twitter.com/tJYzcvNTdW

Qureshi briefed Pompeo on his meetings earlier this week with various leaders during his recent visits to Iran and Saudi Arabia. He reiterated Pakistan’s commitment to promoting peace in the region,” according to a statement issued by the Foreign Office in Islamabad on Friday night.

“He [Qureshi] briefed Secretary Pompeo on his discussions in Tehran and Riyadh. The foreign minister said that any conflict will destabilise the region as well as the global economy,” the Foreign Office statement read.

Qureshi, who earlier called on the US to remain engaged in Afghanistan’s reconstruction even after withdrawal of its troops, informed the top US diplomat that Pakistan would continue its efforts for a political solution to the Afghan conflict. “Secretary Pompeo appreciated Pakistan’s support for political reconciliation in Afghanistan and its efforts for peace in the neighbourhood,” the statement said.

Qureshi emphasised that resolution of the Kashmir dispute in accordance with the UN resolutions was vital for brining permanent peace and stability to the South Asian region. He also expressed concern that the Indian government’s extremist Hindutva agenda and its belligerence on the Line of Control (LoC) had created a dangerous situation in South Asia, the Foreign Office statement said.

“Peace in South Asia would remain elusive until India agrees to the resolution of the core dispute of Jammu and Kashmir, according to United Nations resolutions and the wishes of the Kashmiri people,” Qureshi said.

He also underlined the need for strengthening bilateral trade and investment. “A more robust trade and investment relationship is key to achieving President Donald Trump and Prime Minister Imran Khan’s shared vision for a long-term and enduring partnership,” the statement quoted Qureshi as saying.

Later, Qureshi met US National Security Adviser Robert O’Brian and briefed him on his meetings with the leadership of Iran and Saudi Arabia during his visit to Tehran and Riyadh. He stressed that the Pakistan sought peaceful resolution of the conflicts through dialogue.

He also briefed O’Brian on the situation in Occupied Kashmir, where the people remained under a lockdown for over five months. He urged the US to take notice of this human tragedy and play its role in granting the Kashmiris their legitimate right to self-determination.

During the meeting, both sides noted the positive developments in the US-Taliban talks. Qureshi reiterated that Pakistan would continue its efforts for reconciliation Afghanistan. O’Brian appreciated Pakistan’s support for US efforts for Afghan peace.

Qureshi is visiting the US for talks with Secretary Pompeo, Ambassador O’Brian and the ranking US lawmakers on Pakistan’s efforts for defusing tensions in the Middle East and the growing momentum toward a deal between the United States and the Taliban.

On Thursday night, the foreign minister, while speaking at the Center for Strategic and International Studies, said that the United States must remain engaged in Afghanistan’s reconstruction even if it succeeds in withdrawing troops and ending its longest war.

He warned the US not to return to the neglect of Afghanistan, as was seen after 1989 when Soviet troops pulled out under pressure from “mujahideen” backed by Washington and Islamabad. “Do not repeat the ’80s,” Qureshi said. “Even if there is a successful agreement, challenges will remain there, so the United States and its friends and coalition partners will have to have a more responsible withdrawal,” he told the audience.

Qureshi also used the event to draw attention to the plight of the Kashmiri people, who have been under severe restrictions for the past several months. He said India had been seeking to break the will of Kashmiris by imprisoning them in their homes and imposing a communications blockade.

“Thousands of Kashmiris, particularly young boys, have been imprisoned, tortured. Even children as young as nine have not been spared,” he said, warning that if the Kashmir issue was not addressed, the crisis could become a flashpoint between the two countries with strategic capabilities.

He said the Indian narrative that Kashmir was an internal part of India had been firmly refuted by the fact that the issue remained on the UN Security Council agenda. He also rejected India’s argument that the Kashmir clampdown was aimed at economic development of the Kashmiri people.

Earlier, Qureshi met ranking US lawmakers, including the chairman and members of Senate Foreign Relations Committee and the Pakistan Caucus in the US House of Representatives. He also discussed defence cooperation between Islamabad and Washington in a meeting with Under Secretary of Defence for Policy John Rood.

During the meeting, he welcomed the revival of International Military Education and Training Programme (IMET), which was approved by the US Congress earlier this month. Pakistan looked forward to enhancing military cooperation, Qureshi said.

The foreign minister also met Senator Lindsay Graham. He said that the discussion focused on the need to expand cooperation in trade, agriculture and investment to realise the vision for enhanced economic engagement between the long-term allies.

With input from Agencies