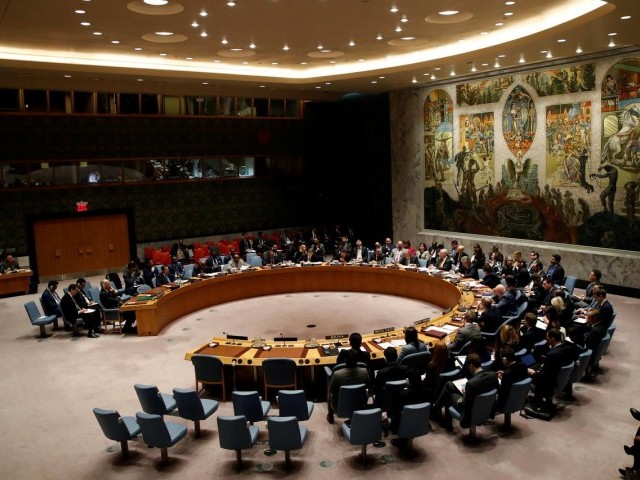 A Reuters file photo of a UNSC meeting.

China has said that “most members” of the UN Security Council (UNSC) have voiced concerns at the situation in Indian Occupied Jammu and Kashmir (IOJ&K), which remains under siege since the illegal revocation of its semi-autonomous constitutional status by the Hindu nationalist government of Prime Minister Narendra Modi in August last year.

A closed-door meeting of the 15-member powerful council on Wednesday took up for discussion for a second time since August 5 the situation in IOJ&K at the request of China – much to the chagrin of India. Pakistan has welcomed the move which, it says, shows the chronic dispute remains on the global body’s agenda.

“China’s position [on Kashmir dispute] is consistent and clear. This issue is a dispute left from history and should be properly resolved following the UN Charter, UNSC resolutions, and bilateral treaties and in a peaceful way,” Chinese Foreign Ministry spokesman Geng Shuang said at a media briefing in Beijing.

Almost all major news outlets of India covered the media was arranged for Indian media where aggressive media persons unleashed a barrage of questions about China’s official position on IOJ&K.

“As requested by Pakistan, the Security Council reviewed the Kashmir issue on January 15. The Security Council members are concerned about the current situation and they called the relevant parties to observe the charter and resolve disputes peacefully, through political dialogue and exercise restraint and work on de-escalation,” The Press Trust of India quoted Geng as saying.

Though the council did not officially reveal what transpired in the closed-door meeting on IOJ&K, China shared details of the review with the media. The Indian media persons questioned that saying no other member of the council has said anything about the meeting.
“Indeed the UNSC reviewed the Kashmir issue on January 15 and there was no statement. But China as a permanent member participated in the review meeting and what I said was in line with the review. But if you think this is not true, then you can look at other sources,” the spokesperson said.

In New Delhi, Ministry of External Affairs Spokesperson Raveesh Kumar claimed at a news briefing that the overwhelming majority of the UNSC was of view that it was not the right forum for such issues.
Asked about Kumar’s claim, Geng said: “India’s attitude and views, we understand them. But what I said was China’s views and stance. I believe that India is aware of that and we have been in contact on that.”

To a question on why China is raising the Kashmir issue at the UNSC, when the top leaders of India and China made efforts to improve relations through informal summits, the Chinese foreign ministry spokesperson said, “Because we want to work for de-escalation and work for regional peace and stability. This is out of goodwill. However, if the Indian side interprets it in other way, that will be a wrong interpretation.”

Prime Minister Imran Khan, in an interview with Germany’s public broadcaster, regretted on Thursday that the international community was paying little attention to the Kashmir conflict.

“The silence of world on Kashmir is due to commercial interests because India is a big market,” he told DW TV. In the strategic Western mind, India is supposed to be a counterbalance to China. “Therefore, you see a completely different approach…,” he added.

Responding to a question that the Russian envoy in India has said that the Kashmir issue should be resolved bilaterally between India and Pakistan, he said during the review most UNSC members expressed concern on the current situation in Kashmir and called for restraint and de-escalation of tensions through dialogue. “Russia is a member of the UNSC and its position has been fully expressed during the review,” he said.

Asked about presumed change in China’s position vis-à-vis Kashmir, Geng said Beijing’s position on Kashmir is very clear. “We haven’t changed our position. The issue between India and Pakistan has always been on the UNSC agenda.

The UNSC should pay attention to the issue in Kashmir based on the latest developments. And in this region, there are still International Observer Groups and it has always been on UNSC agenda,” he said.

About India’s decision to invite Pakistan’s prime minister in a meeting of the heads of the governments of the Shanghai Cooperation Organisation (SCO) countries, Geng said, “The SCO is a regional cooperation organisation.

India and Pakistan are members of it. Both the countries, we hope, can work together closely under this framework for the healthy development of this organisation.”

“India and Pakistan are important countries in South Asia and I hope they can resolve their issues through dialogue and improve their relations,” he added.

Geng reiterated that Beijing stood for enhancing dialogue and mutual trust between India and Pakistan and exercise restraint and work for de-escalation of tensions. “As a responsible country, we have been in contact with both India and Pakistan, and are playing a constructive role on this,” he said.