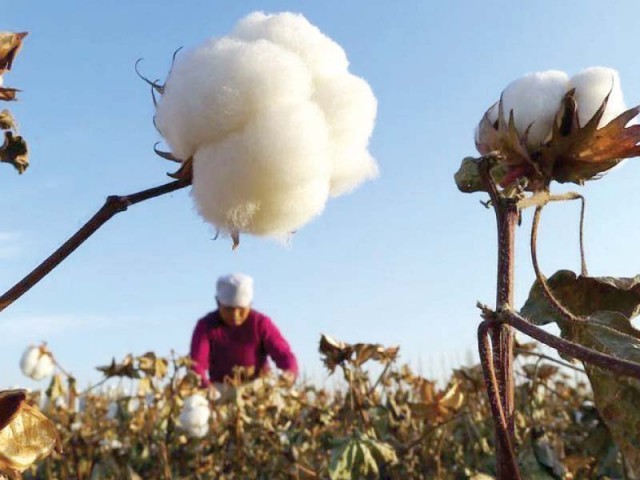 The FBR argued that the cost of exemption from regulatory duty, additional customs duty and sales tax for the period of Jan-Jul 2020 would be around Rs4 billion. PHOTO: FILE

ISLAMABAD: The government has refused to back down despite opposition from the Ministry of National Food Security and the Federal Board of Revenue (FBR) to the plan of withdrawing all duties on cotton import, which will facilitate textile barons at the expense of farmers.

Many cotton farmers have already switched to the sugarcane crop due to alleged exploitation by textile millers but now they are being exploited by sugar millers.

Fiscal year 2018-19 had been a worst year for the cotton crop when the harvest dropped to very low levels due to the poor attention paid by the government.

According to experts, many previous governments had neglected the agriculture sector, where the growth fell during tenure of the previous government, and now the textile millers are influencing policymaking by the present government with implications for the farmers.

In Pakistan, transporters’ strike causes loss of billions of rupees

Agriculture has become an industry but farmers are still being exploited. No valuable research has been conducted and the farmers are not being trained in value addition.

The Ministry of National Food Security, in a recent meeting of the Economic Coordination Committee (ECC) of the cabinet, said cotton was still lying with ginners and the farmers, and duty-free import of the commodity would hurt growers as it would deprive them of a fair price for their produce.

The ministry pointed out that all textile manufacturers were not going for exports and many of them were producing textile products to meet domestic demand.

It was pointed out that in order to facilitate the export-focused textile manufacturers, a scheme titled Duty and Tax Remission for Exports (DTRE) was in place to restrict the import of cotton to value addition.

Therefore, the Ministry of National Food Security did not support the proposed withdrawal of regulatory duty, additional customs duty and sales tax on the import of cotton.

On the other hand, the FBR argued that the cost of exemption from regulatory duty, additional customs duty and sales tax for the period of Jan-Jul 2020 would be around Rs4 billion based on average revenue collection in the past three years.

Therefore, it said, the revenue impact and the cost of exemption may be considered while deliberating on the proposal.

The ECC was of the view that the impact of withdrawal of duties on cotton import would be quite positive on the export of textile products, which would generate precious foreign exchange earnings. It removed the duties with effect from January 15, 2020.

The ECC also noted that cotton was a cash crop and the backbone of Pakistan’s economy, however, its production had been continuously on the wane for the past many years. It underlined the need for evolving a comprehensive policy to enhance the production of cotton.

The Ministry of Commerce informed the ECC that the textile sector of Pakistan consumed around 12 to 17 million bales of cotton per annum.

Later, the 1% duty was increased to 2% and then 3% along with 2% additional duty to make it 5%. At present, cotton import attracts 3% regulatory duty, 2% additional customs duty and 5% sales tax.

Under the prime minister’s incentive package for the exporters, announced on January 10, 2017, the textile sector was massively facilitated through the withdrawal of customs duty and sales tax on imported cotton with effect from January 16, 2017. However, the duties were re-imposed in July-August.

This year, the cotton production target is 15.001 million bales but latest data suggests the harvest will not be more than 10.20 million bales.