Awaits fulfil­ment of promis­es made by PM before electi­ons
By Shahram Haq
Published: December 31, 2019
Tweet Email

LAHORE: The textile industry of Pakistan had high hopes for the announcement of a handful of beneficial and favourable policies by the government of Prime Minister Imran Khan, which has now been in power for nearly one and a half year.

Earlier in the final years of previous Pakistan Muslim League-Nawaz (PML-N) government, Imran Khan – then an opposition leader – had expressed solidarity with the textile sector, apparently a political step to win over voters in the upcoming general elections in mid-2018. He assured them of formulating sector-specific growth policies if the Pakistan Tehreek-e-Insaf (PTI) came to power.

As soon as he was elected in July 2018, textile and other sectors of the economy turned highly optimistic. Now, the optimism has started to die down as real action to facilitate industries is yet to be taken.

However, calendar year 2019 has brought some relief to the textile industry as it has managed to perform better than other sectors and has made exports of around $12.45 billion in 11 months (Jan-Nov).

First five months of current fiscal year 2019-20 were more encouraging as textile shipments to overseas markets grew 4.68% to $5.76 billion compared to the same period of the preceding year. Textile and clothing exports in 11 months of 2019 rose a negligible 1% year-on-year.

On the other hand, investment in the textile sector for replacing and installing new imported machinery increased 17% to $480 million in the period under review against $453 million in the same period of 2018.

Although the industry was promised energy supplies at subsidised tariffs as part of the government’s incentive package, the decision, approved by the Economic Coordination Committee, could not be implemented in true letter and spirit. Some industrialists insist they are going to get energy subsidy through court orders as they are not receiving utility bills at the reduced tariffs notified by the government.

Meanwhile, news reports have emerged that talk about withdrawal of the energy subsidy granted to the textile sector. The industry has also lost its zero-rated status, along with four other major export sectors, in the 2019-20 budget and is required to pay sales tax from the current fiscal year. 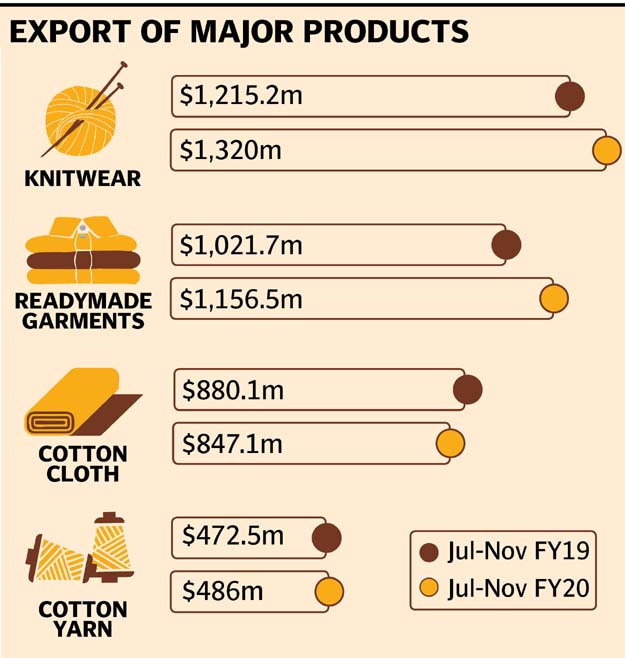 Despite expressing reservations about the government policies, many industry players still believe that the political leadership is doing its homework to help enhance the share of textiles in the country’s global exports.

Alarmingly, cotton arrivals as of December 15, 2019 dropped to 7.86 million bales against 9.96 million bales at the same time last year. The drop in production of cotton – a key raw material for textile mills – is likely to cause its shortage and force the textile sector to increase cotton imports.

The industry needs at least 15 million cotton bales in a year to meet its processing requirements.

According to statistics provided by the All Pakistan Textile Mills Association (Aptma), the industry is eyeing an export target of $13.3 billion for FY20 with projected investment of $1 billion. The readymade garment sub-sector is again expected to take the lead in overseas shipments.

For the first time in 2019, Pakistan hosted the 35th World Fashion Convention, organised annually by the International Apparel Federation, a European lobby of fashion brands. The event, attended by executives of many global brands and associations, has somewhat changed Pakistan’s perception abroad and exporters are gearing up to cash in on the advantage.

Some exporters claim that initially they were unable to reap benefits of rupee depreciation, citing that international buyers were smart enough who were keeping a close watch on the exporting country’s exchange rates and revised prices according to fluctuations in the currency value.

Similarly, exports of readymade garments rose to 26.2 million dozen units in July-November FY20 against 19.26 million dozen units in the corresponding period of fiscal year 2018-19. Industrialists term the increase in export volumes a smart move as it can enhance the share of Pakistan’s textile sector in global markets and its benefits will eventually reach the country in terms of dollar earnings.

Still, the scarcity of raw material is one of the biggest concerns for different textile sub-sectors because their targets are directly linked to the country’s cotton production.

Earlier in 2020, the GSP Plus preferential trade status, granted to Pakistan by the European Union, will be reviewed – another area of worry for the stakeholders as they direly need an extension of the facility to boost exports.

Internal and external challenges are likely to haunt the government as well as the industry, which are keen to meet the targets. Some of the internal challenges include energy affordability, inconsistent policies in the short term, infrastructure hurdles, skill development constraints, foreign exchange volatility and above all, the macroeconomic volatility.

On the external front, improvement in the country’s image internationally is the biggest challenge as a damaged perception turns away global buying houses and brands. Getting greater market access to the Asean region, the US, Japan and Australia is also a potential challenge for the textile industry.

Efforts of the industry to step up Pakistan’s textile and clothing share in global markets from the existing 1.6% to 3% over the next five years largely depend on facilitation from the government.

The textile sector claims that things are moving in the right direction, although promises made by the premier before general elections have not yet been honoured to the satisfaction of the industry.