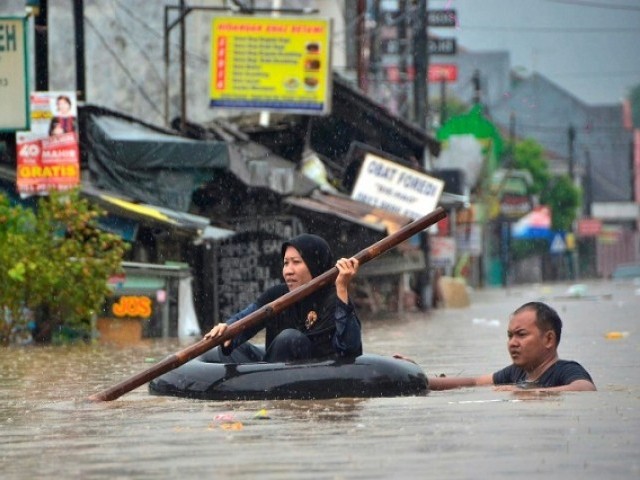 A woman paddles through flood waters on an inner tube in Bekasi, near Jakarta. PHOTO: AFP

More than 200 Jakarta residents have filed a lawsuit against the governor of Indonesia’s capital as they seek to hold authorities responsible over their inaction during some of the deadliest flooding in years, a lawyer for the plaintiffs said.

At least 60 people were killed and nearly 175,000 were displaced after some of the heaviest rain since records began caused flash floods and landslides in Jakarta and nearby towns on Dec. 31 and New Year’s Day.

The lawsuit, which was filed at a Jakarta district court on Monday by 243 residents against Governor Anies Baswedan, said authorities had failed to take sufficient action and sought 42.3 billion rupiah ($3.1 million) in compensation.

“People have been affected tremendously. They deserve compensation and assurance from the government that their concerns are being addressed,” said Alvon Kurnia Palma at the Indonesia Legal Aid Foundation, who is representing plaintiffs.

“This is not the first time we are filing a lawsuit against the government for floods, but this time we have clear evidence linking the government’s negligence to the damage caused. People are angry that nothing has been done,” he said.

A spokesman for Governor Baswedan did not respond to requests for comment on Tuesday.

With one of the world’s longest coastlines, Indonesia is extremely vulnerable to climate-change impacts.

Rising sea levels and the inability of existing infrastructure to cope with excess water during the monsoon season have resulted in regular flooding in Jakarta, which is home to more than 10 million people.

Despite previous flooding disasters in Jakarta and ample data pointing to excessive rainfall, authorities failed to warn residents and were slow in responding to the recent crisis, Palma told the Thomson Reuters Foundation.

Part of the central government’s solution for Jakarta’s floods is to move the capital to the island of Borneo by 2023.

Plans to improve Jakarta’s flood defences include building two dams and works on the city’s biggest river. President Joko Widodo has blamed the flooding on delays to these projects.

It is not just the floods that Jakarta residents are unhappy about: last year, a group of residents filed a lawsuit against authorities for failing to curb worsening air pollution.

The lawsuits are a sign of the growing frustration of residents with the government’s inaction, said Shobhakar Dhakal, a professor in the department of energy, environment and climate change at the Asian Institute of Technology in Bangkok.

“It is a way for people to put pressure on governments to act, and to raise awareness around the issues,” he said.