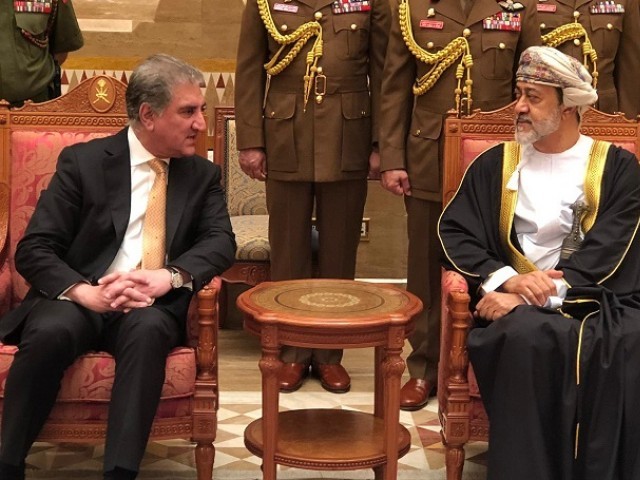 “The Government of Pakistan and its people are heartbroken over the passing of Sultan Qaboos,” FM Qureshi said while expressing grief to the new ruler of Oman, Haitham bin Tariq.

The foreign minister said that the departed sultan was known as a benevolent, orderly and peaceful ruler. He also prayed for his forgiveness.

“During his reign, Oman made ideal development,” FM said and added that the country lost a sincere leader and Pakistan lost a trusted friend.

Sultan Haitham thanked FM Qureshi for his visit and pledged that Oman’s government will strive to promote peace and security in the region based on the golden principles laid down by his predecessor.

FM Qureshi was received by Pakistan Ambassador to Muscat Ahsan Wagan and other officials of Omani Foreign Ministry at the Airport.

The sultanate of Oman, positioned geographically and diplomatically between the rival powers of Iran and Saudi Arabia, earned outsize influence under the long reign of the late Sultan Qaboos.

As the health of the royal ruler declined, and speculation turned to who would succeed him in the absence of an heir, there were questions over the future of Oman and its role as a valued mediator in a troubled region.

However, with the passing on Friday of the 79-year-old sultan and the swift appointment of like-minded cousin Haitham bin Tariq as his successor, observers say Oman appears on track to retain its treasured status as a neutral peacemaker.

To do so though, the new sultan will need to navigate tricky geopolitical terrain as well as address economic challenges facing his own country.

During his half-century reign, Sultan Qaboos thoroughly modernised his country but also forged a broader role as a go-between in regional and international crises.

In the high-stakes Iran nuclear crisis, Oman played a discreet role in the dialogue between Tehran and Washington, leading to the 2015 deal involving Western powers, which three years later was unilaterally abandoned by US President Donald Trump.

The foreign minister later briefed the media about his meeting with Oman’s new Sultan before leaving for Pakistan at the Muscat airport.