Dates to be decide­d
By Reuters
Published: January 14, 2020
Tweet Email 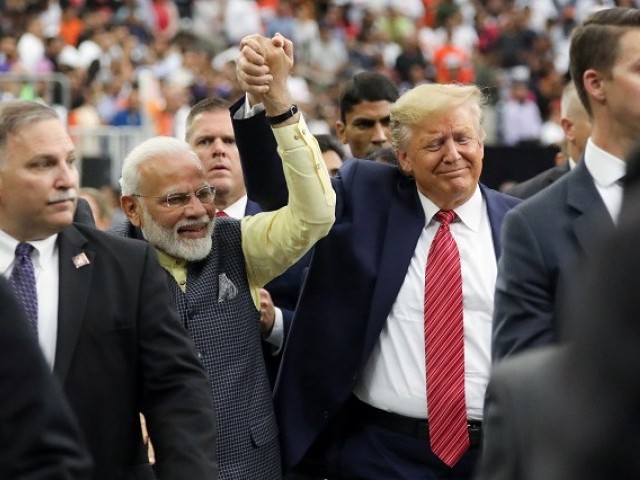 US President Donald Trump is planning his first visit to India next month, Bloomberg reported on Tuesday, citing a senior Indian government official.

The United States and India are in touch to work out mutually convenient dates for the visit, according to Bloomberg.

Late last year, Trump joined Prime Minister Narendra Modi at a massive gathering of Indian-Americans in Houston, in a symbolic show of the bond between the two leaders and countries.

The September 22 rally – dubbed, with a touch of Texan twang, “Howdy, Modi!” – marked a rare joint appearance between a US president and a foreign leader before an ethnic community, and was the pair’s third meeting last year.

Trump urges India, Pakistan to ‘work it out’

After the rally, Trump said he did not expect ‘aggressive’ statements from the Indian premier.

“I heard [a] very aggressive statement yesterday and I have to say I mean I was there [and] I didn’t know I was going to hear that statement… from India… from Modi,” said Trump while speaking to the media alongside Prime Minster Imran Khan.

Trump also seemed surprised that Modi’s statement was “very well received” within the room of some “59,000” people.

“But it was a very aggressive statement and I hope they’re [India and Pakistan] going to be able to come together and do something that’s smart and good for both.”