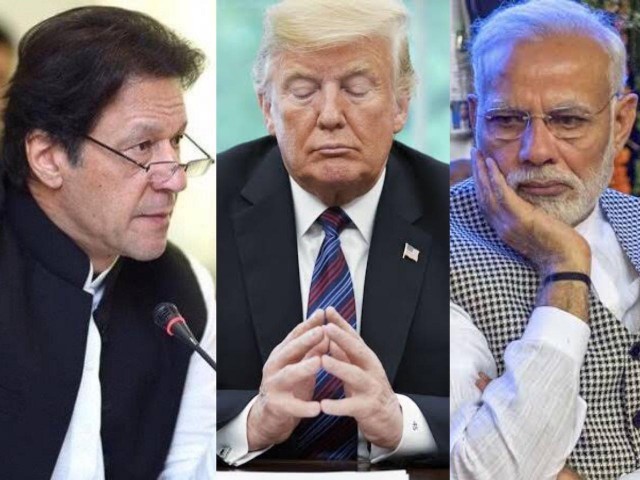 NEW YORK: US President Donald Trump said on Wednesday he encouraged India and Pakistan to work out their differences in separate meetings with their prime ministers this week.

“I said, ‘Fellas, work it out. Just work it out,'” Trump told a news conference after attending the UN General Assembly.

“Those are two nuclear countries. They’ve gotta work it out,” he said.

Tensions have soared this year between India and Pakistan, which have fought three full-fledged wars, two over the disputed Himalayan territory of Kashmir.

Prime Minister Imran Khan has urged the United States to take up Kashmir, but India has long refused outside mediation.

Trump showed his support on Sunday for Modi by attending a rally with him before Indian-Americans in Houston, where the Hindu nationalist leader accused Pakistan of fomenting extremism.

On Monday, he reiterated his offer for mediation between Pakistan and India but emphasised that arbitration could not be carried out unless both the parties involved welcome it.

Addressing the media alongside PM Imran before their one-on-one meeting on the sidelines of the United Nations General Assembly session in New York, the US president acknowledged that the Kashmir was a complex issue that had been going on for a long time.

He said that he had never failed as an arbitrator in the past and would be available to help if asked.

“If I can help, I will certainly do that,” he said. “If both (Pakistan and India) want, I am ready, willing and able to do it,” he said. “I think it’s important that both sides want Washington to mediate on the Kashmir issue.”

When asked if he was concerned about human rights violations in occupied Kashmir, he said, “Yes…I am, I want both sides to come to the negotiating table… I’d like to see everything work out. I want everybody to be treated well. There is always a solution and I do believe that there is a solution.”

Trump said he has a “very good relationship” with Indian Prime Minister Narendra Modi as well as with Prime Minister Imran Khan and hoped the two neighbours would come together and resolve their differences over Kashmir.

Without specifying, he added he had heard a “very aggressive” statement from Modi on Sunday, but “I hope they (Pakistan and India) are going to be able to come together and do something that’s really smart and good for both”.

No UN breakthrough: Iran rules out talks as US intensifies sanctions