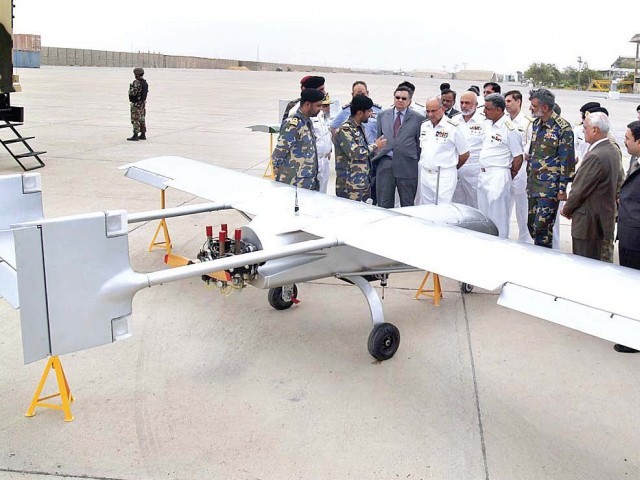 A day after a ‘collision with a bird’ crashed a Pakistan Navy unmanned aerial vehicle (UAV), the navy inducted the reconnaissance drones in its fleet.

The formal induction of the Uqab series drones was announced on Wednesday at the PNS Mehran base here, marking the “first squadron of UAVs” in the armed force.

On Tuesday, a drone from the Uqab series had crashed when it “hit an eagle” during mid flight between 9:30 and 10 am. The UAV crashed at the National Oil Refinery in Korangi after it flew from the PNS Mehran base.

According to sources within the navy, the Uqab has been developed and modified for the force by the National Engineering and Scientific Commission (Nescom) consortium under the Strategic Plans Division.  The Pakistan Army also maintains its own fleet of about 20 and 30 Uqabs.

Although the induction was announced on Wednesday, the Uqab has been used by the navy for some time. Apart from being flown from PNS Mehran, it was tested and flown along the coast of Gwadar for several months in the past.

Drone experts say that Uqab is a replica of Islamabad-based local drone manufacturing companies East West Infiniti and SATUMA’s joint product called the “Jasoos”. Many of the technicians who were previously working for these companies left to work for Nescom and eventually made Uqab.

The Uqab II drone inducted into the navy is said to have a wing span of 18 feet, weighs more than 200 kilograms and can reach altitudes of up to 10,000 feet.

This mid range tactical UAV designed for reconnaissance missions is fitted with sensors; day/night video and still camera; semi-autonomous flight modules and has estimated endurance of more than three hours.  Its range is estimated at 150 nautical miles.

Uqabs require a runway strip for take-off and landings like normal aircraft. A proper command and control mechanism installed in a truck that records the feedback sent by the drone comes along the Uqab system. Observers compare this locally manufactured UAV with the US-based AAI Corporation’s Shadow 200 and 400 series of drones, which at one point were being offered by the US to Pakistan.

Apart from the Uqab, the Pakistan Navy has in its stock other small drones, including the British Meggitt Defence Systems’ Banshee that is typically used for target practice by missiles on ships. Also, a pilotless helicopter drone Camcopter S-100 made by the Austrian company Schibel has been tested on the frigates of the navy in the past.

Javed Iqbal, a retired navy vice admiral, said that although the Uqab II is nowhere close in terms of capability of the P3C Orion aircraft that were destroyed in the terrorist attack on May 22 at the PNS Mehran Base, Uqabs would be a useful tool for short range missions.

According to the handout issued by the navy, Uqab is an indigenously developed aircraft equipped with state of the art sensors employed in support of Maritime Interdiction Operation in the coastal areas.

At the ceremony, Navel chief Noman Bashir said the induction of the UAV is a manifestation of the Pakistan Navy’s commitment and resolve towards self reliance.