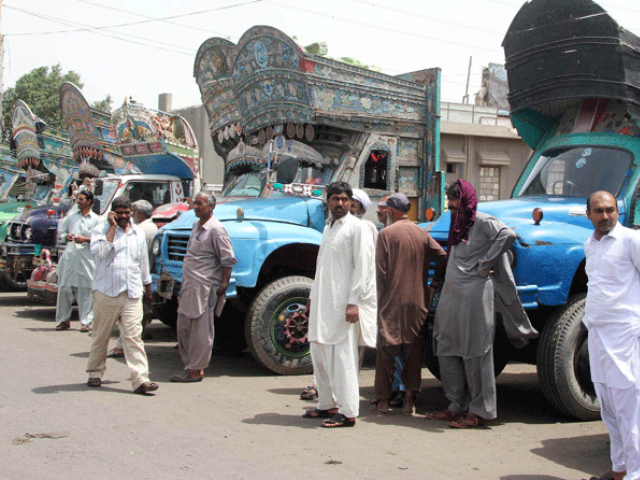 KARACHI: The Pakistan Tehreek-e-Insaf (PTI) government’s goal of giving a boost to exports is in jeopardy as cargo transportation from factories to ports has come to a halt due to a countrywide strike by goods transporters.

In a statement issued on Wednesday, Pakistan Hosiery Manufacturers and Exporters Association (PHMA) Chairman Jawed Bilwani lamented that the strike was resulting in scarcity of transport vehicles and containers for the export-oriented industry, which was subsequently affecting shipments all over the country.

“The government seems to be nowhere and we, the exporters, suffer the most whenever the transporters go on strike,” he remarked and urged the government to take immediate notice and end the goods transporters’ strike.

He voiced fear that if the strike was not called off, exports worth Rs10 billion could be affected on a daily basis, which would deal a major blow to the government’s goal of enhancing exports to narrow the trade gap.

According to the latest statistics of the Pakistan Bureau of Statistics (PBS), Pakistan imported goods worth $23 billion in July-December 2019 while it exported only $11.5 billion worth of goods during the period, a deficit of $11.6 billion.

“Goods of export-oriented industries are ready to be shipped but we find no containers and transport vehicles to move them to ports,” Bilwani said while expressing concern.

“If export shipments are not dispatched timely, exporters will have to resort to air shipments, which cost a great deal more and caused financial loss.”

The authorities were also making changes in the axle load conditions from time to time, which should be settled once and for all, he stressed.

“By imposing heavy fines, the authorities are not saving the roads,” he said. “The government should define standards for the axle load and stick to these.”

Businessmen could not make an investment on a daily basis according to different standards of the government, he remarked.

According to the State Bank of Pakistan’s report “State of Pakistan’s Economy – First Quarterly Report for the year 2019-2020”, the government has postponed regular action against axle load to ease the operational constraints faced by the manufacturers.