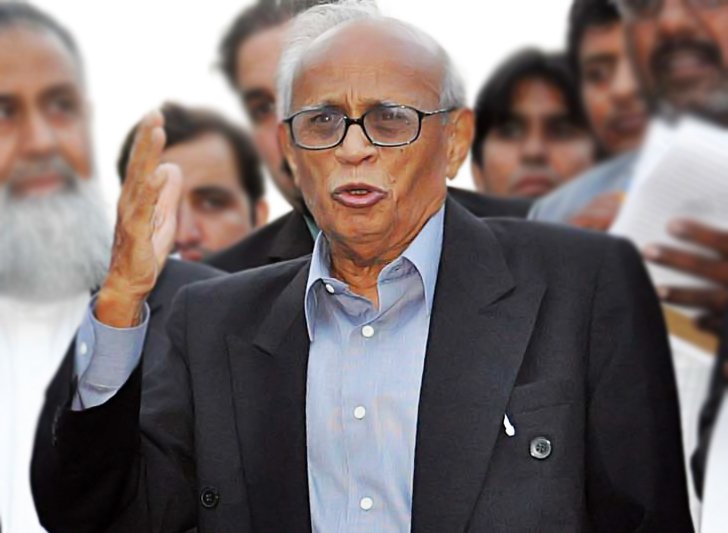 KARACHI: Former chief election commissioner Justice (retd) Fakhruddin G Ebrahim passed away on Tuesday in Karachi after a prolonged illness. He was 91.

The funeral prayers for Fakhruddin G Ebrahim, who was also ombudsperson for The Express Tribune, were offered at 7pm. He will be laid to rest at Mewa Shah graveyard in the metropolis.

The pristine career of Ebrahim as a judge of the superior judiciary, a lawyer and a statesman appeared to be enough for the PPP decision to accept his nomination for chief election commissioner before the 2013 general elections despite him being an opposition candidate.

Born on February 12, 1928, in the Indian state of Gujarat, Ebrahim earned a name for himself when he refused to accept a Provisional Constitutional Order (PCO) issued by the then military dictator Gen Ziaul Haq in the early ‘80s and resigned as a judge.

However, it wouldn’t be the last time the jurist would resign in protest. In fact, it became somewhat of a hallmark for Ebrahim to leave distinguished posts as he refused to compromise on his principles, including the governorship of Sindh.

He served as the Attorney General of Pakistan during the government of former prime minister Zulfikar Ali Bhutto and served as his close legal adviser throughout the 1970s.

In 1961, Ebrahim established his own firm while he continued to lecture at the Sindh Law College. In 1971, Zulfikar Ali Bhutto appointed him Attorney General of Pakistan.

In March 1981, serving as an ad hoc judge of the Supreme Court of Pakistan, he refused to take a fresh oath under the PCO promulgated by General Ziaul-Haq along with Justice Dorab Patel and Chief Justice Sheikh Anwarul Haq.

The PCO not only negated the independence of the judiciary but also prolonged martial law by nullifying the effect of a judgment giving General Zia’s regime limited recognition.

The establishment of the Citizens Police Liaison Committee (CPLC) in 1989 is another one of his most celebrated achievements.

Prime Minister Imran Khan expressed deep grief over the sad demise. He said Fakhruddin G Ebrahim’s precious services in the field of law and justice will always be remembered. He also prayed for the departed soul and the bereaved family.

“May Allah bless the departed soul and give strength to the bereaved family, Aamen”, ISPR quoted General Bajwa as saying.

Chief Justice of Pakistan Justice Gulzar Ahmed and other judges of the apex court have also expressed deep sorrow and grief over the sad demise of their former colleague.

They have extended their heartfelt condolences and sincere sympathies to members of the bereaved family.