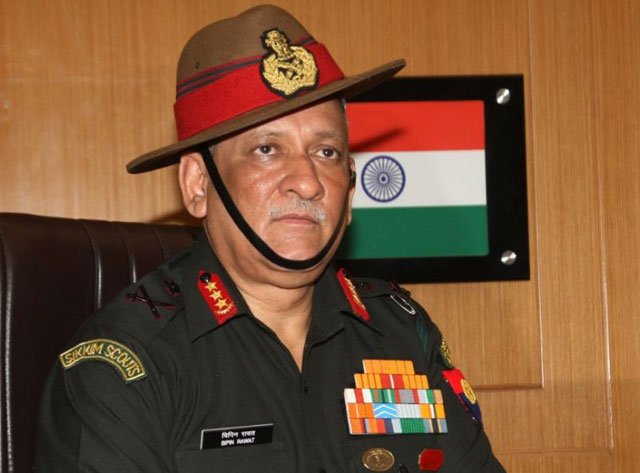 Speaking at a healthcare leadership summit in New Delhi on December 26, former Indian army chief Bipin Rawat made a political statement when he said: “Leaders are not those who lead people in inappropriate directions, as we are witnessing in a large number of university and college students. This is not leadership. A leader leads you in the correct direction, gives you the right advice and then ensures that he cares for the people he heads. So leadership is by personal examination and that is what we in the armed forces are proud of.” General Rawat retired as army chief on December 31 last year, has been tipped as India’s first-ever Chief of Defense Staff (CDS) and is considered quite close to the BJP regime of Prime Minister Narendra Modi.

It was because of General Rawat’s unequivocal support to PM Modi on dealing with the post-August 5 situation in Indian-Occupied Kashmir (IOK) and his criticism of the protests in different Indian cities against the Citizenship Amendment Act (CAA) that the BJP regime wants to retain him in the military’s top hierarchy. General Rawat was criticised in India for politicising the CAA. Former navy chief retired Admiral L Ramdas, stated that his remarks were “clearly wrong and armed forces personnel must follow decades-old principles of serving the country and not any political force.”

Former Indian PM Manmohan Singh in an interview given to The Hindustan Times blamed the BJP-led Indian government of compromising on India’s National Security. Referring to the Pulwama attack, he stated, “Forty of our brave CRPF soldiers were martyred in the Pulwama terror attack at the most secure National Highway in the country. This is a grave intelligence and national security failure. Since then, it has come out that CRPF and BSF were requesting for airlifting the soldiers but the Modi government refused it.” He accused the Modi regime of attempting to shamelessly politicise the armed forces. Singh said, “All this is being done to draw the attention away from unpardonable failures of Modi government on the economic front, on jobs, on rural distress.”

Voices of concern are being raised in India today about the assertion of the Indian army and its political ambitions. Taking advantage of Modi’s reliance on the army to quell popular discontent in the Muslim dominated IOK and in other troubled parts of the country rocked by protests against the CAA, Indian army generals consider it an appropriate time to deepen their interference in political matters. The perception about the non-political and neutral position of the Indian military on political issues is however changing with the passage of time. General Rawat’s comments about students being involved in large-scale protests against the CAA is just the tip of the iceberg. The more India will be polarised in the wake of Hindu fanaticism and BJP’s sustained anti-Muslim policies, the more the Indian army will be politicised.

Constitutionally, the Indian Armed Forces are subservient to the government but in reality, in the last several years, one can notice their assertion in areas considered to be purely of civilian domain. Three major facts can determine the changing shape of the Indian army and how the BJP government is pampering generals in order to get their support in crushing popular assertion in IOK and in the northeastern states. First, in 1989, when then PM, Rajiv Gandhi, had almost reached an agreement with Pakistan over the Siachen dispute, the Indian army refused to render its support considering the change in India’s territorial position a threat to the country’s security.

In 1984, taking advantage of the normal retreat of Pakistani forces from their positions in Siachen because of winter, India occupied a part of the glacier under Pakistani control. Since then, Siachen is the world’s highest altitude conflict zone. Pakistan suggested numerous proposals to resolve the conflict like declaring the glacier as a demilitarised zone and a peace park which can benefit both countries with tourism. But, the Indian army vetoed any Pakistani move for demilitarisation or restoration of the pre-1984 position. When Manmohan Singh was India’s PM and wanted to resolve the issue in 2005-6, General JJ Singh, then COAS opposed his moves. On November 12, 2006, on the eve of a meeting between the foreign secretaries of India and Pakistan, the Indian army held a press conference at Siachen glacier and, in front of domestic and international reporters, declared its opposition to “demilitarising Siachen”. The Indian army’s clear stance was supported by Manmohan Singh as it didn’t relinquish its control of the territory it occupied in 1984.

Second, the Bharatiya Janata Party (BJP) and its Hindu nationalist allies in the last six years have managed to penetrate their ideologically prone individuals in the rank and file of the bureaucracy, judiciary, police and military. As a result all four institutions have lost their neutrality. When the Indian army supports controversial decisions of the government, it means its generals are looking for perks and quick promotions. Otherwise, General Rawat, who has openly supported the BJP, wouldn’t have been rewarded with the CDS appointment. The brainwashing and indoctrination of the Indian military by the ideologues of Hindu nationalism is now rendering results in the form of its tilt towards BJP’s controversial policies of the BJP government. It means India is fast drifting in the direction of an authoritarian political culture where the so-called civilian government of BJP will be a junior partner of the military.

Indian politicians used to blame Pakistan for its military’s dominance in governance but what is happening in India today reflects uneven civil-military relations. Based on the ground realities in the Indian political scene in prevailing circumstances, the possibility of the military’s assertion in governance and political matters cannot be ruled out. Third, the more the Indian army and Border Security Force (BSF) are sucked in local issues the more these will be politicised. The concept of a “new Indian army”, which was articulated a decade ago, is now being viewed in the perspective of a force which has a political agenda and vested interest in taking advantage of critical national issues like the CAA and turmoil in IOK.

The year 2019 has proved to be retrogressive for India because the Modi regime has not only tarnished India’s democratic and secular image but also dragged the military in to serve its interests. When the military will taste power because of its involvement in governance and politics, one can expect it to play a dominant role in statecraft. Given its size and decentralised structure, it may not be possible for the Indian military to seize power but when the level of political polarisation and violence reach an alarming stage, one can expect the “khaki” to step in and take control. Then, India’s very survival as a democratic and federal state will be at stake. The most dangerous possibility is if the Indian military indoctrinated with the Hindutva ideology relinquishes its status as a national army and transforms as a Hindu military force following the footsteps of Nazism and fascism.

The false promise of growth-led development