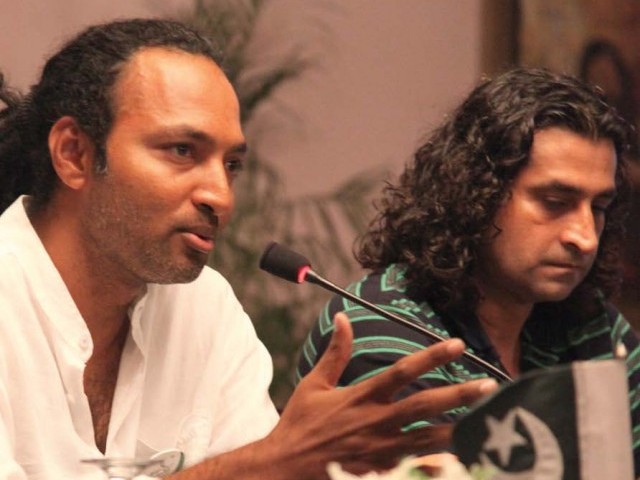 Fuzon band members, Emu, Shallum Xavier and Rameez Mukhtar, donated their song, ‘Junoon’ to the Azme Alishan campaign on Monday at the Pearl Continental Hotel. The band performed the song for the audience and also showcased the video. PHOTO: NEFER SEHGAL/EXPRESS

After a wait of almost two years, the band Fuzon has finally made a comeback. On Monday, the official music video of their new patriotic song, “Hay Junoon” was launched at a press conference at the Pearl Contienental hotel in Karachi.

The press conference was held under the banner of “Azme Alishan” a social awareness campaign and national song competition organised by private entertainment television channel TV One.

The event started with a video presentation on the project showing different social awareness initiatives such as motorbike rallies, cleanliness campaigns and musical ventures which roped in artists such as Atif Aslam, Arieb Azhar and the band Strings to name a few.

When Strings and Atif Aslam made their video “Ab Khud Kuch Karna Parega” it was made a part of the social awareness campaign right away. However, this event was held to not only launch Fuzon’s new song but to also make it the official soundtrack of this year’s “Azme Alishan National Song Competition” which is currently being aired on different TV channels.

Media owner and Azme Alishan patron Taher A Khan expressed his gratitude to the band for helping out and for their part, they said they were honoured to be involved. “Wherever we go we want to be identified as a Pakistani band because we are who we are because of our fans,” Fuzon guitarist Shallum Xavier said.

Keyboard player Imran Momina aka Emu echoed this by saying that this was just one way to pay back. Vocalist Rameez Mukhtar said that they wouldn’t think twice before becoming part of such a venture again.

For your supper: Artists sing out their demands for better funding, air time