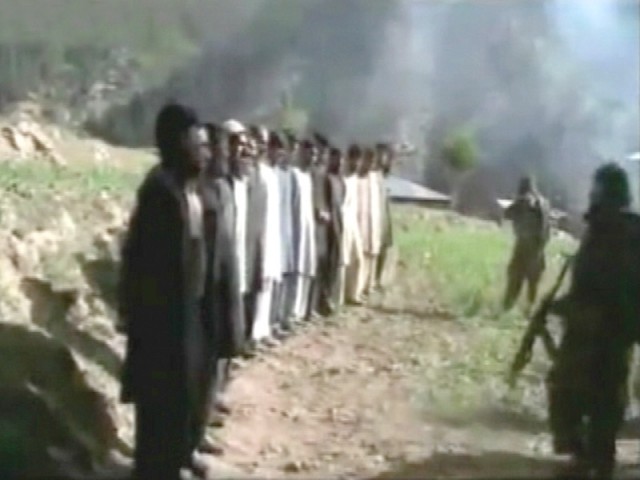 The Taliban line up the security personnel before shooting at them in a firing squad style. PHOTO: REUTERS

The Taliban have released a video showing the execution of more than a dozen security forces in the Upper Dir district last month, police said.

The video, posted on the LiveLeak website, shows at least 15 men in shalwar-kameez suits, lined up before four militants with their faces covered.

Army spokesperson Major-General Athar Abbas said that the security men had been captured by militants during a cross-border raid in Dir district on June 1.

A senior police official said the video was filmed on the same day, while Mian Iftikhar Hussain, information minister for Khyber-Pakhtunkhwa, also confirmed that the video was from Upper Dir.

A commander, seemingly Taliban, and other bearded fighters armed with Kalashnikovs and rocket-propelled grenades stand in front of the apparent policemen, none of whom are in uniform.

The commander then delivers a brief speech, declaring policemen enemies of Islam and deserving of death.

“These are the enemies of Allah’s religion and have left Islam. Allah orders to kill such people,” he says in Pashto.”We arrested them in fighting here. They killed six innocent children in Swat in the same way,” he claims.

The commander and his fighters then opened fire on the men, who cry out in pain. They later pumped bullets into the still alive victims at close-range.

Mir Qasim Khan, police chief for Upper Dir district, put the number of victims in the video at 18. “This was a pre-dawn attack and that’s why most of them are not wearing uniforms,” he said.

Another police official said that at the time 500 militants, including Afghan and Pakistani Taliban, took part in the attack which began before dawn on June 1 and continued throughout June 2.