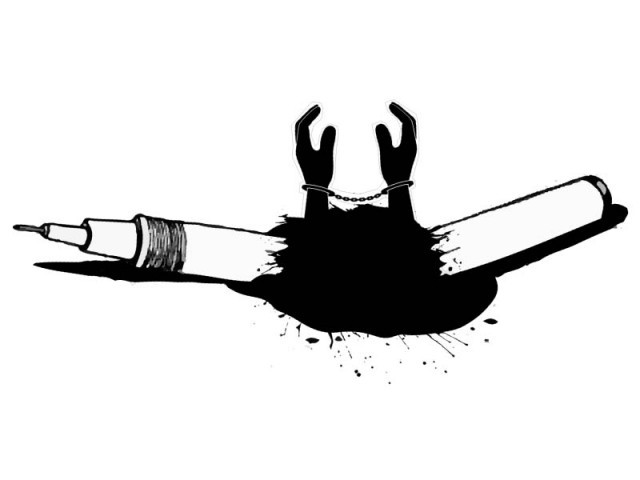 KARACHI: What happens if you expose the white collar crimes of influential people? If you’re a journalist in rural Sindh, you might end up being charged with kidnapping for ransom or extortion under the Anti-Terrorism Act (ATA).

Over 30 FIRs have been registered against 50 journalists in different districts of the province, including Nawabshah, Naushero Feroze, Jacobabad, Khairpur, Sukkur and Thatta, since May 2019.

“I know how to write,” said Ajeeb Lakho, a former president of the Ghambat Press Club. “I just know how to highlight issues of public interest that the people want to know about, so that the authorities can take action.”

Sixteen cases, including ATA cases, have been lodged against Lakho at different police stations in Larkana, Shikarpur, Naushero Feroze and Khairpur since May 23. The FIRs include charges of kidnapping for ransom and extortion.

Meanwhile, four cases have been registered against Imdad Phulpoto, a journalist in Sukkur, since 2017. “I am a journalist, not a kidnapper or a terrorist,” Phulpoto told The Express Tribune. “False and fabricated cases have been lodged against me and other journalists. But nobody actually listens to us because the people behind these cases are more powerful than the media.”

Of the cases lodged against him, two were registered in 2017, one in 2018 and one in July this year. The last FIR falls under the ambit of the anti-terrorism courts.

“Influential people want us to report according to their wishes. They want us not to disclose the truth about them to the world,” maintained Sahil Jogi, another Sukkur-based journalist. “Cases of attacks, kidnapping for ransom and other heinous crimes are constantly being lodged against those journalists who speak and write the truth.”

He added that four cases had been registered against him too, including two FIRs for attacks and robbery. All cases were registered at the Pano Aqil police station. He believed that the charges were meant to stop journalists from reporting facts. “This is creating some fear among media workers, but I don’t think it will work,” he stated.

Meanwhile, Phulpoto said that media persons were usually considered as people with influence in society. “In Sindh though, our voices are not being heard,” he added.

According to Ghazi Jhandeer, a journalist in Karachi, most of the cases have been registered in Sukkur and Khairpur districts. “Most of these cases are false cases of kidnapping for ransom,” he claimed.

Discussing the case against journalist Peeral Piasi, from Thatta, Jhandeer said that he was charged for extortion because of a story he wrote about gutka sales. “Interestingly, the complainant owns a gutka factory,” he narrated, adding that such cases were meant to serve as a warning for other journalists, telling them not to highlight these issues.

On Wednesday, the issue was raised during a meeting of the Provincial Public Safety and Police Complaint Commission chaired by Sindh Chief Minister (CM) Syed Murad Ali Shah.

Shah was informed by members of the commission that journalists in various districts were being booked in cases, including those pertaining to the ATA. When Shah asked Sindh IGP Dr Kaleem Imam about the matter, the provincial police chief claimed that he was not aware of the cases. He said he would share details about them in the next commission meeting in January.

Karamat Ali, a member of the commission, confirmed that the issue of FIRs against journalists was discussed during the meeting. He told The Express Tribune that it seemed that the cases were being registered due to the influence of powerful persons in the areas. “Most of the cases were registered in Sukkur division,” he revealed, expressing his hope that the CM would take action after the report.

“Journalists are facing many difficulties outside Karachi,” said Ali. “But their issues hardly get attention in the provincial capital.”

Journalists have staged demonstrations to protest the cases in various cities across Sindh, while some of those nominated in the FIRs also met politicians and senior police officials to discuss their plight.