India has some of the toughe­st anti-rape laws but it has little impact­
By Reuters
Published: December 13, 2019
Tweet Email 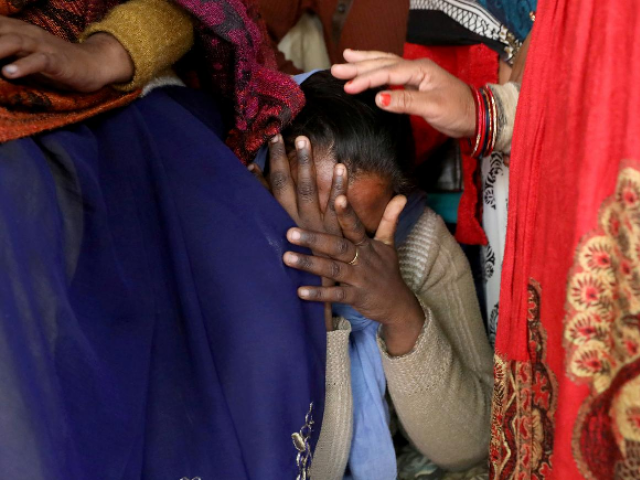 A relative of a 23-year-old rape victim, who died in a New Delhi hospital on Friday after she was set on fire by a gang of men. PHOTO: Reuters

HINDU NAGAR: When the young woman limped toward shopkeeper Ravindra Prakash, pleading for help on a dark and foggy morning in the northern Indian village, her body was so charred that he thought she was a witch. He grabbed a wooden stick and tried to shoo her away.

As she came closer, under the dim light of his shop, it took Prakash a few minutes to realize she was from his village, Hindu Nagar, in India’s most populous state of Uttar Pradesh.

He called the police. In a shaky voice, the 23-year-old woman narrated her ordeal to an official on the other line. She said she had been beaten and set ablaze in nearby fields by five men from her village – including two she had accused of having raped her last year.

That morning of Dec 5, the woman had set out early to catch a train that was due to depart around 5 am to meet her lawyer to pursue her rape case, according to her statement in a police report. After she was burnt, the government ordered her moved to a hospital in New Delhi, where she succumbed to her injuries late on Dec 6.

While her death has sparked nationwide outrage, her village stands divided over it, largely over caste lines.

The woman belonged to a lower caste of blacksmiths. The five men accused of her murder are from Hindu Nagar’s dominant landowning caste. Many upper-caste villagers defended the men and questioned the woman’s character, some dismissing her death as a love affair gone wrong. Others accused her of falsely trying to implicate the men, whose families insisted on their innocence.

“She had big plans for herself,” said her father, who makes chisels, shovels and other farm tools on a road outside the village. Sitting with his head bowed on a chair outside his mud home, as villagers gathered around to watch, he said: “I want justice for my daughter. I want her killers hanged.”

The divisions in Hindu Nagar, a village of roughly 2,000 people surrounded partly by yellow mustard fields, illustrate India’s challenge in addressing a rape problem that women’s rights groups say is common across the country, particularly in rural areas. A rape occurs every 20 minutes, on average, in the country of 1.3 billion people, according to federal data.

The brutal gang rape and murder of a young physiotherapist on a Delhi bus in 2012 provoked such widespread revulsion that India enacted some of the world’s toughest anti-rape laws, including the death penalty in some cases.

But it has had little impact, women’s rights experts say. Cases are reported, but government data shows that conviction rates are low.

In another attack this month, a 27-year-old veterinarian was raped and murdered near the southern city of Hyderabad. Police shot dead four men who had been arrested for the attack, claiming that they had tried to escape.

‘These are powerful people’

Often victims and their families go up against powerful people and harsh caste dynamics, especially in rural India, where two thirds of the country live.

In Hindu Nagar, caste lines are visible from the street. Homes built of cement belong to the upper castes. Mud-and-thatch huts are inhabited by the lower castes. After the attack, dozens of police officers were employed to maintain order as crowds of journalists and politicians descended on the village.

The two men that the woman had identified as the main perpetrators in her rape – Shivam Trivedi and Shubham Trivedi – are both upper caste members of the family of the village headwoman, Savitri Devi Kundan. Shubham is her son. Shivam is his cousin. Kundan told Reuters that the five accused, including her son, had been falsely accused.

Reuters was unable to contact the men, who are being held in jail in a nearby town. Their family members said they were in talks to engage a lawyer to fight the murder case. Pradyuman Shukla, a lawyer who represented Shivam Trivedi in the rape case, said his client had been “falsely implicated” of rape. Shukla said he had not been contacted by the family regarding the murder case.

Dozens of women and young girls from the family of the accused men marched on a dirt road in the village on Saturday shouting slogans refuting the allegations against them. They said the men were innocent and asleep at home that morning of the alleged murder.

They called for a federal inquiry into the incident, and accused the woman of trying to lure Shivam Trivedi into a “love trap” for his money.

“She must have poured petrol over herself to take revenge since he didn’t want to marry her,” said Preeti Bajpai, the sister of one of the accused, Umesh Bajpai.

Vikrant Vir, the superintendent of police in Unnao district, where Hindu Nagar is situated, told Reuters on Wednesday that an investigation into the case was underway.

“The policemen have been suspended for dereliction of duty. A special investigation team has been formed on my recommendation, and we are probing the case.”

The Uttar Pradesh government spokesperson did not respond to calls or emails seeking comment.

Most lower-caste women do not study past high school in Hindu Nagar, and many are married by their teens, villagers said. The victim was among the few who had graduated. She applied to become a policewoman but missed the interview last year as the public bus she took had been late, her father said. She didn’t try again because vacancies in the Uttar Pradesh police are infrequent, her father said.

Based on identity determined at birth, the hierarchical social order, prevalent in Hinduism, deems romantic relationships that cut across caste lines as socially unacceptable.

The woman’s relations with Shivam was seen as unacceptable by many upper caste people in the village, more than a dozen villagers Reuters interviewed said.

It was in Dec 2018 that she first went to the police to file a complaint saying that Shivam Trivedi and Shubham Trivedi had misled her into accompanying them to the fields and raping her at gunpoint on Dec 12. She got home and told her aunt and the local police the same day, according to her complaint.

She filed at least three complaints to police between Dec 2018 and Feb 2019 accusing the men of rape. Police registered her case in March, according to copies of the complaints reviewed by Reuters.

In that March 5 report, the woman alleged Shubham Trivedi had raped her multiple times in 2018 and made false promises of marriage. At one point, he took her to the neighboring city of Rae Bareilly and briefly locked her up in a room, threatening to kill her if she tried escaping, the report said.

Over the next few months, she wrote repeatedly to the police, asking them to speed up the investigation and arrest the accused. “Despite my complaints, neither have I been medically checked, nor has my statement been taken, and nor have my rapists been arrested,” she said in an April 1 letter to police. Police did not respond to comment on the letter.

“Because of police inaction, the family of the accused are emboldened and are harassing my family and threatening me to force me to withdraw my case.”

She moved to an aunt’s home in Rae Bareilly in March, fearing for her life, according to the police reports. But she returned weeks before the incident because she missed her family, her aunt said.

“I had asked her not to go back,” she said, referring to the village.

In a July 12 letter, the woman threatened to kill herself if the police didn’t act on her rape complaint.

‘From make in India, country heading to rape in India’

Shivam was arrested on Sept 19, but was out on bail on Nov 30 – days before she was set on fire.

‘Now who will fight?’

When the shopkeeper Prakash saw the woman on the morning of her attack, the ends of her short hair were scalded and her clothes had been burned off her body, he said. Still, she had walked nearly half a mile from the fields where she was attacked to his shop in trying to reach the police station, police said.

The Uttar Pradesh government has promised the woman’s family payment of 2.5 million rupees ($35,000), and a gun license for the woman’s brother to protect the family. It has also suspended seven policemen from the area for negligence. Calls to the phones of the suspended policemen went unanswered.

The mud hut where the woman lived had few belongings except a wooden bed, religious idols on walls, and a small basil plant that the family worshipped – a common practice in Hindu homes. Her grieving family said they were living in fear of reprisals from the accused men.

“She was the only educated and sensible person in the family,” said one of her uncles, breaking down as he spoke. “None of the men in our family are as brave as she was. She was fighting all alone,” he said, referring to the hierarchy in the village. “Now who will fight?”