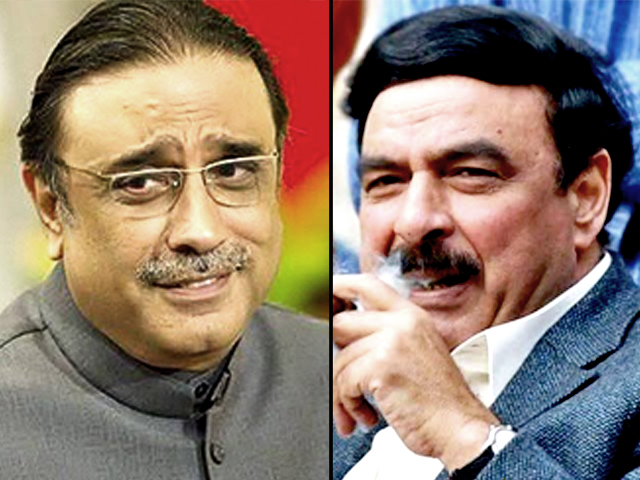 ISLAMABAD: Railways Minister Sheikh Rashid Ahmed on Thursday claimed that Pakistan Peoples Party (PPP) co-chairman Asif Ali Zardari, who has been released from prison on medical grounds earlier in the day, is likely to return the nation’s “looted wealth” through a plea bargain by March 2020.

Speaking to the media in Islamabad, Rashid, who is also chief of the Awami Muslim League (AML), expressed satisfaction over the release of the former president.

In the same breath, he warned that PPP Chairman Bilawal Bhutto-Zardari’s political career would be bleak if his father did not strike a plea bargain with the National Accountability Bureau (NAB) in corruption references.

On Wednesday, the Islamabad High Court (IHC) had approved Zardari’s bail in corruption cases filed by NAB and directed him to submit two surety bonds worth Rs10 million each to the accountability court.

The 64-year-old had been in the custody of anti-corruption watchdog since his arrest on June 10 following the cancellation of his pre-arrest bail by the IHC.

“The upcoming days are very crucial, plenty of [looted] wealth is coming back to the country through plea bargain,” Rashid added.

Moreover, the federal minister also expressed regret and condemned the Wednesday’s incident at the Punjab Institute of Cardiology in Lahore in which scores of lawyers allegedly ran riot rampaging resulting in death of three cardiac patients.

“The entire nation is in the grip of grief and sorrow over the shameful act of lawyers,” he added.

In a first, Saudi Arabia to host women’s golf tournament