The unsettlement project: 16 years without reprieve in Taiser Town

The unsettlement project: 16 years without reprieve in Taiser Town 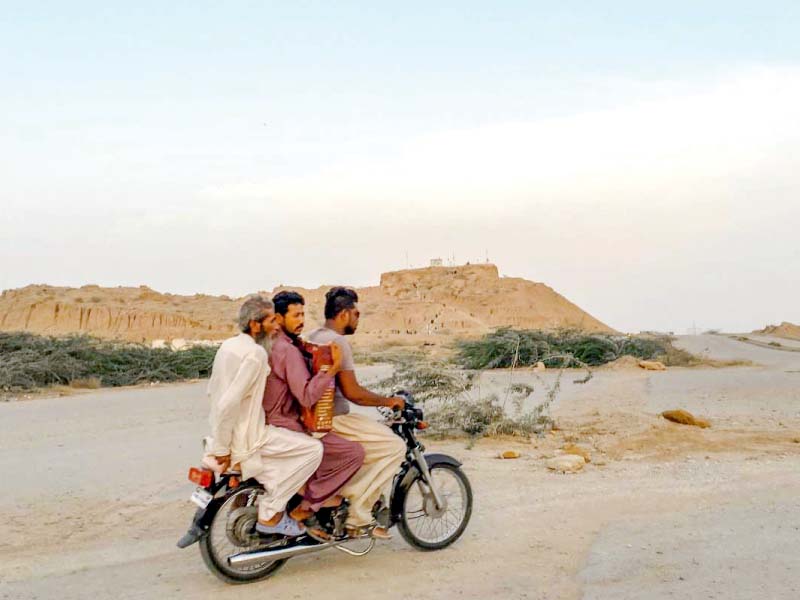 KARACHI: As clouds disperse from the monsoon sky, Rukiya Begum takes to her usual spot under the canopy of Neem trees lining her residence. She, with a few neighbours, sits there mending the seams of a frazzled kameez. “It’s unbreathable inside that stuffy house, at least here we can breathe while doing our chores and vent our woes to each other,” she sighs, finely threading the needle.

Rukiya is a meagerly paid housekeeper with a family of eleven. She, like many of her neighbours, lives on a scantily constructed, 80-square-foot property allotted to her in the stony desolation of Taiser Town Scheme 45 – one of the three resettlement schemes established for those displaced by the construction of the Lyari Expressway in 2002.

Sixteen years ago, with no roof above her head and drawn by the government’s promises of a better future, neither Rukiya Begum nor any of the 140,000 people displaced by the megaproject could begin to fathom the unsettling turn their lives in the resettlement schemes were bound to take; stuck in the urban hinterland, long absent and soon forgotten.

To avoid damages, govt must go for settlement with TCC

The commute to Taiser Town is more than an hour’s drive from the main city – shifting through narrow dirt roads, barren hillocks, thorny shrubs and the occasional honks of industrial trailers. But when one does make the journey to the back of beyond, what waits is a far cry from the ‘model township’ the Lyari Expressway Resettlement Project (LERP) once advertised its resettlement schemes to be.

Ansar Ali, a frail-looking man in his late 50s working for the NGO Human Rights Foundation of Pakistan (HRFP), has been striving for the betterment of the resettlement scheme for over a decade. “I do what I can to legally help the people, but the mafias here hate my guts for being outspoken, for which there’s always a target painted on my back,” he shared.

Speaking to The Express Tribune, Ali revealed several folders of legal documents, maps and letters, all of which have been gathered as incriminating evidence over years in pursuits of voicing the plight of Taiser Town, after his own wife succumbed to the lack of immediate healthcare service in the neighbourhood, in the summer of 2010.

The NGO worker’s wife is not the only one affected by the absence of healthcare in the area. A short walk from one end of the street to another revealed that almost every other house had a case to remember, each more morbid than the other.

“My daughter-in-law wouldn’t have survived the long wait for the ambulance and neither could we afford the thousands of rupees they demand to come here,” remarked Rukiya Begum. “Only God knows how my son was able to rush his pregnant, wailing wife to the hospital on a motorcycle,” she added.

“When a dog bit me last year, I had nowhere to go but to the nearest market for a gram of turmeric powder and pray for the wound to not get infected, but it did,” said Manora Khatoon, an elderly resident of Taiser Town, displaying her wounded leg.

Despite Ali’s several letters directed to the relevant health official, asking him for aid and to expedite the long halted construction of a 36-bed medical centre for LERP, to date the Jinnah Postgraduate Medical Centre and Dr Ruth Pfau Civil Hospital Karachi, remain the closest emergency services accessible to the people of Taiser Town. This means that the average ambulance response time in the township is at least 40 minutes too late. A study by the National Health Service (NHS) on international ambulance standards reveals that the average ambulance response time should be approximately 18 minutes for emergency calls and 7 minutes for life threatening injuries and illnesses.

Civic amenities or the lack thereof

However, the dilemma for Taiser Town or the greater Lyari Expressway Resettlement Project has never been the shortage in provision of developmental funds. According to Ali, it’s rather the funds being guzzled by fraudulent groups and the many stakeholders in the schemes without any accountability by the state.

As per a statement issued to a local newspaper by the then LERP Director Mr Shafiq Paracha, erstwhile Karachi Electric Supply Corporation (KESC), now K-Electric was allocated Rs400 million for the electrification of all three resettlement schemes under the project.

By 2006, electricity works in Taiser Town’s sectors 50 and 51 were said to be underway and a document procured by Ali revealed that 2009 marked the last cheque worth Rs50 million, which was duly deposited to the electric company, to finalise the town’s electrification. Yet, 13 years later, the said sectors are still forced to rely on illegal kundas as the town’s primary means of securing electricity, for which the residents often have to bribe officials and suffer harassment at their hands.

Other amenities like gas and water are also scant in the forgotten resettlement colony. Although underground pipelines were laid during the inception of the project, the flow never quite graced the pipes, rendering them damaged after several years of remaining unutilised.

Talking about the plan for the provision of water, Ali revealed that initially the LERP would routinely provide the colony with water tankers but they stopped doing so in 2010 when the funds ran out. “Now, we spend a portion of our already meagre income to buy water tankers which keep getting more expensive by the day,” he lamented.

“Take a photo of Abdul Qayyum, and tell everyone he prays five times a day but runs ten times to the mosque to utilise the toilet because he cannot afford to buy water in his own house,” blurts Mukhtar, a loud-mouthed resident of the colony while pointing towards a bearded, middle-aged man. The latter meekly smiles at the awkward confrontation.

The longer one stays in the town, the more distant it appears from the greater Karachi city until one eventually forgets that the town, in fact, exists within the city limits – a sort of disassociation 16 long years in Taiser Town has cast upon its residents, who often tend to refer moving anywhere beyond it as going to the city, forgetting they are in one.

A den for the mafias

As the sun sets upon the desolate township and shadows grow taller, it begins to appear that streets of Taiser Town are not a safe place to be. Curtains drawn, windows shut and gates locked; even the gaggle of women under the neem tree retires to the stuffy confines of their homes. What remains is the unshakable feeling of being watched.

“With no fence but a single unconcerned police van, crimes are rampant here and all kinds of mafias come out to play in the dark,” reveals Ali as he hurriedly traces his steps back to his associate, trying to avoid any unwanted attention from the keenly observing men on the corner of the street. “They’re the qabza mafia, they’ve occupied and sold all this land meant for public schools,” he whispers discreetly hinting at a cluster of plots.

While time flows like a swiftly meandering river through the hustle and bustle of the growing metropolis, it seems to stand still in forgotten urban spaces like Taiser Town, where development never reached. Those who could afford it took their chances and fled the township to live and work in the heart of the city, leaving behind clusters of empty or half-built plots. But those who could not, find themselves forgotten and left to whither in this deplorable ghost town.

“Maybe if I still lived in the city, I would’ve been able to give my kids a better life, but there’s no hope here, only misery in this godforsaken town,” said Rukiya Begum, her words echoing the sentiments of her neighbours.