All settle­ments are viewed as illega­l under intern­ationa­l law
By AFP
Published: September 15, 2019
Tweet Email 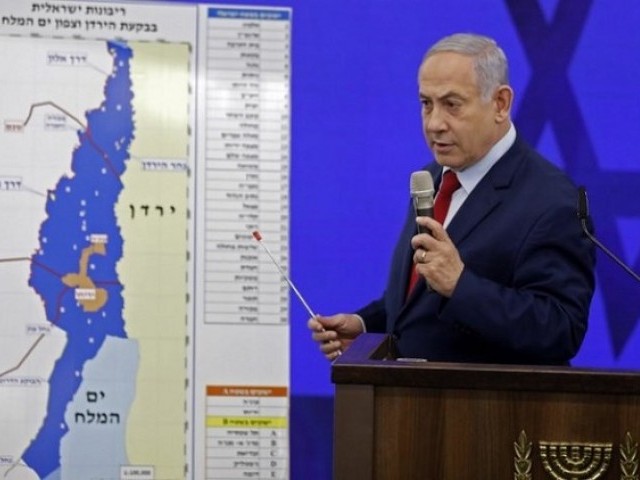 Netanyahu’s cabinet agreed to turn the wildcat settlement of Mevoot Yericho in the Jordan Valley into an official settlement, the premier’s office said.

All settlements are viewed as illegal under international law, but Israel distinguishes between those it has approved and those it has not.

Sunday’s approval follows Netanyahu’s pledge last week to annex the Jordan Valley, which amounts to one-third of the West Bank, if he wins Tuesday’s elections.

“The government passed the PM’s motion to build Mevoot Yericho,” a statement from Netanyahu’s office said as the weekly cabinet meeting was convened ceremoniously in the Jordan Valley.

How elections in Israel work

Netanyahu has also said he intends to annex settlements in the wider West Bank, but in coordination with US President Donald Trump, whose long-awaited peace plan is expected to be released after the election.

The prime minister’s annexation plans could effectively destroy any remaining hopes for a two-state solution to the Israeli-Palestinian conflict.

The Palestinians, the European Union and the United Nations condemned Netanyahu’s Jordan Valley announcement last week.
Netanyahu said the Jordan Valley annexation would not include Palestinian cities such as Jericho, but it would effectively be encircled by Israeli territory.

Netanyahu is locked in a tough re-election battle with ex-military chief Benny Gantz and his Blue and White centrist alliance, and right-wing nationalist votes are key for his Likud.

Iran hits back at US after Saudi attacks accusation