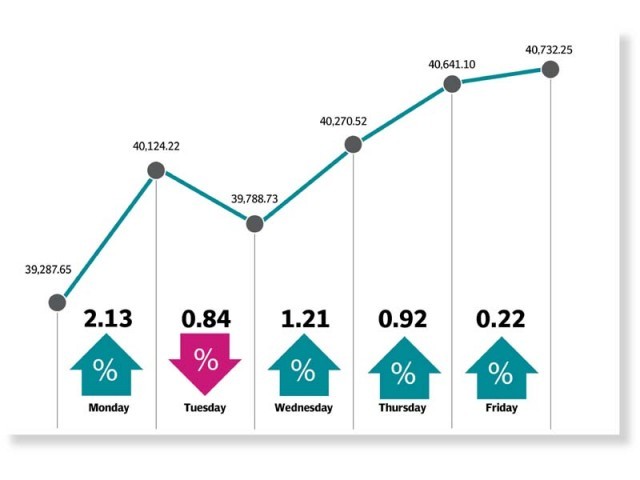 KARACHI: Bulls maintained control of the stock market for the sixth successive week as positive developments on the economic front propelled the index 1,445 points or 3.7% higher to settle at 40,732 points.

Investors were euphoric following news of global credit ratings agency Moody’s changing its outlook on Pakistan from “negative” to “stable” on account of improving external account position of the country on the back of the government’s corrective measures. The development stimulated buying interest, leading the index to power past the 40,000 mark after a hiatus of 10 months.

Moreover, Adviser to PM on Commerce Abdul Razak Dawood took to twitter on Sunday to announce the improvement in Pakistan’s trade balance and current account deficit, which fuelled the rally further.

Things took a turn on Tuesday as the uptrend in the market came to an end with the index succumbing to price correction as investors opted to book profits. However, the bearish run was short-lived and the index traded in the positive territory in the following three sessions.

During the week, Moody’s also upgraded the outlook for the five big banks to ‘stable’, which spurred buying activity in the banking sector. Consolidation of the country’s foreign exchange reserves also helped matters as central bank reserves touched an eight-month high at $9.1 billion.

Although the inflation figure for November clocked-in at a nine-year high at 12.7%, investors remained unfazed due to other positive economic macros.

Increasing optimism also brought healthy participation with volumes up 34% week-on-week to an average of 465 million shares per day; touching a 30-month high of 557 million during one single trading session. Meanwhile, average value traded jumped 31% week-on-week to clock-in at $105 million.

Among major news of the week was; SBP’s foreign exchange reserves hit eight-month high at $9.11b, Pakistan submit compliance report to FATF, Moody’s upgraded Pakistan’s outlook to ‘stable’ from ‘negative’, and inflation clocked-in at 12.7% for November.

Kinnow exports to go down this season