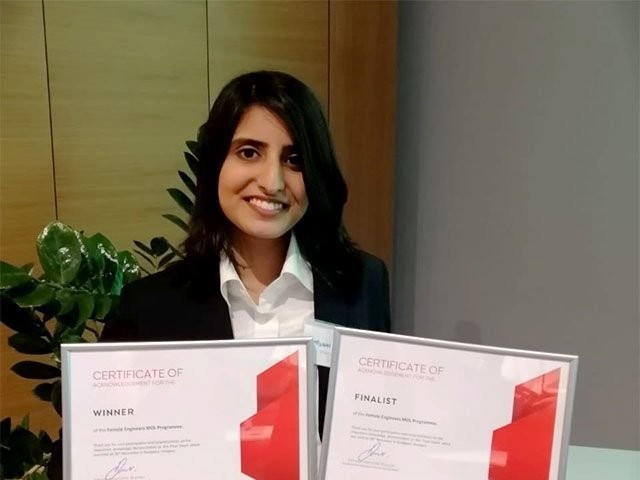 Misbah Hamid with her certificates of winner and finalist in Budapest. PHOTO: Facebook/Misbah Hamid

KARACHI: Twenty-year old Misbah Hamid, a final year student at the National University of Science and Technology (NUST) in Islamabad, will get a job at one of the world’s biggest oil and gas companies, MOL Group, after winning a competition for female engineering students in Budapest.

She also won over half a million rupees (€3,000) in prize money along with future trips to the Hungarian capital for training and development, and the opportunity to work at the Fortune 500 firm.

As one of the 120 applicants taking part in the competition for women in STEM (science, engineering, technology and math), Misbah was up against participants from 29 universities from four countries.

She was one of three people shortlisted from Pakistan – with the other two being from Ghulam Ishaq Khan University and Quaid-i-Azam University. They joined three finalists each from Hungary and Croatia, and two from Slovakia.

“When I told my family that I had been shortlisted and would be travelling to Budapest, they were extremely proud and supportive. This was despite the fact that I hadn’t told anyone except my mother about the application and it would be my first international trip – and that too alone,” Misbah told The Express Tribune. “My father’s exact words were: ‘I know my daughter is going to win.’”

She aced her individual task about the benefits of gender diversity to the firm organising the competition, having already conducted a survey on female penetration in the oil and gas sector.

For the group assignment, Misbah teamed up with a participant each from Hungary, Slovakia and Croatia to come with a comprehensive business plan for a new revenue stream for the MOL Group that employs 30,000 people across 30 countries.

Tech revolution: Are Pakistani women being left behind?

“During the case study, I had to interact with people from different cultures, which was an eye-opener,” says Misbah of her experience. “Interacting with judges, which included previous competition winners, was also helpful as they shared their experiences.” 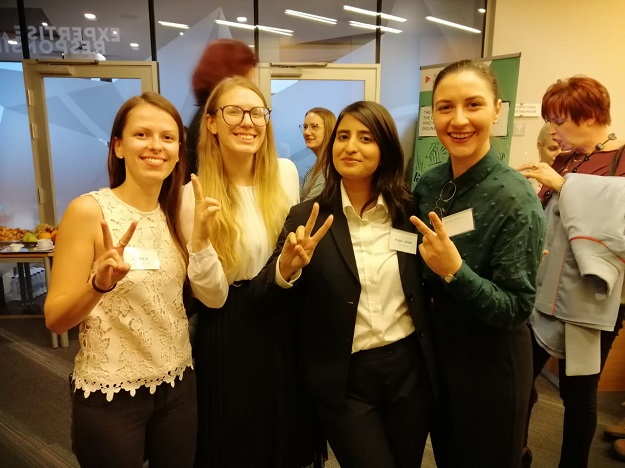 Misbah’s team for the case study, with participants from Slovakia, Hungary, Pakistan and Croatia (from left to right). PHOTO: Facebook/Misbah Hamid

Although the participants only had a day for sightseeing, Misbah had the opportunity to visit major monuments in Budapest including the parliament, the St Stephen’s Basilica, River Danube, ancient castles and the Chain Bridge that connects the hilly Buda district with flat Pest.

It even led to certain light moments, including getting lost in the capital where few people speak English and the signs are in the local language. “People kept asking whether I want to go to Buda or Pest, and I kept replying Budapest. It was only later that I found out that those are also the names of the the two major districts in the capital,” she said. 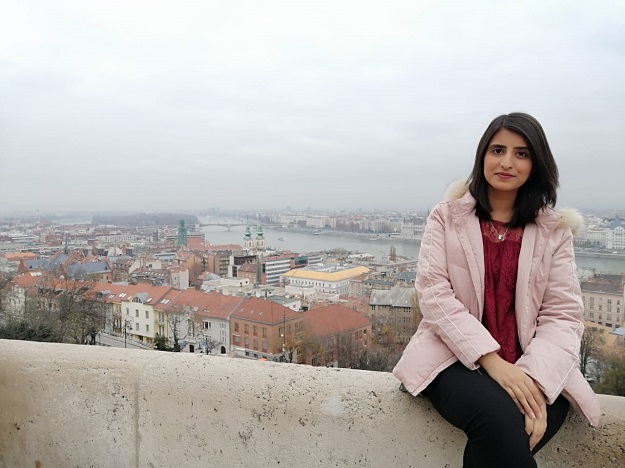 Misbah Hamid at one of the monuments in Budapest with the River Danube in the background. PHOTO: Facebook/Misbah Hamid

However, Misbah’s best memory of the 5-day trip remains winning first prize in the competition, become the first student from NUST, and third Pakistani to win the competition. Two students of University of Engineering and Technology Lahore, Sara Mujahid and Manhal Mumtaz, have previously won the competition, with both now employed at the MOL Group.

When I called my parents from Budapest to tell them about my victory, my mother started crying and my father told me that I had exceeded his expectations, she says. “It meant more to me than anything else.”

Misbah will have the opportunity to work at MOL’s oil and gas plant in Karak, Khyber Pakhtunkhwa, as electrical engineer after her graduation next year.

She is also likely to be invited as one of the judges for the next edition of the competition in Budapest.