Seven months after signin­g MoU with govt, Daewoo has been unable to operat­e a single bus in Karach­i due to dollar hike
By Syed Ashraf Ali
Published: December 7, 2019
Tweet Email 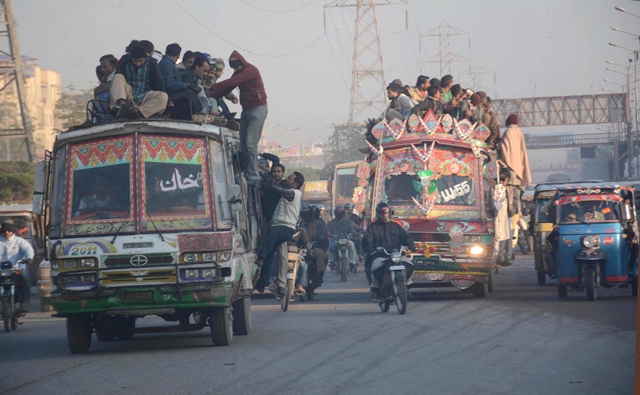 KARACHI: As Karachi continues to sprawl outwards, the lack of an adequate public transportation system remains a bane for the megacity. While the authorities have some high profile long-term initiatives in the pipeline, little has been done to address the metropolis’s growing need for affordable transport in the short run.

The provincial government had previously sought the assistance of the Daewoo private bus service in an attempt to manage the city’s burgeoning transport crisis. However, seven months after signing the memorandum of understanding, the company has so far been unable to add a single vehicle to the city’s dwindling fleet of around 4,000 public buses.

According to Sindh transport minister Owais Shah, Daewoo has already been issued a warning and the company hopes to bring in the promised buses within the next three months. “However, if the company fails to provide the promised fleet of buses, they are going to face penalties under the law,” he told The Express Tribune.

Shah explained that the Korean company had inked an agreement with the Sindh government to bring and operate 1,000 air-conditioned CNG buses in the city, the routes for which have already been planned by the provincial transport department. Under this agreement, the company would provide the buses in two installments.

The first instalment will introduce 200 modern buses onto the streets of Karachi and the remaining 800 will be provided over time. However, the delay in the provision of buses has created a void in the city’s affordable mass transportation system that private start-ups and transport services are attempting to fill.

Daewoo Chairperson Shehryar Chishti blamed the rise in dollar prices for throwing a spanner in the works of the project. “Now that the rupee is stable and the country is in a better economic state, we are working on importing the required buses from China and the service will soon be available to the citizens of Karachi,” he said.

According to him, the first fleet of 200 Daewoo buses is expected to arrive in Karachi by January of next year. “Tickets for the new buses will be charged at between Rs20 to Rs40 and the buses will operate on CNG fuel, which will be provided to them even during CNG station closures to ensure their smooth functioning.”

While Chishti hopes the new buses will considerably diminish the megacity’s transport crisis, Karachi currently requires almost 11,000 public buses to meet the needs of its growing population. In the past 16 years, the provincial government has done little to address the citizens’ concerns about an affordable mass transport system and the city of 15 million has been left at the mercy of ad hoc projects like Qingqi rickshaws and private transport companies.