'Eight children among 11 civilians killed in Turkish shelling on Syria'

'Eight children among 11 civilians killed in Turkish shelling on Syria' 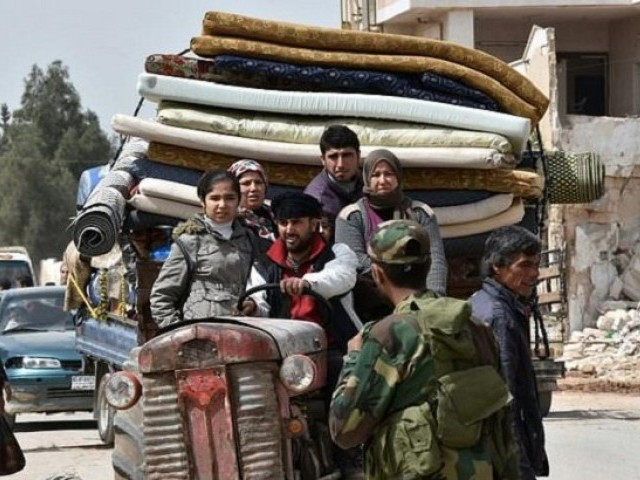 Syrians displaced from the city of Afrin arrive with their belongings in the northern Syrian town of Tal Rifaat . PHOTO: AFP/FILE

BEIRUT: Eight children were among 11 civilians killed on Monday in a Turkish artillery attack that hit near a school in a northern Syrian town in Aleppo province, a war monitor said.

The shelling on Tal Rifaat, controlled by local Kurdish fighters, took place as students were leaving the building and wounded 21 others, the Britain-based Syrian Observatory for Human Rights said.

Most of those killed in the attack were displaced from the Afrin region which was captured last year by Turkish troops and their Syrian proxies, Observatory head Rami Abdel Rahman said.

Tal Rifaat, a strategic town located 20 kilometres south of Turkey’s frontier, is the site of regular confrontations between Turkish-backed forces and Kurdish fighters they view as “terrorists”.

But Russia intervened to stop the planned offensive.
In October, it said it agreed to work with Turkey to remove all YPG militia “elements and their weapons” from Tal Rifaat.

The town’s population was initially comprised mostly of Arabs and Turkmen, but Ankara’s Afrin offensive last year sent waves of displaced Kurdish families to the area.

Turkey in October launched a cross-border operation south of its frontier against Syrian Kurdish forces it views as terrorists.
In the two months since the operation began, it has established a so-called “safe zone” in a 120-kilometre-long strip along its southern border, where it says it wants to resettle Syrian refugees.

Why London Bridge killer was released from jail early