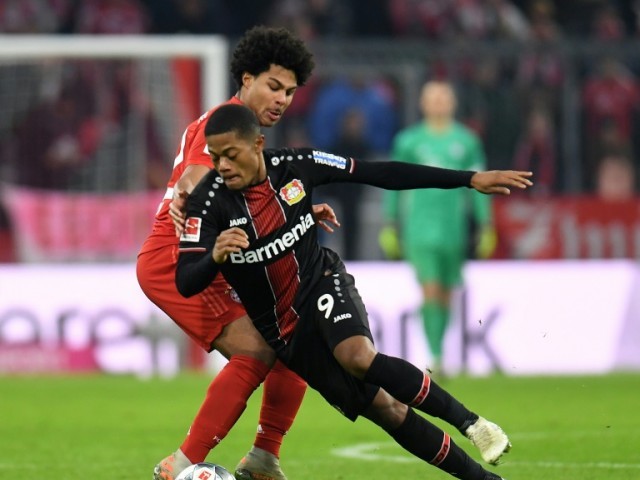 BERLIN: Leon Bailey scored twice as Bayern Munich crashed 2-1 at home to 10-man Bayer Leverkusen on Saturday, while RB Leipzig top the Bundesliga after a nervous 3-2 win at bottom side Paderborn.

Leipzig’s win over Paderborn allowed them to open a two-point lead over Borussia Moenchenglabach.

Flick, put in charge until at least January, had won his first four games with 16 goals scored and zero conceded — the best start by a coach in Bayern’s proud history.

However, little went right at the Allianz Arena for Bayern, who are fourth and trail Leipzig by three points.

“I didn’t flip out after winning four games and I won’t now,” said Flick.

“We knew Leverkusen were good on the counter and they took their chances mercilessly; we didn’t take ours.”

Bayern hit the woodwork three times, had 75 percent possession and 24 shots on goal, twice as many as Leverkusen.

The visitors were ahead on 10 minutes as Bailey glided past Benjamin Pavard after a brilliant Kevin Volland pass.

After Serge Gnabry, then Ivan Perisic had hit the woodwork, Thomas Mueller equalised on 33 minutes, but Bayern were level for just 113 seconds as Bailey this time motored past Javi Martinez to beat Manuel Neuer.

Bayern had little luck and even Robert Lewandowski, who scored four goals in 15 minutes in Tuesday’s 6-0 thrashing of Red Star Belgrade, failed to score.

Lewandowski fired wide, an unusual sight for the Poland star who has 27 goals in 21 games, then he hit the post in added time as Munich suffered only their second home defeat this season.

On Sunday, Moenchengladbach can reclaim top spot by beating Freiburg.

In Paderborn, Leipzig romped to a 3-0 half-time lead thanks to goals by Patrik Schick, Marcel Sabitzer and Germany striker Timo Werner, who netted his 13th league goal this season.

However, it was a completely different story after the break.

Paderborn, who earned a 3-3 draw at Dortmund last weekend, roared back with goals by striker Streli Mamba and captain Klaus Gjasula, but Leipzig held on.

“We made it more tense than necessary,” admitted Leipzig sports director Markus Kroesche.

In the capital, ex-Germany and USA head coach Klinsmann saw his Hertha team lose despite Dortmund playing the entire second-half with 10 men after Mats Hummels was sent off.

Dortmund are fifth — four points behind Leipzig — with their win easing the pressure on coach Lucien Favre.

“We gave everything. It wasn’t easy to defend in the second half with ten men,” said Favre.

Jadon Sancho backed up his superb Champions League strike at Barcelona in midweek with a fine finish after 15 minutes, then Thorgan Hazard made it 2-0 a minute later by stabbing home a Achraf Hakimi cross.

Vladimir Darida pulled a goal back for Hertha on 34 minutes while Hummels was sent off just before half-time for a clumsy foul on Davie Selke.

Guardiola’s agent rules out a return to Bayern Munich

Selke had a second-half goal ruled offside and Dortmund hung on.

There was eight cards in the first-half — equalling the league record — as Cologne drew 1-1 at home to Augsburg and both teams were reduced to ten men in the first 45 minutes.

Cologne goalkeeper Timo Horn saved a penalty by Andre Hahn after only nine minutes, then the hosts had defender Rafael Czichos sent off on 39 minutes for a second yellow.

Augsburg striker Florian Niederlechner scored, then Hahn was sent off just before the break for a second bookable offence.