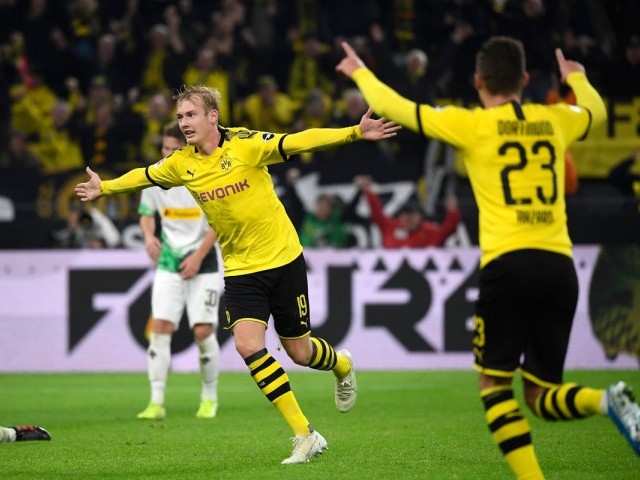 BERLIN: Borussia Dortmund attacking midfielder Julian Brandt says he hopes his side’s 2-1 midweek win over Borussia Moenchengladbach in the German Cup will mark a turning point in the season.

While some had the black and yellows as favourite to win the Bundesliga after an aggressive off-season recruitment effort, Dortmund sit in fifth place after nine rounds, with four wins, four draws and a loss.

New recruit Brandt scored two goals in three minutes in the second half of the German Cup tie, a welcome return to form for a player who had scored only once in 12 appearances for Dortmund prior to Wednesday night.

With pressure mounting on coach Lucien Favre, and a mounting injury list, Brandt said the win was just the tonic Dortmund needed.

“These games, these difficult games, give you a lot of confidence,” said Brandt.

“We are a young team, and we definitely have a lot to learn. We don’t do everything right, but if you can manage to win despite these difficulties, it’s like a balm for the soul.

“And if you win, the pressure will of course subside.”

Brandt himself had come in for stinging criticism after his performance in the Champions League against Inter Milan the previous week.

Former Dortmund forward and captain Michael Rummenigge criticised Brandt’s attitude and commitment in the loss to their major group rivals.

Dortmund told to get ruthless to stay in title race

“Normally I would never single out a specific player, but Julian Brandt in the game against Inter Milan? That was C-grade youth football, with no physical contact or assertiveness,” he said.

Brandt was unconcerned about any criticism he or the team may face for their performances, saying that difficulties were important in steeling the team for the challenges ahead.

“Overall, I think (such a result) welds us all together. It’s probably better than a 4-0 win,” Brandt said.

— Dutch winger Javairo Dilrosun has been a shining light in what has been a difficult season for Hertha Berlin, scoring three and assisting two in six games.

Dilrosun will be crucial for Hertha as they make the trip to neighbours Union Berlin for the first ever top-flight derby between the two teams from the German capital.

A product of Manchester City’s academy, Dilrosun followed in the footsteps of Borussia Dortmund’s superstar winger Jadon Sancho by moving to the Bundesliga in 2018 after being frustrated at a lack of first team opportunities with the English champions.

In addition to attracting the attention of English giants Chelsea and Liverpool, German media reports Dortmund are casting their glance towards Dilrosun, particularly if Sancho sets his sights on a move at season’s end.

15 – Robert Lewandowski’s goal tally for Bayern Munich so far this season. The next closest player? Timo Werner of RB Leipzig with 6.

9/9 – Lewandowski again, who became the first Bundesliga player to score in each of the first nine games of the season

300 – Lukasz Piszczek – and that man Lewandowski – will both play their 300th game this weekend. In addition to their time at Dortmund together, Piszczek and Lewandowski have also spent the best part of a decade playing for Poland at international level.

Busy Inter Milan have another chance to overtake Juventus