A grim reminder for Sindh on World AIDS Day

A grim reminder for Sindh on World AIDS Day 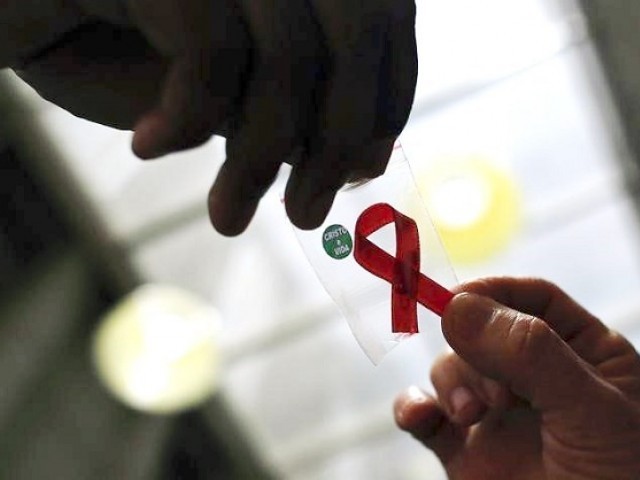 A nurse (L) hands out a red ribbon to a woman. PHOTO: REUTERS

KARACHI: On the occasion of World AIDS Day, observed each year on December 1st to raise awareness on the AIDS pandemic, countries across the world reaffirm their commitment to end the disease as soon as possible.

The situation related to the disease in Sindh this year, however, is still alarmingly grim as instead of spreading awareness, the Sindh AIDS Control Programme concealed accurate data from the Sindh government which led to an HIV/AIDS epidemic in the province.

According to statistics, in Pakistan, 150,000 people are living with the human immunodeficiency virus and the acquired immune deficiency syndrome (HIV/AIDS). Of these, only 36,902 have registered themselves with the National Aids Control Programme.

The province of Sindh is facing the worst situation, as over 15, 876 of the total registered people reside here. In 2019 alone, more than a thousand patients were diagnosed to be HIV positive in the province, many of them being children.

Even then, the Sindh AIDS Control Programme, which is run by the provincial health department, did not reveal the exact number of patients to the Sindh government as a result of which the virus affected hundreds of people in Ratodero and its outskirts, which is a sub-division of the Larkana district. As the situation got out of control, the Pakistan Peoples Party (PPP) chairperson Bilawal Bhutto Zardari had to intervene and direct his party’s ruling provincial government to take prompt action.

Shedding light on the gravity of the situation, the head of the Sindh Aids Control Programme, Dr Sikandar Memon told The Express Tribune that during current year, 1,195 HIV positive cases were reported in Ratodero, out of which 950 were children. In Larkana, 13 people even succumbed to the disease because of a delay in diagnosis.

“To handle the epidemic, the provincial government established two treatment centres in Ratodero for HIV patients, while a separate treatment unit was set up for affected children,” he said. “Moreover, the government has also established an endowment fund of Rs1 billion for the rehabilitation and welfare of the affected patients.”

He added that endowment fund is headed by the provincial minister of heath Dr Azra Fazal Pechuho, along with a five-member committee that decides the allocation of funds to assist the affected people.

“Even though the committee has been formed, no meeting has so far been conducted to discuss the matter,” he said.

Dr Sikandar Memon further said that in addition to the endowment fund, the Sindh government has also furnished an additional Rs600 million to the Sindh Aids Control Programme, whereas medicine is also being provided to affected patients free of charge.

“Since April 25, 2019, more than 37,005 people have undergone HIV screening in Larkana. According to the March 2019 statistics provided by the Sindh Aids Control Programme, there are 15,876 people in Sindh who are living with HIV,” Dr Memon informed The Express Tribune.

According to the National Aids Control Programme, Pakistan has 150,000 HIV positive patients, out of which 36,902 have registered themselves. The 20,944 registered patients are currently being administered the antiretroviral (ARV) drugs to maximally suppress the HIV virus and stop the progression of the disease.

In K-P, 4,266 have been diagnosed with the HIV/AIDS while over 5,000 people are suffering from the disease in Balochistan. The statistics for Punjab are currently not available.

HIV/ AIDS in the rest of the world

According to the annual report of the Global HIV/AIDS Organisation, there are 37.9 million people suffering from the disease across the globe. Out of the total, 3.62 million are youngster while 1.7 million are children. According to the organisation, approximately 1.7 million people become infected with the disease in 2018, out of which 770,000 have died. Due to advancement of medical sciences, however, death rates among affected patients have dropped by 55 per cent.

The report also showed that there are 5.9 million people living with HIV/AIDS in the Asia Pacific region out of which 3.2 million are undergoing the antiretroviral therapy (ART). Statistics reveal that 310,000 people contracted the virus out of which 200,000 have succumbed to the disease. The report further revealed that only 59 per cent of people know that they are living with HIV/AIDS.