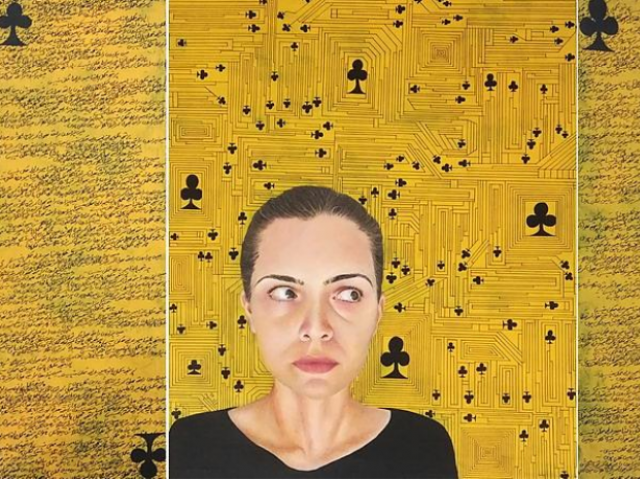 KARACHI: Past is something that always stays with us. Regardless of how vibrant our present may be, the memories help us carve a future that is better than before if not more colourful. A group of UAE-based artists recently came together to draw on their recollections in a showcase titled ‘Nostalgia’. Curated by G N Qazi and Hussain Chandio, it opened at Art Citi gallery on November 14. The exhibition featured a variety of works by Bushra Malik, Humaira Hussain, Kiran Saleem Shah, Sana Merchant, Masooma Rizvi, Shazia Jaffery and Tania Nasir.

“We spent quite some time on shortlisting the artists and allowed them the freedom to choose any medium they preferred – oil paint, acrylic etc,” Qazi told The Express Tribune.

Malik chose to paint in oil and acrylic. Her work revolved around the connections of soul and spirituality which she highlighted through traditional patterns overlaid with text. The paintings took on a very serene visual route as she played with a fairly cool and vibrant colour palette. The artist’s fragmented and ever-flowing nature-based paintings explored a genuine curiosity of varying strokes, starkly portrayed against negative spaces throughout her compositions. One of her works, ‘Jubilant I’ exuded the feeling of a gratuitous fleeting moment caught in its tangible beauty, with silhouettes of butterflies around an ensemble of flowers in the middle.

Leaving her home country was quite worrying for Shah. The only thing that could keep her together in difficult times was the Holy Quran. Using loud hues in the background, she painted the Quran in gold. “It held me, walked with me and consoled me in my times of darkness, making a pattern all that while. It was there when nothing else was and in that darkness, I was found,” Shah recalled.

Merchant used ink and acrylic in most of her paintings. Her piece ‘Intense’ beautifully depicted the struggle of Pakistan’s independence. She used loud colours to depict the period and merged them with lighter tones to induce peace and harmony.

Nasir, on the other hand, relied mostly on diagonal patterns alongside symbols such as that of a falcon to emphasise on self-determination and freedom. She described difficulties with red, victories with green and peace with blue. Gold showed the dreams that inspire to rise above.

Noor Jehan’s daughter pays her a tribute with her paintings

Rizvi’s subjects, apart from Sufis and mystics, were mirroring the basic constructs of a being; enveloped in an ardent moment, not posing nor acting but merely caught in an act of raw feeling. The moment of unification with God transcended visually by colourful light bursts that seemed to encircle the Sufis. They were not looking for something external. It felt more internal and also compelled the viewer to look inward, within their own selves.

Just like Rizvi’s Sufis portrayed spirituality, Jaffery’s female subjects spoke their mind, looking for something in this arduous world of uncertainty and misery which she called ‘The Cards of Life’. Her compositions reflected the systemised and constructed chaos in our lives as they visually portrayed geometric diamond shapes taken from playing cards and over laid with writings or minimal floral imagery.

The exhibition ended on November 27.