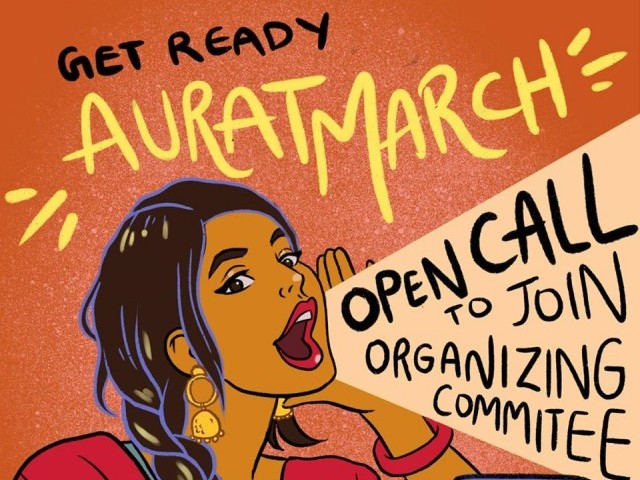 KARACHI: On Tuesday, the organising team behind this year’s Aurat March [Women’s March] issued a call for action on social media for people to help organise next year’s march.

The poster urged women, trans people, gender fluid, gender non-binary or any other marginalised gender group who want “to shake up the patriarchy and raise their voice for injustice” to help organise the country’s biggest feminist demonstrations to be held next year on March 8, the International Women’s Day.

According to the organisers, the post resulted in an unprecedented response and it was not limited to those who wanted to volunteer.

Within hours of the uploading of the poster, the Aurat March post received thousands of comments with the overwhelming majority being vile and sexist in nature.

“The troll army consisted mostly of misogynist, sexist men who made rape, death and various attack threats towards the organising committee of the Aurat March 2020 and to the women joining the organising team,” one of the organisers told The Express Tribune on condition of anonymity due to concerns regarding her personal safety.

Among those making the threats included two accounts belonging to Rubeel Khan and Kamran Ali. Both openly posted about their intention to rape ‘feminists’ in the comments section of the Aurat March 2020 poster. 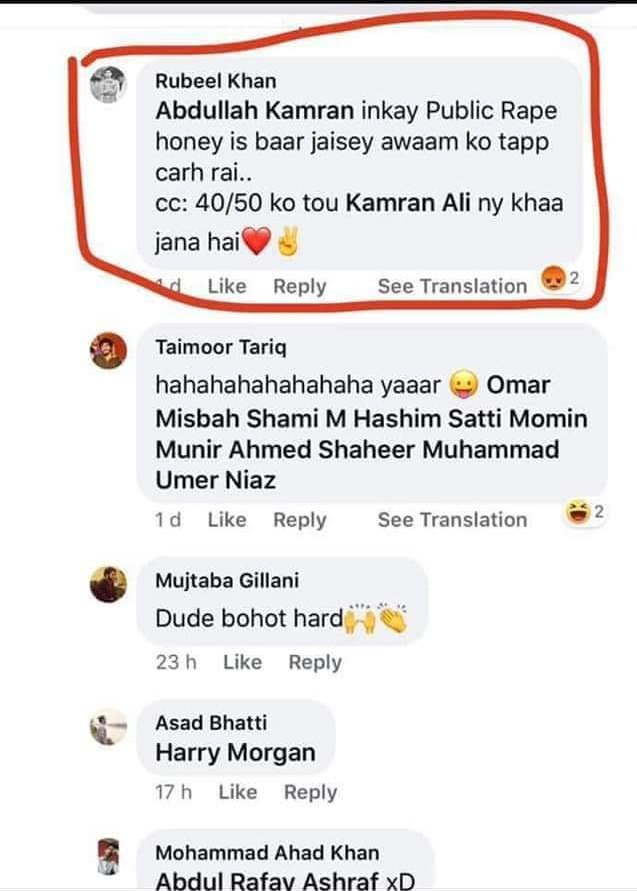 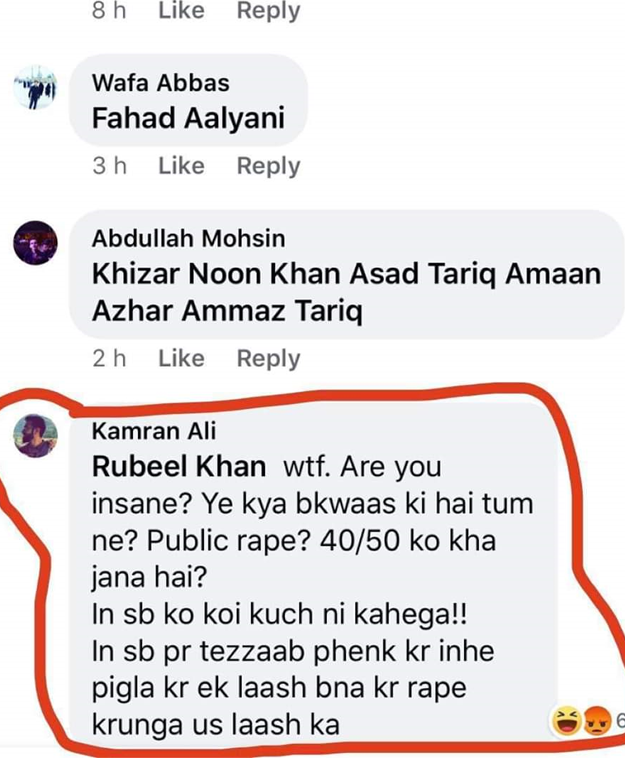 The comments drew social media ire with screenshots of the comments along with the profile, personal and professional details of the two shared on dozens of Facebook pages.

Less than 24 hours later, there were calls for reporting the two individuals to relevant authorities, including Facebook, as well as the Federal Investigation Agency and local police for making rape and death threats.

With the proverbial shoe, or in this case a hammering six-inch heel, on the other foot, Rubeel and his friend deactivated their Facebook accounts to escape the backlash.

It was in the late hours of Thursday that the two men reappeared on the social media platform. They have since apologised for their comments, but those following the developments have accused the post of being devoid of sincerity and disingenuous.

There are some screenshots being shared around on FB by some angry women (rightly so) about some offensive comments I made. I accept I made these comments on the post and I accept that afterwards I deleted them. Because I realised it was totally beyond limits. Therefore I sincerely apologize to the people offended.

I’m not a bad guy. It was NOT a threat of any kind. I DO NOT SUPPORT or encourage such immoral acts. It was just a BAD JOKE OFF LIMITS made in pure stupidity and I do realize it. I let slip words that were too insensitive. And therefore I apologize for it.

In no way, my university or my institutes are to be blamed for my stupid mistake.

Those who know me know that I have been a part of many Women Empowerment events (e.g. this photo is from GOOGLE WOMEN TECH event from LUMS) and I have been sympathetic to the feminist cause. 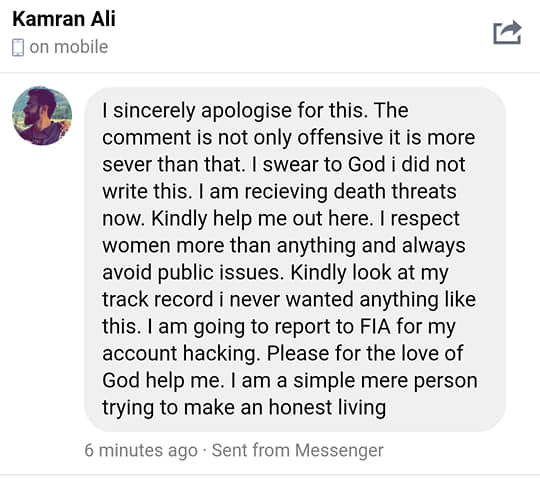 While speaking to The Express Tribune, one of the organisers of the march said that the backlash it received over the poster even dwarfs the vitriol directed at them in the wake of this year’s actual event – the Aurat March 2019.

“In social media numbers, this post has gained the most traction on our Facebook page this year,” she said.

The post received more than 3000 comments within an hour of being uploaded. But the majority of those were either threats or memes – ranging from obnoxious to downright threatening.

“It was so extreme with even the designer of the poster facing harassment on social media,” the organiser added.

The organisers say there is little that they can do about such threats in legal terms. “The maximum that can be done is to report them to Facebook. But since Facebook also works on some kind of biased algorithm, such instances of online harassment go unreported,” says the organiser.

However, she adds, the feminist collective, the Aurat March, was succeeding in one of its underlying aims: to call out unacceptable behaviour.

“By calling them out and shaming them on social media, we are at least making them realise that men won’t be allowed to get away with such behaviour.”

The Aurat March team says it is teaming up with legal entities to counter online bullying and harassment in future.

They are confident that their efforts are bringing about a change in the mindsets, something they say was not as palpable at the time of the previous marches.

All of these insecure men getting weak as the #AuratMarch2020 keeps on closing in.

You see rape threat’s, public shaming of participants and disgusting memes as a norm.

They don’t call masculinity fragile for no reason.

The irony of the situation, however, is not lost on those in the midst of it all.

According to one observer, the intensity of the vitriol in the wake of the call for public participation for next year’s march was a reminder that much needs to be done to ensure women are treated at par in a society where patriarchy and parochialism is strongly entrenched.

“No spaces, offline or online, are safe for women to talk about anything be it a woman raising slogans or a group organising,” the individual added.

They have started marching. Will they stop? Doesn’t seem so