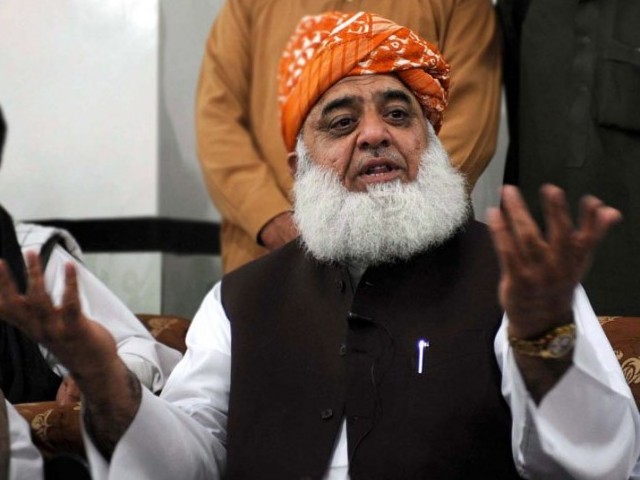 The Supreme Court in its short order gave the government six months to legislate and iron out the lacunae in the reappointment or extension of tenure of an army chief through an act of parliament.

“The court ordered parliament to legislate. Although we respect the court’s order, this fake parliament does not have the right, the nation’s mandate and trust to legislate on the law,” said Fazl while addressing a public meeting in Sukkur district on Thursday.

He reiterated his demand that the existing assemblies should be dissolved and snap polls should be called at the earliest to comply with the court’s order. “The illegitimate rulers have become a threat to the country’s security,” he emphasised.

Referring to Prime Minister Imran Khan, the JUI-F chief said the country’s ruler was oblivious of laws of the land and that “he is not even aware how a notification is supposed to be issued”.

“This is the way they [Pakistan Tehreek-e-Insaf’s government] have reciprocated to their well-wishers by subjecting the army chief to embarrassment,” he said.

“I think the well-wishers are also feeling discomfited like those who funded the party from abroad and the country’s youth.”

He said the opposition parties were unanimous that the PTI’s government lacked legitimacy and that new elections should be held in a free and transparent manner.

Fazl said the All Parties Conference held recently under his chairmanship in Islamabad the country’s political leadership agreed to spread the anti-government protests throughout the country. “If elections are not held timely, the protest movement will continue.”

The JUI-F’s chief warned that his party would no longer tolerate “stealing of their mandate in the general elections”, adding they have hitherto been accepting the controversial results.

Fazl demanded justice for the JUI-F’s martyred leader Dr Khalid Mehmood Soomro and deplored that the murder trial has not been making progress ever after the passage of five years ago.

He blamed the PTI’s government of influencing the accountability bureau to carry out political victimisation.

Fazl referred to the arrest of Pakistan Peoples Party’s leader Syed Khursheed Shah and termed his arrest an act of victimisation. He expressed concern over Shah’s health condition.

The students march today: here’s why