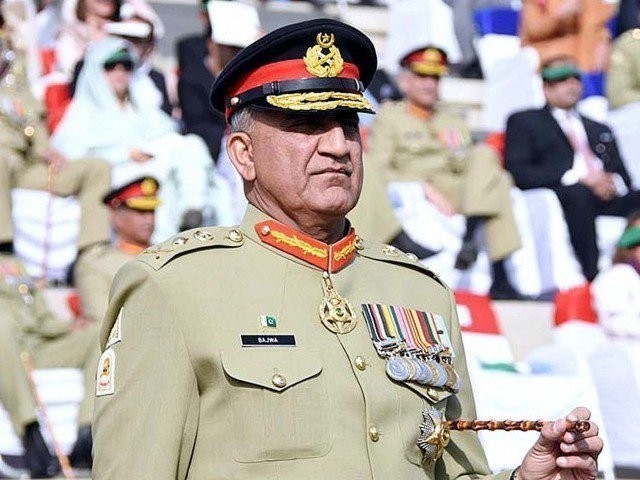 ISLAMABAD: The nation heaved a sigh of relief after tumultuous three days of grueling court proceedings, clerical gaffes, and legal lacunae, which at one point threatened to balloon into a serious crisis and lead to, what the prime minister called, a possible “clash of institutions”.

The Supreme Court on Thursday gave the government six months to legislate and iron out the lacunae in the reappointment or extension of tenure of an army chief – paving the way for the incumbent, Gen Qamar Javed Bajwa, to stay on until a new law determined his terms of service.

A three-member bench of the apex court, comprising Chief Justice of Pakistan Asif Saeed Khosa, Justice Mian Mazhar Alam Khan Miankhel and Justice Syed Mansoor Ali Shah, issued the verdict in the high-stake case following the state’s chief law officer submitted an undertaking to the court that parliament would bring in a new law on the matter within six months.

The ruling averted a crisis as the army chief was set to retire on the night between Thursday and Friday. On Tuesday, the court had suspended a notification issued by the prime minister in August for Gen Qamar’s reappointment till 2022 citing procedural loopholes.

“Considering that the COAS is responsible for the command, discipline, training, administration, organisation and preparedness for war of the army and is the chief executive in the General Headquarters, we, while exercising judicial restraint, find it appropriate to leave the matter to the parliament and the federal government to clearly specify the terms and conditions of service of the COAS through an Act of Parliament and to clarify the scope of Article 243 of the Constitution in this regard,” read a short order issued by the court.

“Therefore, the current appointment of General Qamar Javed Bajwa as COAS shall be subject to the said legislation and shall continue for a period of six months from today, whereafter the new legislation shall determine his tenure and other terms and conditions of service,” it added.

The bench noted that the federal government had “moved from one position to another referring to it as reappointment, limiting of retirement or extension of tenure and has also interchangeably placed reliance on Article 243(4)(b) of the Constitution and Regulation 255 of the Army Regulations (Rules), 1998.

“However, finally today the federal government through the learned attorney general for Pakistan has presented this court with a recent summary approved by the President on the advice of the prime minister along with a notification dated Nov 28, 2019 which shows that General Qamar Javed Bajwa has been appointed as COAS under Article 243(4)(b) of the Constitution with effect from Nov 28, 2019,” the order read.

“We have examined Article 243(4)(b) of the Constitution, Pakistan Army Act, 1952, Pakistan Army Act Rules, 1954 and Army Regulations (Rules), 1998 and in spite of the assistance rendered by the learned attorney general, we could not find any provision relating to the tenure of COAS or of a general and whether the COAS can be reappointed or his term can be extended or his retirement can be limited or suspended under the constitution or the law.”

The court noted that the attorney general had “taken pains to explain that the answers to these questions are based on practice being followed in the Pakistan Army but the said practice has not been codified under the law”.

However, the court observed that these laws did not specify the tenure, retirement, reappointment and extension of the army chief or a general of the army.

“The learned attorney general has categorically assured the court that this practice being followed is to be codified under the law and undertakes that the federal government shall initiate the process to carry out the necessary legislation in this regard.”

The court told the government that if the legislation was not passed within the given time, the army chief’s reappointment would become illegal.

During the hearing, Attorney General for Pakistan (AGP) Anwar Mansoor Khan submitted a new summary of the draft notification to the court for an extension in Gen Qamar’s tenure prepared by the government a day earlier.

After the court proceedings adjourned on Wednesday, Prime Minister Imran Khan had called an emergency huddle of his legal team at his office – attended by the army chief and senior ministers – after which a fresh summary was drafted.

However, the CJP took strong exception to the mention of the court’s proceedings in the draft notification.

“Bear your own burden, why are you using our name,” Justice Khosa told the AGP. The government should do its own work. Why are we [the court] being dragged into this?”

The chief justice also raised the question as to how could the army chief be appointed when he was already occupying the post.

However, Justice Khosa observed that the government’s legal team had put in a lot of effort to prepare the new draft and directed the AGP to omit the court’s mention from the document. “Take out the part about the court’s advice,” he remarked. “It’s a different matter if the president seeks our advice,” he added.

Speaking about the Gen Qamar’s participation in the meeting on Wednesday, the CJP remarked that the army chief had to focus on the country’s defence. “He [army chief] cannot sit with you and assist you in drafting summaries,” he added. “It’s a waste of time and energy.”

At the start of the proceedings at 9:30am, the court directed the AGP to submit documents related to the retirement of former army Gen (retd) Raheel Sharif and the extension of Gen (retd) Ashfaq Parvez Kayani.

A brief adjournment then took place to provide time to the attorney general for submission of the documents.

Going through the documents after resuming the hearing, the CJP noted that they neither mention who had granted an extension to Gen Kayani, nor under which law the step had been taken. “There shouldn’t be any confusion over such an important post,” Justice Khosa remarked.

“How is the reappointment, which took place today, different from the previous ones?”

The attorney general informed the court that Gen Qamar had been reappointed under Article 243. Justice Khosa told him to convince the court that this was in accordance with the law.

The top judge pointed out that extensions in tenure were taking place in the past as well but nobody had taken notice of them.

“No one is watching what is happening in cantonments. Under which law is this practice continuing? Now a constitutional institution is reviewing this matter. The procedure for reappointment should be clearly defined,” he added.

The CJP as well Justice Mansoor Ali Shah observed that Article 243 did not specify a period of three years as the tenure for an army chief.

“If an extraordinary general is found tomorrow, will he be appointed for 30 years?” Justice Khosa asked. “The government may also want to appoint the next army chief for a year.”

Justice Shah observed that the attorney general had earlier maintained that general did not retire despite the bench telling him otherwise.

“The summary neither mentions the army chief’s salary, nor his perks,” he noted. “The attorney general must have read the laws regarding the army for the first time as well.”

Referring to the instructions for new legislation to be drafted in this regard, the CJP said: “We are not telling you to pass the legislation immediately. A law which has not been drafted for 72 years cannot be formulated in such as hurry.”

The CJP also regretted that a smear campaign had been launched against judges hearing the case. “It is being said that the three judges hearing this matter are CIA agents and pushing Indian agenda,” he lamented.

The AGP replied that the case had come under the spotlight in India and the social media was not under anyone’s control. Justice Khosa noted that a constitutional office becoming controversial was unfortunate, but “it is our right to ask questions”.

Earlier, the Pakistan Bar Association restored the licence of Barrister Farogh Naseem, who stepped down as law minister to represent Gen Qamar in the case. He was told by the court to settle the issue of his licence or come with a subordinate if he wanted to represent the army chief. 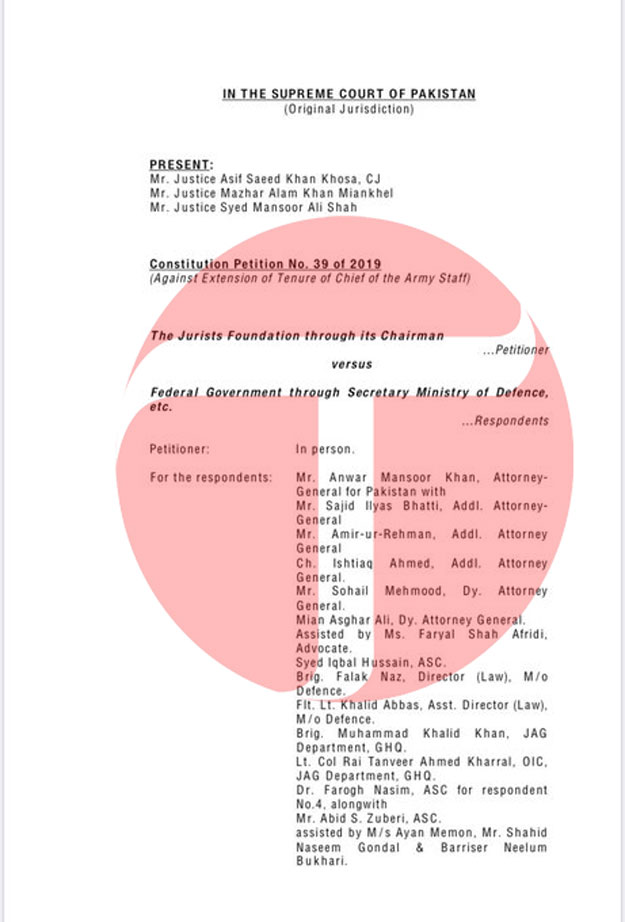 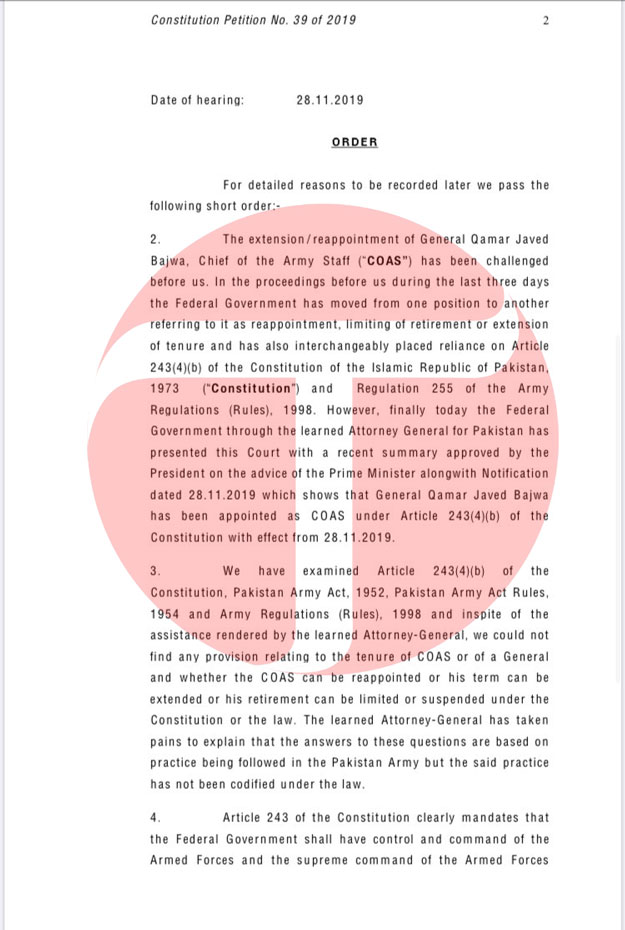 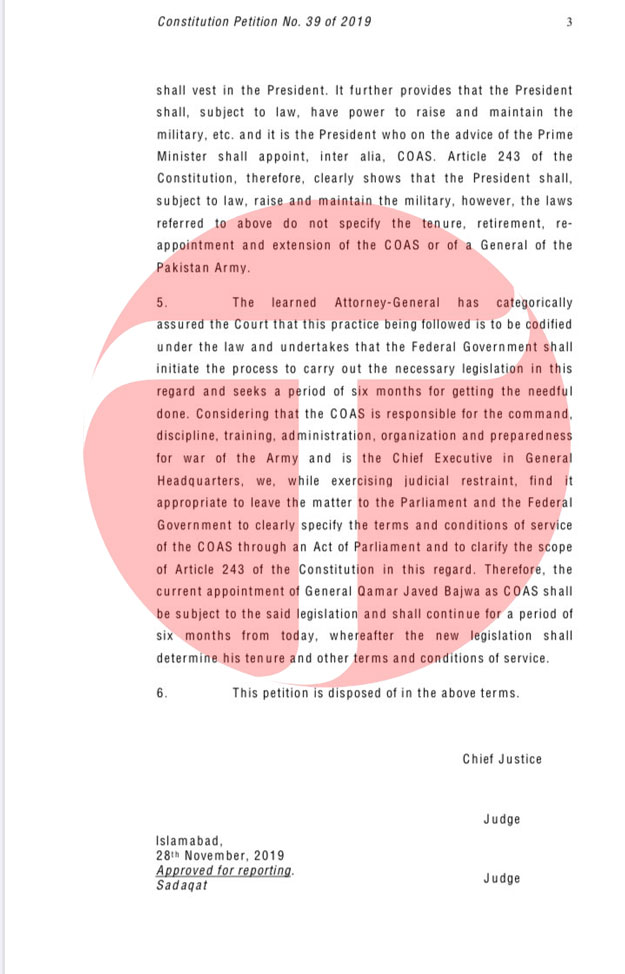