It was the fastes­t four-goal haul in the compet­ition's histor­y and makes the forwar­d the top scorer in Europe so far
By AFP
Published: November 27, 2019
Tweet Email 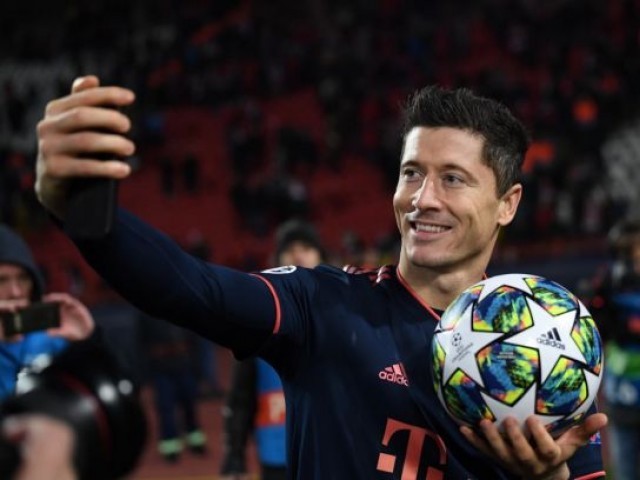 It was the fastest four-goal haul in the competition's history and makes the forward the top scorer in Europe so far. PHOTO: AFP

BELGRADE: Robert Lewandowski made Champions League history with four goals in 15 minutes as managerless Bayern Munich romped to a 6-0 win at Red Star Belgrade on Tuesday.

It was the fastest four-goal haul in the competition’s history and makes Lewandowski the top scorer in Europe this season with 10 goals in five games.

He also saw a first-half strike ruled out by VAR for a handball in the build-up.

“The most important thing is that we played really well, defensively and on the attack,” Lewandowski told Sky.

“It doesn’t matter who plays, we follow the same plan.”

“I am just as happy when I don’t score and we win,” he added having failed to score in Saturday’s 4-0 win at Fortuna Duesseldorf for the first time in Bayern’s 12 league games this season.

Leon Goretzka and Corentin Tolisso also got on the score-sheet in Belgrade, but the night belonged to Lewandowski.

His spectacular goal burst in Belgrade was reminiscent of the five goals he scored in nine minutes in Bayern’s 5-1 Bundesliga home win over Wolfsburg in September 2015.

The Poland striker now has 27 goals in 20 games for Bayern this season.

Having routed Tottenham 7-2 in London in October, when Serge Gnabry scored four goals, this was another memorable night for Bayern.

Bayern earned their fifth straight win in Europe, having already qualified for the last 16 in the previous round of matches.

They are on course to become the first German club to win all six group stage games before they host Spurs at the Allianz Arena in a fortnight’s time.

Interim coach Hansi Flick has now won all four matches since Niko Kovac was sacked earlier this month — with 16 goals scored and none conceded, giving him the best managerial start in the club’s history.

Lewandowski has scored seven goals since Flick took over.

“It’s all down to how incredibly professional he (Lewandowski) is and the way he trains,” said Flick.

“He is always doing extra sessions to improve. He’s really on a run right now.”

Flick has been told he will stay in charge until at least the winter break, which starts December 22, but will now be a top candidate to get the job permanently.

“Compliments to my team, we showed we wanted to win the group from the first minute,” he added.

“In the first half, we passed up a few chances, but in the second half we were much more efficient.”

Flick had opted to rest Joshua Kimmich and Gnabry, but Goretzka gave Bayern a dream start by heading home a curling Philippe Coutinho cross from the right on 15 minutes.

It could have been 2-0 to the visitors on 41 minutes when Lewandowski hit the top right-hand corner with a superb strike, but VAR spotted a Tolisso handball in the build up.

Bayern should have been further ahead than 1-0 at the break having fired 15 shots at the Belgrade goal, while winning 12 corners with 71 percent possession.

Lewandowski’s stunning goal haul began when the referee awarded a penalty on 53 minutes for a handball by Red Star centre-back Milos Degenek.

Lewandowski sent Borjan the wrong way and then added his second seven minutes later with a classic striker’s goal — stabbing the ball home after a header from Tolisso.

Coutinho made way for Ivan Perisic for the final half-hour.

Lewandowski wrapped up his hat-trick inside 11 minutes by heading home a Benjamin Pavard cross, than bagged his fourth when he exchanged passes with Perisic and fired past the helpless Borjan on 68 minutes.

Having earlier been denied a goal when his shot clipped the bar, Tolisso finally netted when he capped a strong display with a goal in the 89th minute after good work by Perisic.