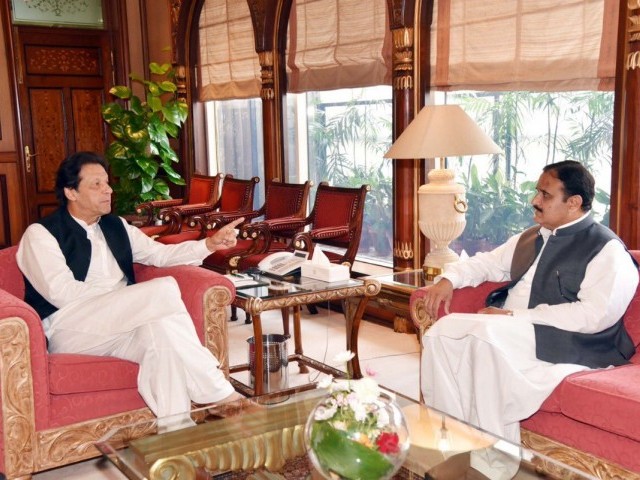 LAHORE: Days after faulting the top civil servants for ‘poor governance’ in Punjab, the prime minister has reshuffled the provincial bureaucracy, replacing the provincial police chief and chief secretary.

“Major (retd) Azam Suleman Khan, a BS-22 officer of the Pakistan Administrative Services, presently posted as Secretary, Interior Division, is transferred and posted as Chief Secretary, Government of Punjab, with immediate effect and until further orders,” reads a notification issued on Tuesday.

Suleman is expected to assist Chief Minister Usman Buzdar, who has been criticised by his PTI colleagues and opposition alike for his “naivety” to run the provincial government.

Prime Minister Imran Khan has defended Buzdar, a political novice, and blamed the bureaucracy which he believes still has loyalists of the Sharif family which has ruled Punjab for several years.

Suleman has replaced a BS-22 PAS officer Yousaf Naseem Khokhar, who, too, was serving as secretary Interior Division before assuming the charge of Punjab chief secretary back in October 2018.

The prime minister had hinted at a reshuffle in the provincial bureaucracy during a meeting of the PTI core committee on Sunday, while expressing dissatisfaction with the provincial administrative structure. He believes ‘weak governance’ in Punjab is not allowing the masses to benefit from the government’s policies.

Suleman, according to a government official, would be holding a meeting with CM Buzdar on Wednesday after taking up his new assignment. Major administrative changes in the province are likely to be finalised in the meeting.

The official said the Punjab government has to perform, so that the common man could benefit from the government initiatives.

Suleman, who joined the civil services on August 31, 1990, had also served as the chief secretary Sindh, and as the additional chief secretary Punjab during the PML-N’s government. He is considered to be a man of integrity who refuses to give in to pressures.

In 2018, when Suleman appeared to be the possible choice of the federal government for chief secretary Punjab, the Pakistan Awami Tehreek had reportedly requested PM Imran against his appointment stating that he was one of the 12 officials accused by the families of the victims of Model Town incident of 2014.

PAT Secretary General Khurram Nawaz Gandapur, according to reports, had told the prime minister in a letter that “Suleman was the province’s home secretary when the Model Town incident had happened.”

The federal government also replaced the provincial police chief for the fifth time in its tenure, replacing Captain (retd) Arif Nawaz, who was serving as Inspector General Police for the second time, with Shoaib Dastgir.

According to the notification, Shoaib Dastgir, a BS-21 officer of Police Service, presently serving as National Police Foundation (NPF) Managing Director under Interior Division was transferred and posted as Provincial Police Officer (PPO), Government of Punjab, in his own pay and scale, with immediate effect and until further orders.

Earlier in the day, the Punjab government had sent a summary to the Establishment Division recommending new IG to be selected from the three recommended names, including Shoaib Dastgir, Mushtaq Mahar, and Ahmad Latif. Dastagir has previously served as IGP AJK.

According to reports, more changes are expected in the police department after a meeting between the chief minister and new IG.

Interestingly, it is the fifth time CM Buzdar has changed the police chief during his 15 months in the office.

First, Dr Kaleem Imam, who had been appointed IG before the PTI formed its government in Punjab, was changed on September 8, 2018 – a month after CM Buzdar assumed his office.

Imam was then replaced with Muhammad Tahir, who was changed within a month on October 10, 2018 after the government initiative to introduce police reforms fell flat.

Little respite even as prices of essentials recede