Today, she leads the way for others to achiev­e their dreams
By Kashif Hussain
Published: November 25, 2019
Tweet Email 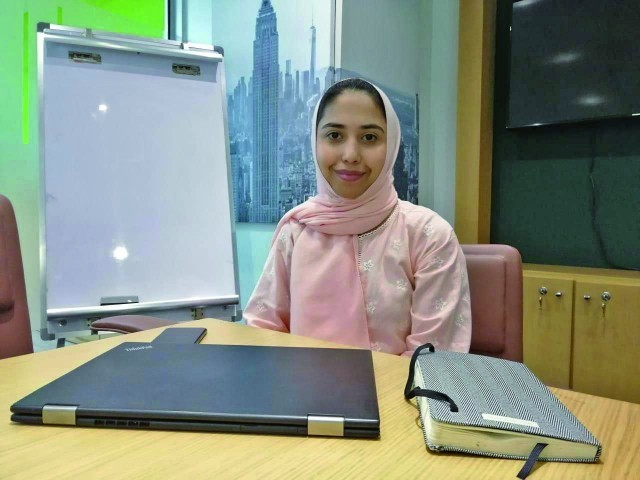 Javeria Farrukh wasn’t deterred when she found that the predictable career path after her BBA was not to her liking. She managed to carve her career in information technology and counseling without formal education in the two fields. photo: express

KARACHI: Javeria Farrukh, a public speaker, graduated from one of the top-ranked universities of Pakistan, the Institute of Business Administration (IBA) in Karachi. Yet, after completing her BBA, she found herself at a crossroads – she was presented with many career options but none to her liking.

To add to it, she found herself at the receiving end of “unwarranted advice.” Recalling that period of her life, she said she was advised to get admission into a MBA programme, opt for a profession from a selected few considered “suitable” for females and if nothing else, then get married.

“By that time, I seriously doubted whether I will ever be able to choose the right profession,” she said. But she did, and even so an unconventional one, opting to work in the largely male-dominated field of information technology, which eventually led her to help other students, particularly females, fight a similar battle she had fought – of making the right career choice.

Farrukh completed her undergraduate degree in 2013, following which she worked at a healthcare company for three years. Later, she switched her job and moved to a digital media company where she worked in the administration department.

While working for these companies did little to help Farrukh achieve her aspirations, according to her, the experience increased her self-confidence and helped her realise her talent as well as what she actually wanted to do.

“Consultancy, technology, business strategy, healthcare, education and enterprising interested me, particularly in terms of their impact on the society and economy,” she said. Whereas the thought of “wasting time behind a computer screen, dealing with numbers and making excel sheets” was nothing less than nightmarish, she said.

The realisation, though dawned a little late, sufficed to spur her to switch to a profession of her liking.

Farrukh aspired to work in the healthcare and education sectors, “but back then, the idea of an IBA graduate opting to work in these fields was peculiar to many,” she said.

Technology too appealed to her and it was one of the areas she wanted to make a mark in, however, Farrukh was expressly told by many that technology is not for women.

“Few women worked in the technology sector back then and people told me that opting for the field would not be practical,” she recalled. They warned her of slow career growth and doubted that she would be able to succeed working the field, Farrukh said.

Speaking in a broader perspective, Farrukh said it is not only her. Many women aren’t able to showcase their talents and abilities due to restrictions as a consequence of social norms, and they end up choosing the wrong profession, she lamented.

She, however, realised that all that mattered for her to succeed was having confidence in her talent and abilities. “That is the only way for a woman to make a place for herself in an otherwise male-dominated field, considered unsuitable for women,” she said.

Speaking about her decision, Farrukh said, “I had a choice- whether to trust myself or let others’ words shake my confidence. It was hard and took me some time but I eventually made the right choice.”

Firm in her decision to make a career change, Farrukh had started looking up opportunities for enrolling in a Masters programme at a university abroad. It was then that she stumbled upon an advertisement by IBA’s Career Development Centre, seeking applications for participating in a training programme by a Germany-based software company, SAP.

Farrukh, who was intrigued by the advertisement, finding it strange that a software company would seek applications via a varsity, anyhow, applied for the programme. Some days later, she received a call from the company and was informed that she had been selected to partake in a boot camp, which was to be held in Islamabad.

It was a fresh start for her, though a scary one. She feared that she would fail miserably in competing with her peers, most of whom had a technology background. However, once she began enjoying the learning experience at the boot camp, she gradually overcame her apprehensions. By the end of the camp, she was confident about working in the technology sector more than ever.

In March 2017, she got another call for a final interview and a few days later she was flying all the way to California, where she was to receive further training under the banner of SAP.

During her time in California, Farrukh met people from different nationalities and cultures, which broadened her horizons.  Also, working for an international organisation helped her shape her personality as she realised how being presented with opportunities of career growth can help individuals, particularly women, build their self-confidence.

In her words, “It was a life-changing experience.”

Giving back to society

After she returned from California, Farrukh began working in the health and education sector, but more so in the latter.

She believes that all students should be presented with good opportunities for career development and growth and in order to facilitate them, she approached her alma mater, offering her services for counselling and consultation.

Since 2018, she has been giving guest lectures at the varsity, not only imparting knowledge to the students but sharing her experience with them, ensuring that they receive the guidance that she was deprived of as a student. Moreover, she has founded the ‘Business Women Network Pakistan’, in affiliation with SAP, with the objective to increase women’s participation in the technology sector.

Farrukh has come a long way, in a relatively short period of time, paving her way to success and today she leads the way for many others, helping them make courageous choices and achieve their dreams.

‘Women on Wheels’ kick-starts in Karachi