The crisis is the worst in three decade­s of Chilea­n democr­acy
By AFP
Published: November 23, 2019
Tweet Email 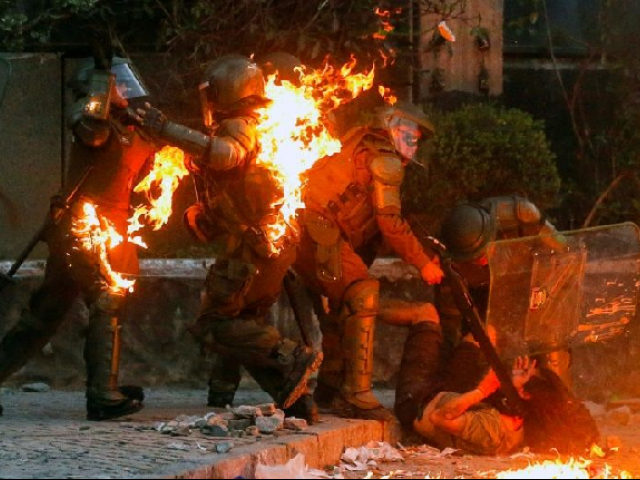 A demonstrator is held while a petrol bomb hits riot police during a protest against the government in Santiago. PHOTO: AFP

SANTIAGO: The death toll from violent unrest in Chile rose to 23 on Friday as the country entered its fifth week of social unrest.

Looting and demonstrations took place in cities across the South American nation, and an agreement on a political roadmap that will see Chile draft a new constitution has halted neither the anger, nor the bloodshed.

Furious Chileans have since October 18 been protesting social and economic inequality, and against an entrenched political elite that comes from a small number of the wealthiest families in the country, among other issues.

The crisis is the worst in three decades of Chilean democracy and has led to around 2,000 injuries, including some 280 people who suffered eye damage from shotgun pellets.

The latest death was a 13-year-old boy who an interior ministry official said was run over by a van during protests in Arica, about 1,300 miles (2,100 kilometers) north of the capital Santiago.

Thousands of people gathered again on Friday in Plaza Italia, the center of the demonstrations in Santiago and the site of weekly rallies that have seen massive turnout since the social upheaval broke out.

“We cannot ease up. We have to keep expressing ourselves because we have not achieved anything, because the repression continues and also (the government) keeps signing fake agreements, like the peace deal,” Claudia Ortolani, a young protester, told AFP.

Nearby, hooded men were squaring off against police, who broke up the crowd with tear gas and water cannons.

Meanwhile, about a hundred people protested outside the Costanera Center, the largest mall in South America, as around twenty riot police guarded the entrance to the building.

While protests earlier in the week not been huge, the outbursts of violence multiplied in the capital’s metro area on Thursday and Friday.

The anger in the streets had eased after last week’s agreement by Congress to draft a new Constitution.

But with people back on the streets in force again, President Sebastian Pinera’s government again appealed for calm.

Interior Minister Gonzalo Blumel issued a “deep and sincere call to all political forces” to end the unrest.

But in Quilicura, north of Santiago, a shopping center was set on fire and looted by a crowd while in Puente Alto, another working-class area, a gas station, a police headquarters and businesses were attacked.

In the northern city of Antofagasta, a motorist injured five people when he ran down protesters, while a supermarket was ransacked.

Looting, barricades and fires were also recorded in the port of Valparaiso and the city of Vina del Mar, and in Concepcion in the south.

“This situation … affects our offer to take charge,” said police general Enrique Basseletti, after complaints from people irate that they had not seen police on their streets.

Blumel said that 2,500 trainee police officers would be put on the streets early to bolster the force.

On Thursday, authorities arrested 700 people in the unrest. That followed the police decision to suspend the use of birdshot against protesters, following an outcry over eye injury victims.