Morale­s, who had been seekin­g a fourth term, claime­d he won the vote, but opposi­tion groups said it was rigged­
By AFP
Published: November 23, 2019
Tweet Email 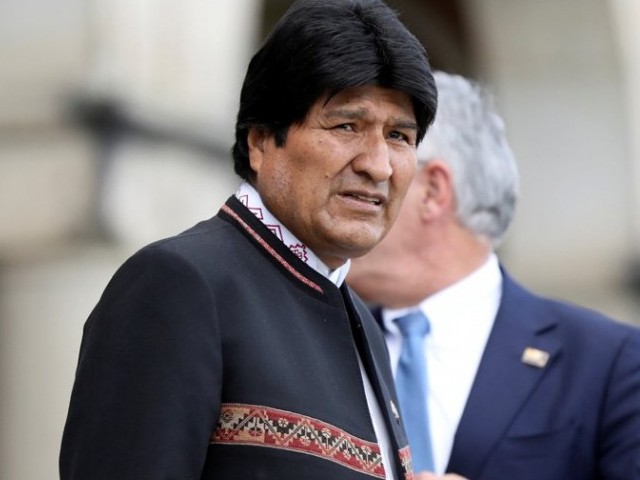 LA PAZ: Bolivia’s caretaker government on Friday filed a complaint accusing Evo Morales of “sedition and terrorism” after the ex-president allegedly called on supporters to maintain blockades in the crisis-hit country.

Interior Minister Arturo Murillo referred the case to federal prosecutors in La Paz, which has been choked by road blocks for weeks, causing food and fuel shortages in the seat of government.

In a separate announcement late Friday, the interim government said it would hold talks with protest groups Saturday in the hope of striking an agreement “to pacify the country” and end its worst political crisis in 16 years.

“We are seeking the maximum penalty for sedition and terrorism,” Murillo told reporters after launching legal action against Morales.

If Morales — who fled to Mexico after resigning on November 10 — were charged and convicted, he would face a maximum penalty of 30 years in jail.

The legal action against Bolivia’s first indigenous president comes as Congress debates when to hold new elections seen as crucial to quelling weeks of unrest that erupted after the disputed October 20 ballot.

Morales, who had been seeking a fourth term, claimed he won the vote, but opposition groups said it was rigged.

A poll audit by the Washington-based Organization of American States found irregularities in the results.

At least 32 people have been killed since the election, including 17 in clashes with security forces as anti-government protesters block main roads.

Morales has accused Bolivian security forces of engaging in “genocide” against his indigenous supporters, and called for action by the international community.

The legal action comes after Murillo played a telephone recording to journalists on Wednesday, allegedly of Morales issuing instructions to a leader of the opposition movement in Bolivia.

Morales’s order was a “crime against humanity,” Murillo told reporters Wednesday, accusing the ex-president of “terrorism.”

Bolivia has lodged a formal protest to Mexico over Morales’s remarks, saying they “contravened” his political asylum status, the foreign ministry said Thursday.

Morales, who claims to have been a victim of a coup after losing the support of the security forces, tweeted Friday — several hours before Murillo filed the complaint — that the investigation was based on “planted evidence and manipulated recordings.”

Political consultant Ivan Arias told AFP the probe could make Morales’s  supporters even more loyal to the ex-president or lead them to think “Evo is already history.”

Right-wing Senate speaker Jeanine Anez, who declared herself interim leader after Morales quit, on Friday called on anti-government protesters to “let us govern” and lift the road blocks around La Paz.

Anez and her ministers will meet with opposition groups at the presidential palace on Saturday at 2000 GMT in an attempt to reach a deal to lift the crippling blockades and end the unrest, Public Works Minister Yerko Nunez told reporters.

Congress must approve a law that would allow for new elections. It also needs to agree on a new seven-member electoral court, after members of the previous panel were charged with manipulating results.

Many Bolivians are fed up with the violence and want new elections in the hope they will stabilise the country.

“If (Anez) calls elections everything will calm down and hopefully this time there will be no fraud and everything will be transparent,” Tatiana Vicuna, 18, told AFP in La Paz.

In the latest unrest on Thursday, police tear gassed indigenous protesters who marched on La Paz with the coffins of five of the eight people killed in clashes at a key fuel plant Tuesday.

The protesters from El Alto, a Morales stronghold near La Paz, branded Anez a “murderer” and called for her to resign.

The killings have deepened divisions between indigenous people loyal to Morales and Bolivia’s mainly city-dwelling middle and upper classes.

The United States on Thursday suggested that Morales should stay out of upcoming elections, which should be “free, fair and transparent.”