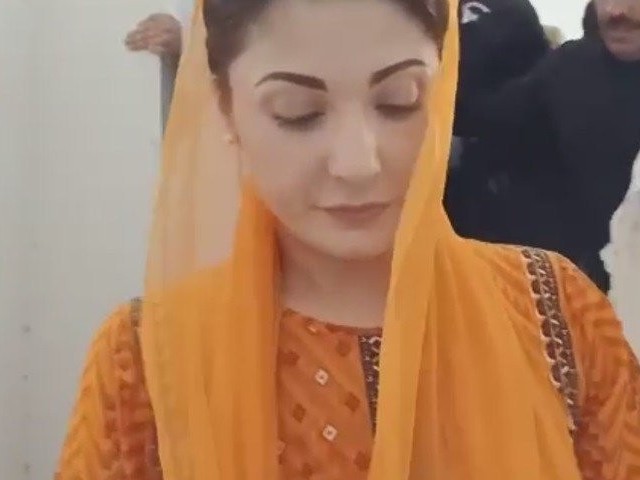 LAHORE: Maryam Nawaz, one of the more outspoken leaders of the Pakistan Muslim League-Nawaz (PML-N), continues to maintain her silence that, coupled with the statement of the prime minister regarding being confused about Nawaz Sharif’s medical condition, has given rise to speculation that an understanding has been reached with the country’s powerful elite – a silence, however, which the PML-N believes won’t last long if the prime minister continues his tirade against her father.

According to PML-N spokesperson Marriyum Aurangzeb, the former prime minister’s daughter is under mental strain due to her father’s illness, adding that, for Maryam, her father came first and thus, at this point in time, her entire focus was on his health.

She said that, as a daughter, her father’s illness was a matter of great concern for her and, therefore, she would speak only when she was emotionally well. The PML-N spokesperson also rejected all speculation attributed to Maryam’s silence.

This is not the first time Maryam has gone silent after her incarceration. This is also not the first time her silence and freedom are being attributed to a deal. Last year, after the suspension of her sentence and those of her father and husband in the Avenfield case, which had come only a few days after her mother’s death, she had also gone completely silent.

Initially, that silence had been attributed to her mother’s demise but, later, after the 40-day mourning period, senior PML-N leaders had given their own interpretation of her silence, with former Sindh governor Muhammad Zubair stating that Maryam’s silence was aimed at avoiding out-of-court troubles and Senator Pervaiz Rashid simply saying that the time was not right for her to make a political appearance.

Such statements, coupled with a startling revelation by senior PML-N provincial leader Rana Mashhood, who had claimed that his party had struck a deal with the establishment – which was quickly rejected by the party – had fuelled the speculation regarding a deal. As was the case then, the party is now claiming Maryam is silent due to her father’s health, who is currently in London for medical treatment.

A PML-N source said that, given the overall current situation, it was not in the Sharif family’s best interest for Maryam to start making political statements just yet, adding that she would continue to maintain her silence until the situation settled. However, the source made clear that, if the prime minister continued with his tirade against Nawaz Sharif, she would be forced to rethink her approach and may break her silence.

It is pertinent to mention here that the authority to extend Nawaz’s eight-week bail, granted by the Islamabad High Court (IHC) on medical grounds on October 29, rests with the Punjab government, as per court orders.

According to PML-N sources, the party may even consider approaching the court again on the matter of extending Nawaz’s bail instead of the Punjab government, saying that, since the prime minister still doubted Nawaz’s medical condition, it was obvious how applying for an extension to the Punjab government would go.

The party’s doubts about receiving a fair hearing on Nawaz’s health are rooted in statements such as the one made by the prime minister at a groundbreaking ceremony for multiple projects in the health, education, water and communications sectors in Mianwali on Friday, where he said, “When I saw him boarding the plane, I was baffled. His medical report came to my mind and I wondered how he had recovered so quickly. His kidney had not been working and he had diabetes. Did he recover upon seeing the plane or did the British air touch him?” asked the PM. He further said he would not make a deal nor give any relaxation to this “mafia” as that would amount to treason, adding that he did not wish to save his ‘chair’ but to bring change in Pakistan.

Foreign funding case: If found guilty, PTI may only face confiscation of funds