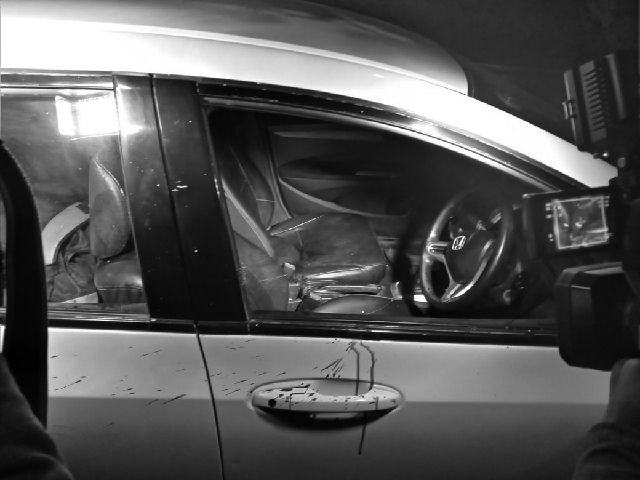 The car the victims were in when the shooting took place. PHOTO: EXPRESS

A person was killed and another injured late Thursday after police officials opened fire on a vehicle in Karachi’s Frere Hall area.

The police officials claimed that they were on patrol when they saw a vehicle and hailed it to stop, instead, the vehicle accelerated and drove off.

However, the police officials reportedly opened fire without just cause. Addressing the media, SSP South Shiraz Nazir said the responsible officials were detained after the incident.

“Evidence suggests that the car stopped in front of Frere Hall, after which police opened fire,” added the senior police official.

The bullet struck the neck of the deceased, identified as Nabeel Hoodboy, and the same bullet then hit the arm of his friend Raza Imam.

Earlier this year, a two-year-old child was fatally shot during an encounter between police and dacoits in Karachi.

Police claimed that the infant was killed in an exchange of fire between the law enforcement agency and robbers who were looting citizens.

Four police officials were taken into custody after the incident.