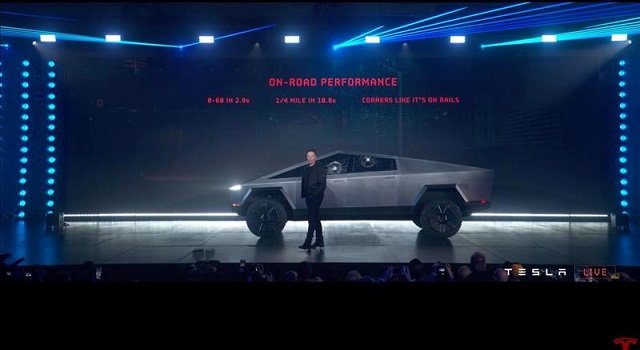 Tesla Chief Executive Elon Musk stands in front of the company's first electric pickup truck, the Cybertruck, after it was unveiled in Los Angeles, California, US, November 21, 2019, in this frame grab made from the livestream of the unveiling event. PHOTO: REUTERS

Tesla unveiled its electric pickup truck with a futuristic angular body in gunmetal grey that looked like an armoured vehicle, as the California company took aim at the heart of Detroit automakers’ profits.

With a starting price of $39,900, the cyber truck is less expensive than initially flagged but its polarising design could limit sales in a segment symbolic of a rugged, practical American lifestyle.

At a launch event in Los Angeles, Tesla Chief Executive Elon Musk said other versions will be priced at $49,900 and $69,900 with the most expensive offering a range of more than 800 km. Production is expected to begin around late 2021.

The truck’s hulking sharp geometric body was made from stainless steel, set atop massive tires and had windows made from armoured glass.

Musk claimed the truck’s “ultra-hard” exterior “won’t scratch and dent”. But the armoured glass window cracked like a spider web when hit with a metal ball during a demonstration. Musk appeared surprised although he noted the glass had not completely broken.

When everything’s going wrong but you still gotta finish your presentation #Cybertruck pic.twitter.com/bxEGe5nTvW

I don’t understand what the fuss is about the Tesla #Cybertruck. It looks ok to me. pic.twitter.com/8vBl1jS74T