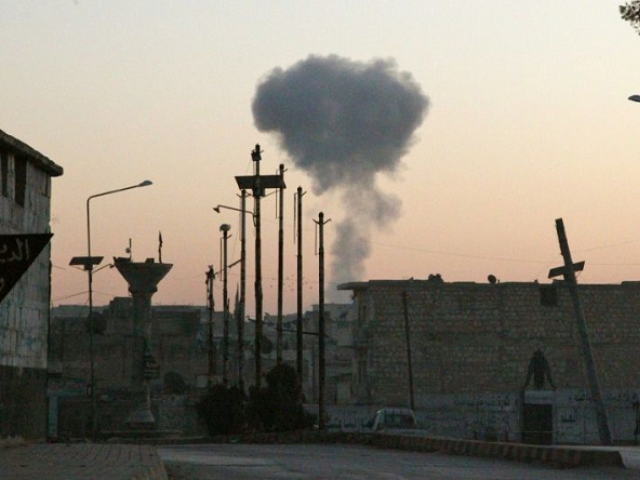 The Syrian Observatory for Human Rights, in an updated toll, said a ground-to-ground missile fired by regime forces that hit a makeshift camp for the displaced near Qah village close to the border with Turkey killed 15 civilians, including six children, and wounded around 40 others.

The missile crashed near a maternity facility in the camp, it said.

Elsewhere, “Russian military aircraft” targeted the town of Maaret al-Numan in the south of the province, the Observatory said, and “six civilians were killed, among them four children”.

A number of people were wounded in the raid, some “in a critical state”, and the toll there was likely to rise, the Britain-based monitor’s head Rami Abdel Rahman reported.

A photographer who works with AFP saw rescue workers retrieve the dust-covered body of a girl from debris and place her in an ambulance.

The northwestern Idlib region is dominated by militants of the Hayat Tahrir al-Sham group (HTS), formerly the Syrian affiliate of Al-Qaeda.

Most of Idlib province remains out of the control of the Syrian regime, as do adjacent areas of Aleppo, Hama and Latakia provinces.

These areas are also home to other militant groups and factions.

The Observatory has a wide network of sources on the ground and determines those responsible for such raids by the type of aircraft and weaponry used, as well as their flight plan.

Between the end of April and the end of August, Idlib was pounded ceaselessly by Syrian soldiers backed by Russian air power.

The Observatory estimates that nearly 1,000 civilians were killed in that period, and the UN says that more than 400,000 people were displaced.

Moscow announced a ceasefire at the end of August, but the Observatory says there have been sporadic attacks since then, and that dozens of civilians have been killed.

On October 22, in his first visit to the embattled northwestern region since 2011, Assad said defeating militants there was the key to ending the country’s eight-year-old civil war.

The war in Syria has killed more than 370,000 people and displaced millions.