He adopte­d the leadin­g role and touted his close ties to the presid­ent
By AFP
Published: November 20, 2019
Tweet Email 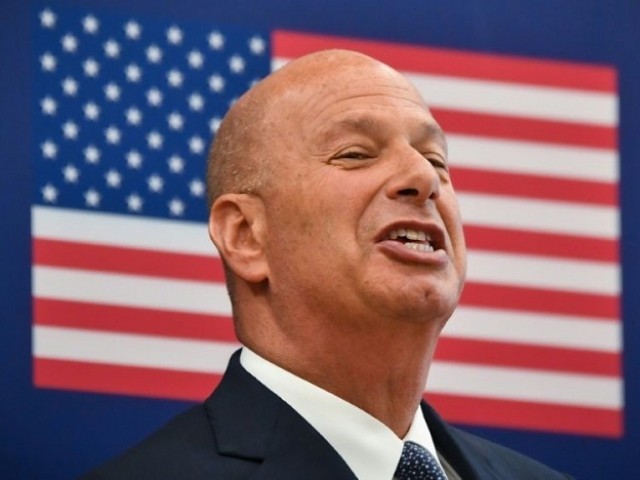 Gordon Sondland, the US ambassador to the EU, has emerged as a key witness in the impeachment inquiry into President Donald Trump. PHOTO: AFP

WASHINGTON: Gordon Sondland, the wealthy owner of a chain of boutique hotels, donated $1 million to President Donald Trump’s inaugural committee and was rewarded with the plum post of US ambassador to the European Union.

Sixteen months after moving to Brussels, the 62-year-old Sondland finds himself in the eye of the hurricane that is the impeachment hearings.

“This has been a very bad experience for me,” the tall, balding political appointee said during a first round of questioning last month by the House committees investigating whether Trump should be removed from office.

It’s about to get worse.

Sondland is set to testify again on Wednesday — this time before the House Intelligence Committee and a live television audience — and new revelations since his closed-door appearance have turned up the heat on the EU envoy.

Sondland’s presence at the centre of the storm is somewhat bizarre in that senior US diplomats have expressed puzzlement over why he was so deeply involved in the affairs of a non-EU member state in the first place.

Taylor’s remarks were echoed by two other high-ranking State Department officials — George Kent, deputy assistant secretary of state for European affairs, and the former US ambassador to Ukraine, Marie Yovanovitch.

“I think it’s somewhat unusual to have an ambassador to the EU, plus the secretary of energy, engaged deeply in the policy towards a country that is not a member of the EU,” said Kent.

Sondland, Energy Secretary Rick Perry and Kurt Volker, the US special envoy to Ukraine, dubbed themselves the “Three Amigos” and claimed to be coordinating US policy towards Ukraine at the direct request of the White House.

Sondland adopted the leading role and touted his close ties to the president.

Fiona Hill, the former senior director for Europe and Russia on the National Security Council (NSC), testified that Sondland told her in June that he was in charge of Ukraine policy.

“And I asked, well, on whose authority?” Hill said. “And he said, the president.”

A key thrust of that policy — getting Ukraine to carry out an investigation of potential 2020 Democratic presidential candidate Joe Biden — is what has Trump facing the threat of impeachment and Sondland in hot water.

In a July 25 telephone call, Trump asked Ukrainian President Volodomyr Zelensky to “look into” Biden and his son Hunter, who served on the board of a Ukrainian gas company.

In his closed-door testimony, Sondland professed to have only limited knowledge of Trump’s desire for a probe into the Bidens but what has emerged since then is that he was much more intimately involved in carrying out the president’s wishes.

David Holmes, the political counselor at the US embassy in Kiev, directly tied Sondland to Trump’s request for an investigation into the Bidens.

In closed-door testimony, Holmes related a telephone call he overheard at a Kiev restaurant between Sondland and Trump — a conversation likely to loom large at Wednesday’s hearing — in which he heard the president ask if Zelensky is “gonna do the investigation?”

“Ambassador Sondland replied that ‘he’s gonna do it,'” Holmes said of the call, which came a day after the Trump-Zelensky conversation.

Zelensky will do “anything you ask him to,” Holmes quoted Sondland as saying.

Sondland’s desire to do Trump’s bidding also figured prominently in testimony by Yovanovitch, who was ousted as US ambassador to Ukraine in May.

Yovanovitch said she had asked Sondland for advice when she became the target of what she described as a “smear campaign” led by former New York mayor Rudy Giuliani, Trump’s personal attorney.

“He said he was close to the president,” Yovanovitch said. “He suggested that I needed to ‘Go big or go home.’

Impeachment: the allegations against US President Donald Trump

“He said that the best thing to do would be to send out a tweet, praise the president, that sort of thing,” the career diplomat said, adding that she declined to follow his advice.

Sondland, whose tribulations have become fodder for late-night comedians, landed in his current predicament through a rather circuitous route.

A “lifelong Republican,” Sondland is the Seattle- and Portland-based chairman of the Provenance Hotels group, which owns 19 hotels around the United States, mostly in the Pacific Northwest.

He supported former Florida governor Jeb Bush’s bid for the 2016 Republican presidential nomination before switching his allegiance to Trump, the eventual nominee, and donating to his inaugural committee.